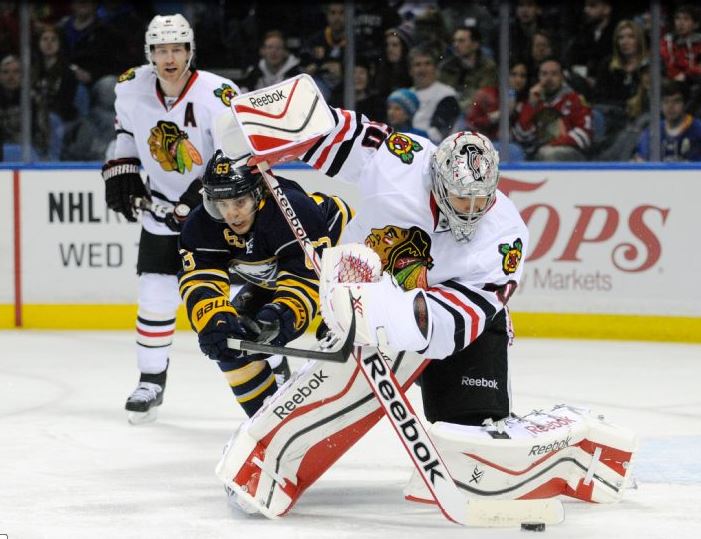 Patrick Kane and Jonathan Toews scored in the same game for the 51st time in their careers, and those two goals were enough as the Hawks edged the Sabres in Kane’s home town.

Niklas Hjalmarsson played a magnificent game, officially blocking three shots but interrupting a number of others. In one series, he was knocked to the ice by a shot and lost his stick. He staggered back to his feet and blocked another shot before hobbling to the bench for a chance.

The Hawks blocked eight shots as a team, led by three from Hjalmarsson and four from Brent Seabrook. Only 21 shots found the net, and Corey Crawford successfully stopped 20 of them to earn his 25th victory of the season.

Kane started the game with his 28th goal of the season, a dazzling move through traffic that made the fans in Buffalo applaud the “visiting” star. Drew Stafford, a college teammate of Toews’ at North Dakota, tied the game later in the first for his 11th on the season.

Neither team scored in the second period, and Toews scored his 25th of the season in the third for the game-winner. Toews also won 10 of 16 faceoffs in the game.

Bryan Bickell skated a team-low 7:22 in the game and accounted for nothing in the box score. New defenseman David Rundblad skated only 10 shifts and 7:38 in his first action since being acquired. Peter Regin (7:32) was also held under eight minutes of ice time in the game.

The Blackhawks have killed 18 of 19 penalties since the Olympic break, including all five on Sunday night.

After limping into the Olympic break, Crawford has been strong since returning to action. He has allowed only one goal in three of the five games the Hawks have played since the break, and allowed only two in another. The Hawks are 3-2-0 since the break, but one of their losses came against their next opponent.

The Hawks are off until Wednesday night, when they travel to Denver for a potential playoff preview against the Avs.