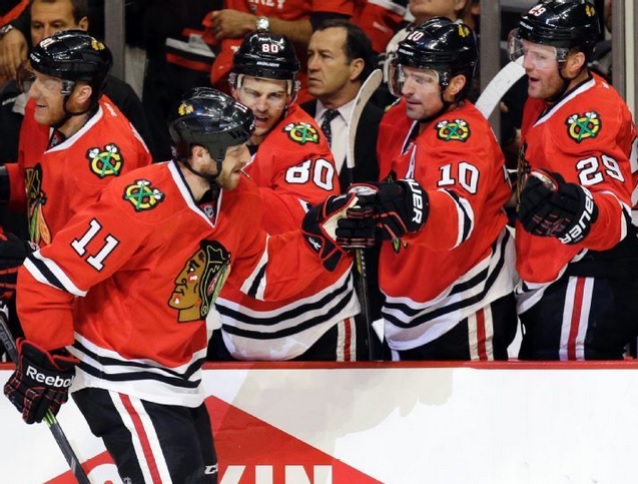 After struggling to get a lead in the first two games of the series, the Blachawks couldn’t hold onto one in the opening 21 minutes of Sunday afternoon’s game. But a stronger team effort for the final 18 minutes of the second period gave the Hawks enough breathing room to put the Preds away and take a 2-1 series lead.

The Hawks two deadline acquisitions who were in suits for Games One and Two, Antoine Vermette and Andrew Desjardins, dressed for Game Three in place of Joakim Nordstrom and Teuvo Teravainen. And while one would hope it was the player Chicago mortgaged a first round pick to acquire was making an impact, it was Desjardins who had himself an afternoon.

Desjardins opened the scoring 14:48, but the Hawks only had the lead for 31 seconds before Mike Ribeiro brought the Preds back.

Jonathan Toews scored his second of the postseason only 36 seconds into second period, but once again the lead didn’t last a full minute. This time, Mattias Ekholm scored only 18 seconds after Toews’ tally to tie the game.

After the Ekholm goal, however, the Blackhawks took control of the game.

Brandon Saad scored his first of the series at 3:38 of the second, and this time the Blackhawks held onto the lead until the next goal was scored by Chicago. Brent Seabrook took a gorgeous pass from Jonathan Toews and extended the lead to 4-2 late in the middle period.

Scott Darling started in place of Corey Crawford, and was good even while allowing two goals in the game’s first 21 minutes. Nashville out-shot the Hawks 28-24 over the first two periods, but Darling was up to the task. He left more rebounds than he – or the fans – would like early in the second period, and could have played the two goals better, but kept the puck out of the net once his team took the lead for a third time.

Marian Hossa was flying from the opening faceoffs, and picked up the primary assist on the Blackhawks first two goals of the game. He now has four assists in three games, picking up two in each of Chicago’s wins thus far. With his goal and the assist on Seabrook’s goal, Toews now has five points in three games; he had three points in the Game One victory.

The teams skated 20 fairly quiet minutes down the stretch, and the game ended with Mike Ribeiro in the penalty box and the Hawks allowing their second power play of the afternoon to end without a goal. Chicago’s penalty kill was perfect against two Nashville advantages after struggling in the first two games of the series.

Pekka Rinne made 26 saves in the loss, playing behind a team that was without captain Shea Weber. In Weber’s absence, Nashville relied heavily on Roman Josi (28:32) and Seth Jones (26:11), but both defensemen finished the game minus-three.

Darling made 35 saves in the victory, earning his second career postseason victory.

Toews won 13 of 20 faceoffs against a Nashville team that was also missing Mike Fisher once again. Bryan Bickell led the Hawks with six hits, but only skated 17 shifts (13:34). Four Blackhawks led the way with three blocked shots, including Kimmo Timonen.