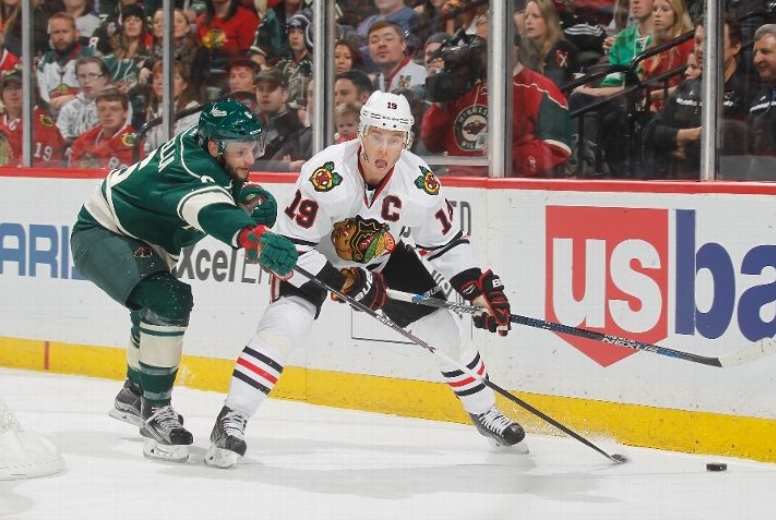 It took only 18 seconds for the Blackhawks to trail in Minnesota on Friday night. But, unlike the previous three games, the Hawks would score more than once on this night.

Chicago coach Joel Quenneville made a number of lineup changes after a third consecutive one-goal performance. Ryan Garbutt jumped onto the first line with Viktor Tikhonov getting scratched. Recently recalled Ryan Hartman joined Tanner Kero and Teuvo Teravainen on the third line. Bryan Bickell spent the night in the press box as well.

The Hawks scored twice in the first period, but both goals came on special teams. Jonathan Toews scored a short-handed goal 4:06 into the game to tie the score, and Brent Seabrook gave the Hawks the lead with a power play goal through a good Andrew Shaw screen at 10:33.

Unfortunately, the Wild would score twice in the final 5:08 of the opening period to take a 3-2 lead into the first intermission.

Just 77 seconds into the second period, Andrew Desjardins collided with Wild forward Justin Fontaine. After some deliberation, Desjardins received only a minor penalty for tripping; that appeared to be the correct call on the play. Fontaine required assistance to get off the ice and did not return to the game.

Later in the second period, Toews did the unthinkable: Chicago’s captain scored an even-strength goal.

It was Toews’ second of the night and fourth of the young season. Less than three minutes later, Artem Anisimov received a gorgeous stretch pass from rookie defenseman Erik Gustafsson and scored his fourth of the campaign to tie the game at four.

That pass was one highlight from a solid season debut from Gustafsson, who showed enough to effectively end David Rundblad’s time in Chicago. Rundblad was a scratch on Friday night, and with Michal Rozsival potentially returning soon the Hawks coaching staff will have a few decisions coming.

Hossa took his last shift of the night with 5:52 remaining in the second period, and did not return for the third period with a lower-body issue. Hossa skated only 8:05 in the game; he skated 18:14 in Winnipeg on Thursday night.

Nino Niederreiter scored his fourth of the season only 32 seconds into the third period to give Minnesota the lead. That goal held up for the final 19:28 and Minnesota dealt the Blackhawks their second divisional loss in as many nights.

Trevor van Riemsdyk led the Hawks with four blocked shots and finished with Niklas Hjalmarsson at the top of the ice time list for Chicago; both defensemen finished just under 25 minutes in the game. Trevor Daley skated more than 20 minutes, and Seabrook finished north of 22 minutes in the loss. Daley was the only Hawks skater credited with more than one hit (two) in the game.

Kero skated 12:05 with four shots on net and two blocked shots. Kero also won four of nine faceoffs and had one takeaway. He was impressive for a second straight night with his family in attendance.

The two recent call-ups had decent showings in their first NHL action of the season. Hartman skated 10:54 in his season debut and was credited with one blocked shots and two shots on goal in the game, but wasn’t credited with a single hit. Gustafsson skated 12:17 with one hit and one shot on net with the quality assist on Anisimov’s goal.

Toews won 17 of 29 at the dot, was credited with three of Chicago’s seven takeaways and scored twice.

Shaw was pointless once again, leaving him with only one point so far on the season. He had one hit and one shot on net in 13:19 but won only three of nine faceoffs.

The Hawks are back on the United Center ice when the Los Angeles Kings visit Chicago on Monday night.

45 thoughts on “2 From Toews Not Enough, Blackhawks Fall To Wild”