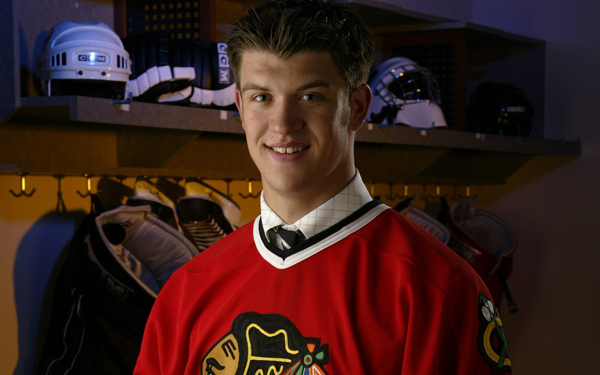 The 2003 NHL Draft is regarded by most analysts to be the best in league history. All-Stars, Olympic medalists, Stanley Cup champions and future Hall of Famers were all over that summer’s Draft, and the Blackhawks Cup victory on Monday night was impacted by the team’s top two picks. Chicago’s first selection in the 2003 Draft was the 14th overall pick. Consider for a moment the names that came off the board before the Blackhawks were on the clock:

Horton, of course, faced the Blackhawks in the Stanley Cup Final as a member of the Bruins. The Hawks also eliminated Suter with Minnesota and, with Los Angeles, Carter and Brown.

Three of the forwards taken in the top 13 picks have already reached 200 career NHL goals (Staal, Vanek and Carter), while Horton (198) and Brown (181) will likely reach the mark next year.

With that 14th overall selection, the Blackhawks selected Brent Seabrook out of the WHL. It wasn’t an easy decision, though; still available when the Blackhawks made their selection were fellow first round picks Zach Parise, Ryan Getzlaf, Mike Richards, Ryan Kesler and Corey Perry.

Seabrook, of course, has had a fantastic career with the Hawks so far. He has an Olympic gold medal and two Stanley Cup championships, and is one of the highest paid defensemen in the league.

However, the two selections made by Philadelphia in the first round of that year’s draft also impacted the Blackhawks’ Cup wins in both 2010 and 2013.

When the Flyers selected both Carter and Richards, they overloaded their system with depth at center. After winning the Calder Cup during the lockout, the Flyers decided to part ways with another center in their organization the following year.

Patrick Sharp was a victim of circumstances in Philly, but has will receive a second Cup ring later this summer.

Selecting Seabrook and trading for Sharp aren’t the only two significant pieces added to the Hawks during that incredible draft.

If the talent in the first round of that year’s class was impressive, the second round makes the class more amazing. Before the Blackhawks made their second selection in that draft, Dallas selected forward Loui Eriksson (33), Boston selected Patrice Bergeron (45), San Jose selected Matt Carle (47) and Nashville picked Shea Weber only three spots ahead of the Hawks at 49th overall.

With the 52nd overall selection, the Hawks picked goaltender Corey Crawford out of the QMJHL. In case you missed the last few weeks, Crawford just a completed magnificent postseason.

There were a number of other players that have impacted the two Chicago Cup runs selected in 2003. Philadelphia selected Colin Fraser with the first pick of the third round (69th overall), and Pittsburgh selected Daniel Carcillo with the 73rd overall pick.

In the seventh round in 2003, the Sharks picks Joe Pavelski at 205th overall, only a few picks before the Blackhawks selected another netminder, Mike Brodeur, at 211th overall. Three selections after Brodeur, Edmonton selected center Kyle Brodziak, who faced the Hawks as a key member of the Wild in the first round of this postseason.

While the NHL Draft is now limited to seven rounds, that wasn’t the case in 2003. In the middle of the eighth round, with the 245th overall selection, the Blackhawks selected defenseman Dustin Byfuglien.

Between now and the end of the week when the 2013 NHL Draft is completed, a lot will be said about the historic Class of 2003. It was an all-time great group of prospects, and the Blackhawks have benefitted from that year’s draft as much as any team in the league.