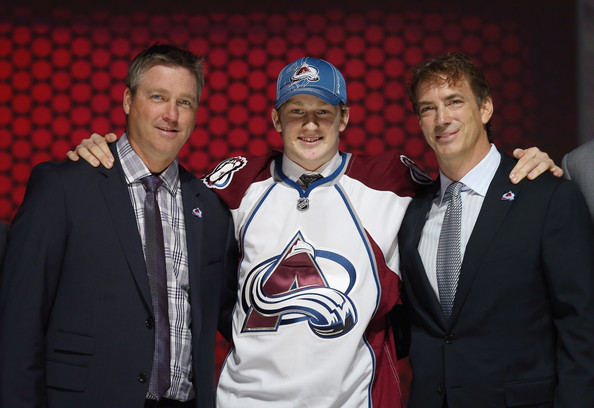 Now, let’s finish the circuit and travel to Denver. What will the underachieving Colorado Avalanche bring to the Central? Let’s take a look. Colorado got an early start on their summer after failing to make the playoffs again, and made plenty of noise early in the offseason. In late May, the team made a change on their bench that raised a few eyebrows. The Avs not only gave Hall of Fame goaltender Patrick Roy the title of head coach, but also named him Vice President of Hockey Operations.

Adding Roy to a front office that also includes Joe Sakic means there is plenty of championship experience in the organization for the young players to learn from, but one has to wonder if a few blowout losses will lead to the excitable Roy not hearing his players’ comments because his Cup rings are stuck in his ears.

An organization that has rarely opened its bank account since Sakic retired, the Avs actually made news by giving two of the cornerstones of their future long-term contracts this summer. Matt Duchene signed a five-year, $30M deal in mid-July, and then the Avs gave their 20-year-old captain, Gabriel Landeskog, a deal worth $39M over seven years.

The Avs made these financial commitments during a summer in which they held the top overall pick in the draft. And, even though many considered defenseman Seth Jones to be the top overall prospect and Colorado’s desperate need for an impact defenseman, the Avs opted to take another forward in Nathan MacKinnon.

MacKinnon, who doesn’t turn 18 until Sept. 1, was the best offensive player in the draft after posting 153 points in only 102 games over the last two seasons with Halifax of the QMJHL. He will push to join an interesting group of forwards this season. There were some nice performances from individuals last year, but the Avs once again failed to play consistently enough to get out of the cellar.

PA Parenteau was the team’s biggest free agent addition last summer, signing a four-year, $16M deal. He rewarded the team’s faith by leading the team with 18 goals and tying Duchene for the team high of 43 points. Parenteau, 30, also led the team with six powerplay goals.

Paul Stastny finished third on the team with 24 points, 19 fewer than Parenteau and Duchene. That enormous gap illustrates the issues the Avs had last year, and, when coupled with the extended hold-out of Ryan O’Reilly and injuries issues with Landeskog, have created concerns about the make-up of the team moving forward.

Also added to the forward lines this summer was Alex Tanguay, who was acquired with defenseman Cory Sarich from Calgary in a trade for David Jones and Shane O’Brien.

Prospects Michael Sgarbossa and Joey Hishon could battle for a roster spot this season as well. Sgarbossa saw action in six games with the Avs last season after scoring 19 goals in 57 games in the AHL. Hishon dominated the OHL last year, scoring 37 goals with 50 assists in 50 games with Owen Sound before moving on to the AHL.

The blue line in Colorado has been an issue for years, and the matter was compounded at the trade deadline in 2011 when the Avs made one of the worst trades of the last decade. While Kevin Shattenkirk and Chris Stewart are making an impact for the now-division-rival St. Louis Blues, former number one overall pick Erik Johnson posted four points in 31 games last year.

Certainly the addition of Sarich will (hopefully) help that issue, but the Avs will also look to free agent additions Nate Guenin, Nick Holden and Andre Benoit to do… anything. The reality that one (or more) of those three could see consistent minutes could be an issue for the Avs; they need Johnson and Ryan Wilson to come back with strong seasons, and more of what they saw from Barrie and Stefan Elliott last year.

Duncan Siemens, the 11th overall pick in the 2011 Draft, could also be in the mix for ice time on the blue line in Denver after registering 28 points in 57 games with Saskatoon in the WHL last year.

Between the pipes will be Semyon Varlamov and Jean-Sebastian Giguere again this year. In early April, Giguere ripped into his teammates in a postgame tirade. The 36-year-old actually had a better save percentage (.908) than Varlamov (.903), but the presence of prospects Sami Aittokallio and Calvin Pickard – and Roy behind the bench – will put pressure on the Avs netminders to perform as well on the ice as they did in the postgame interviews.