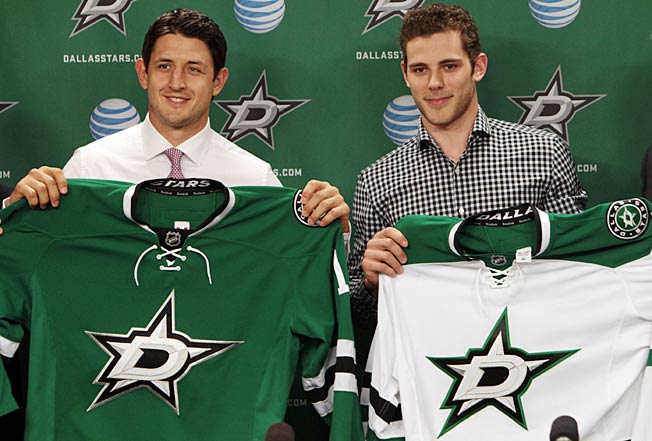 With the first preseason games now less than a month away, we’ve spent the last couple weeks looking at the teams the Blackhawks will face in the new Central Division. So far, we’ve looked at the Winnipeg Jets, St. Louis Blues, Nashville Predators and Minnesota Wild.

Today, let’s look at the team that was half of the biggest trade of the summer, the Dallas Stars. The Stars finished last year in 11th place in the Western Conference with 48 points (22-22-4). They were consistent, posting an identical 11-11-2 record at home and on the road. Unfortunately, they won only four of their last ten – including their last three games – and fell out of the playoff race.

On Jan. 24, Dallas agreed on a five-year deal with emerging star forward Jamie Benn. He rewarded their financial confidence by posting 33 points (12 goals, 21 assists) in 41 games.

The Stars issues were many last year, but keep the puck out of the net was their biggest problem. They finished 24th in the league, allowing 2.94 goals per game. Their penalty kill (81 percent) finished only 17th in the league as well.

Another significant area of concern at the end of the season was at the dot. Dallas finished 27th in the NHL in faceoffs, winning only 47.2 percent of their draws last season.

However, it’s hard to look back at the 2013 season and project to next season because of the significant changes made in Dallas. First year general manager Jim Nill came to Dallas after a long, respected run in Detroit, and immediately went to work turning over almost half of the Stars’ roster this summer.

Benn was one of four Stars to eclipse 25 points last year, but two of those players will be elsewhere this season. Dallas traded Jaromir Jagr to Boston at the deadline, but his 14 goals in only 34 games held up as the team’s regular season high.

Also departed from last year’s roster are Loui Eriksson (29 points) and Derek Roy (22 points). Eriksson was the centerpiece of the summer’s blockbuster trade that brought Tyler Seguin and Rich Peverley to Dallas. The Stars also added veteran center Shawn Horcoff and defenseman Sergei Gonchar in a dramatic overhaul that also included a new logo and new sweaters for the team.

Seguin might slide into the top line center role, and the additions of Peverley and Horcoff should help remedy the issues that plagued Dallas in faceoffs last year. Peverley won 63 percent of his draws in the playoffs for Boston, while Horcoff won 49 percent of 500 faceoffs in Edmonton during the regular season. At 24, Benn will lead a group of forwards that will include a few older veterans in Ray Whitney (41), Vern Fiddler (33) and Horcoff (35 when the season starts) but mostly a young talented group.

The addition of Seguin brings elite playmaking ability to the top of the Stars’ lineup. The 21-year-old scored 16 goals and added 16 assists in 48 regular season games for the Bruins last year, and added eight points (one goal, seven assists) in the playoffs.

Last year, Alex Chiasson and Cody Eakin combined to post 31 points in 55 games. Eakin, 22, registered 24 points in 48 contests while Chiasson, who turns 22 on Oct. 1, posted seven points in seven games. There are some that believe 18-year-old forward Valeri Nichushkin, the 10th overall pick at the 2013 NHL Draft, could make the roster in training camp as well.

The Stars will balance youth with experienced depth on their blue line as well. Brenden Dillon, 22, played in all 48 games last year and averaged 21:22 per night. Jamie Oleksiak, 20, could push for a spot on the Stars’ third pair as well after playing 16 games last year. Those two youngsters will join Gonchar, Alex Goligoski, Stephane Robidas and Trevor Daley in a deep group of defensemen.

Between the pipes this year for Dallas will be Kari Lehtonen and another free agent addition, Dan Ellis. Lehtonon turns 30 in mid-November, and needs to put together a full, healthy season for the Stars to make a playoff run. The next generation in net for Dallas is potential superstar Jack Campbell, the team’s first round pick in 2010, who will likely spend another year in the AHL.