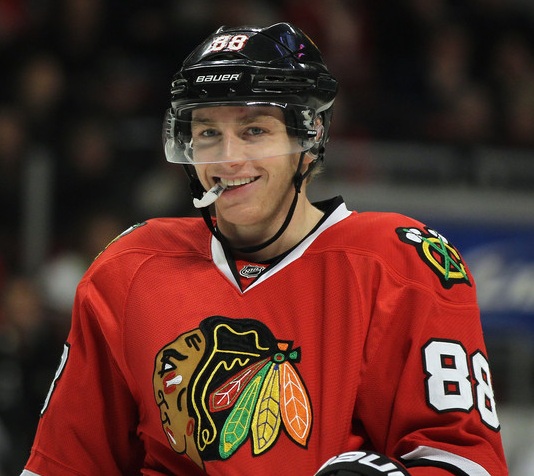 On Tuesday we kicked off our series looking at the potential of Blackhawks players bringing home hardware at the 2013 NHL Awards. In the first installment, we made the case for Jonathan Toews to win the Frank J. Selke Trophy as the league’s best defensive forward. The Lady Byng Memorial Trophy is annually given to the player adjudged to have exhibited the best type of sportsmanship and gentlemanly conduct combined with a high standard of playing ability. The winner is selected in a poll of the Professional Hockey Writers’ Association at the end of the regular season.

The first candidate for the Lady Byng on our list would be Ryan Callahan of the New York Rangers. Among all NHL forwards, Callahan ranks fifth in average ice time per game (21:22), and his 137 hits rank 10th. As the captain of the Rangers, he has been a respected leader and plays a physical game the right way.

Our second candidate would be Detroit’s Pavel Datsyuk. As we mentioned when discussing the Selke, as long as he’s playing it’s hard to imagine Datsyuk wouldn’t be considered for this award. He is averaging 20:06 on the ice this year, and has accumulated only 14 penalty minutes to date.

This year, there’s one player on the Blackhawks that should have a fantastic chance to win the award: Patrick Kane.

Kane has had a magnificent season, showing a maturity that many had written off in recent seasons. Through Monday night’s win, Kane has been called for only six penalty minutes all season while averaging 20:08 on ice per game. Only 23 forwards in the NHL are averaging more than 20 minutes per game this year, and only three of the other 22 have less than 10 PIM to date. Only Toronto’s Tyler Bozak and Kane are averaging over 20 minutes per game with only six penalty minutes to date. Kane being a point-per-game player while skating a heavy workload every night and maintaining low penalty minutes fits the profile of St. Louis and Datsyuk over the last decade. However, where Kane may gain momentum in the voting this year may be in the defensive zone; his work has noticeably improved, and Kane is now 13th among all forwards with 35 takeaways.

Our vote would put Callahan as the runner-up and, as was the case with the Selke, Datsyuk in third.