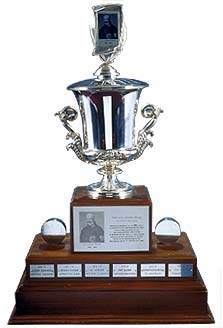 This week, we’ve made the case for a number of Blackhawks to win major NHL awards after this season. We discussed the credentials of Jonathan Toews for Selke, Patrick Kane for Lady Byng and Brandon Saad for Calder.

Now, let’s look at whether or not Joel Quenneville has a chance at the Jack Adams. The Jack Adams Award is annually given to the league’s Coach of the Year as voted by the National Hockey League Broadcasters’ Association at the end of the regular season.

Quenneville has won the Jack Adams once before in his career. After leading the St. Louis Blues to the Presidents Trophy in the 1999-2000 season, a year in which the Blues posted 114 points in the regular season and won the Central Division; the Hawks finished third in the division that year with 78 points in 82 games.

This year, the Quenneville-led Blackhawks have a chance to equal (and even pass) the total points put up by that Chicago squad; they have 70 points through 42 games entering Friday night’s game. And, like the St. Louis team Quenneville led that season, these Blackhawks will be the top seed in the Western Conference when the postseason begins.

But is Quenneville a lock for the award? Here are our candidates

The first candidate on every ballot should be Paul MacLean in Ottawa, and not only because he shares Quenneville’s affinity for facial hair. When you consider the injuries he has been forced to deal with this year, the Sens being in playoff contention is incredible; Jason Spezza, Milan Michalek and Erik Karlsson have played 37 total games combined.

Our second candidate is Todd Richards in Columbus. While MacLean has been forced to deal with injuries, Richards took over a perennial last place team that had just traded away their captain and has them on the cusp of qualifying for the playoffs. Certainly the players brought in from the Rangers in the Rick Nash trade have added quality depth to the Jackets roster, but the Jackets being ahead of the Red Wings in the standings with less than 10 days left in the regular season is unthinkable.

While Quenneville certainly deserves some consideration for the Jack Adams, he may not even make the final three candidates.

The Pittsburgh Penguins are pushing the Hawks for the top record in the league, and they have done it while dealing with a number of significant injuries (Sidney Crosby, Kris Letang, Evgeni Malkin and Marc Andre Fleury to name a few). Dan Bylsma could easily make the top three.

Two other names that should be on every short list are Jack Capuano and Adam Oates. Oates has quietly pushed the Washington Capitals back to the top of the Southeast Division this year, while Capuano’s Islanders may qualify for the playoffs for the first time since the 2006-07 season. It’s hard to look past the best record in the league, and all of the special things the Blackhawks have done this year. But it’s just as hard to make a case that Quenneville has been the best coach in the league this year.

Certainly missing Marian Hossa and Patrick Sharp for some time has forced Quenneville to mix up his lineup (not that he needs an excuse to do that), but the injuries dealt with in other cities this year, and the emergence of the Islanders and Blue Jackets as playoff teams after spending most of the last decade as losers, make the field for the Jack Adams a crowded one.

What MacLean has done without arguably his best three players this year has been remarkable. A lot of credit should be given to the scouts and front office in Ottawa for giving him some fantastic rookies to help fill the enormous gaps left by injured superstars, but it’s been MacLean calling the shots on the ice.

Our second finalist for the Jack Adams Award this season would be Capuano in New York. The third would be determined by the final week of the regular season. Richards would get the nod if Columbus makes the playoffs; if not, we would give the third spot to Pittsburgh’s Bylsma.