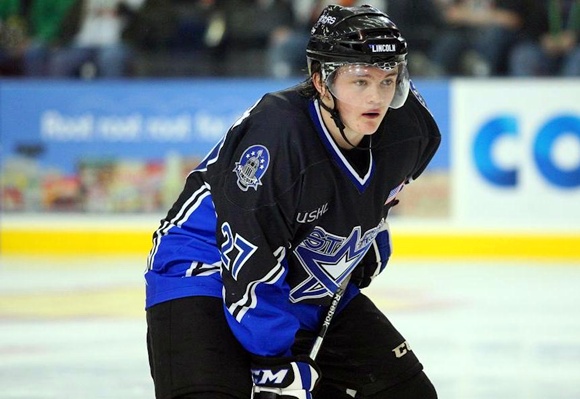 The Blackhawks made the following picks in rounds 5-7 during the 2013 NHL Draft:

Round 5 – Pick 134 – Luke Johnson, F
5-11, 180
USHL
Johnson is headed to North Dakota this fall after playing for Lincoln in the USHL.
From Blackhawks.com: “A gold-medal winner with Team USA at the World Junior-A Challenge, Johnson ranked sixth on Lincoln with 46 points (19G, 27A) in 57 regular-season games, leading the team with nine power-play tallies. A Grand Forks, N.D., native, Johnson will play for the University of North Dakota in the fall, where his coaches expect him to play third-line center and contribute in all situations.”

Round 6 – Pick 181 – Anthony Louis, F
5-7, 155
USHL
Louis is headed to Miami (Ohio) this fall.
From Hockey Prospectus: “Louis is a talented forward who has a high level of puck possession ability, and he has been a top player with the USNTDP over the past two seasons. The primary reason for this low ranking is his size, and it might cause him to freefall beyond this spot on draft day. He is small, at about 5’6″-5’7″, but his skill may be worth the gamble. One scout mentioned Calgary prospect Johnny Gaudreau as a point of reference, saying that small players with talent can be worth it if given the time to develop. Louis has the elements expected from a talented forward: high-end puck skills, great creativity, superb on-ice vision, and good speed. He is also a tough player who will initiate contact, fight it out in board battles, and backcheck hard. He finds ways to stand out on a nightly basis despite his limited stature. He will attend Miami University in the fall.”

Round 7 – Pick 211 – Robin Press, D
6-2, 187
Sweden
From Blackhawks.com: “Chicago’s final selection in the 2013 draft is a classic project pick: a right-handed shot who converted from forward to defenseman just a year ago, after joining Sodertalje in the second-tier league. Press is still learning the blue line, putting up a respectable 20 points (9G, 11A) last season, and if he continues to progress, he could have an outside chance of making Sweden’s World Junior squad this winter.