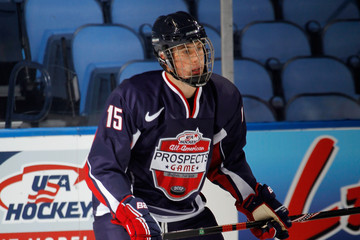 During the fourth round of the 2013 NHL Draft, the Stanley Cup champion Chicago Blackhawks traded up to take defenseman Robin Norell with the 111th overall selection and then selected center Tyler Motte with the 121st overall selection.

Norell, listed at 5-10 and 176 pounds, 10 goals and seven assists in 30 games in Sweden last year. He’s a left-handed shot. Here’s what they had to say about Norell on the Hawks’ site:

Chicago’s second pick from Sweden does all the little things to succeed on the blue line, playing a Johnny Oduya type of game: mobile, hardworking and willing to sacrifice the body.

“High, high character—he’ll do whatever it takes to get to the next level,” Blomgren said. “He’ll be a big possibility for Sweden’s U20 team with the chance to make the World Juniors.”

Next season will ideally be more of the same, with Norell aiming for ice time at the senior club level for Djurgarden.

Motte, listed at 5-10 and 175 pounds, scored 21 goals and added 16 assists in 57 games in the USHL. He is headed to the University of Michigan this fall. The Blackhawks’ site cited a few scouting reports on their draft picks. Here’s what they had to say about Motte:

Hockey Prospectus: “Motte entered this season as a top prospect, and though he did not have an outstanding year, he showed that he could still contribute in a number of ways. He is a very good skater who picks up speed quickly, and he plays with a high level of energy. Even though he is a smaller player at 5’9″, he pressures well with his speed. Motte anticipates the play very well off of the puck for a player his age, and he was one of the USNTDP’s best penalty killers. While he is not dynamic offensively, he shows significant flashes of upside with his puck handling and playmaking. Motte has good hand-eye coordination, and his overall hockey sense allows him to be a good puck possession forward. He is committed to the University of Michigan for the 2013-14 season.”

TheScoutingReport.org: “Motte is a 5-foot-10 winger who is arguably the top goal scorer on the U.S. U18 team this year. Motte will attend Michigan this fall while no doubt receiving interest from Sarnia, who hold’s his OHL rights. Speaking of Sarnia, he might just remind you of OHL leading scorer Reid Boucher. A true scorer, Motte loves to shoot the puck and has a rare goal scoring instinct.”

The smooth-skating Motte, who will play for the University of Michigan next season, showed his high-end defensive game as one of the USNTDP’s best penalty killers at the U18 World Championship. Despite a smaller frame, his energy and hockey sense are his best attributes, and he led the national development team in scoring over the last two years.

“He’s a bit of a bull,” Amateur Scout Mike Doneghey said. “He’s scored at every level, but he brings an intensity that’s second to nobody. He’s a guy who is probably going to have more bruises and ice packs on him than points in a game. He’s a really good utility player who can play a lot of roles.”