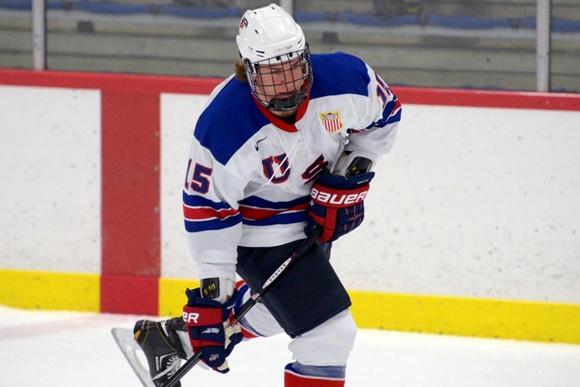 He is headed to play at Yale this fall, and scored two points (one goal, one assist) to help Team USA capture a silver medal at the 2013 Under-18 World Championship. He also won silver with Team USA at the 2012 Under-17 World Hockey Challenge.

The Blackhawks’ site cited a few scouting reports on their draft picks. Here’s what they had to say about Hayden:

Red Line Report: “Big bull likes the physical aspect of the game. Hits hard along the walls and drives through his checks. Dominates down low in the offensive corners, winning the 1-on-1 puck battles and making power moves to the crease. Has soft hands for such a horse, and uses his [size] effectively to gain and hold position around the slot, keeping defenders off his back. Also uses big body and long reach to protect the puck when cycling. But he is playing a bit too heavy and it’s affecting his skating, which was never his strong suit. Lacks both first step burst and a top-end gear. Feet are very heavy and he does not stop/start quickly. He is tough to move off the puck and uses twists/spins in tight areas to gain separation. Provides good puck support and has good hockey sense in all three zones. Understands defensive zone positioning and sells out his body to clear zone along the boards.”

Hockey Prospectus: “Hayden is a power forward who drew attention this year due to the solid amount of offensive skill he displayed, along with his power elements. He already has the body of an NHLer, as he is 6’2″ and 210 pounds, and he uses his frame well. He is a tough player who will drive the net, shoulder off checks, and grind it out for pucks in board battles. His offensive touch with the puck is intriguing. Hayden will not blow anyone away with a flashy move or highlight reel pass, but he can flash above-average potential, and he has some creativity to his game. He is not selfish, as he can make plays. His power elements, combined with the fact that he can make a man miss, make him a desirable prospect. His skating is roughly average; while he is not lumbering, he is not a player will blow past a defenseman. One scout thinks that he is average skater, and another thinks he needs some work in that area. He will be attending Yale University in the fall.”

TheScoutingReport.org: “Stocky Yale commit brings an intriguing combination of size and skill. Excellent cycle based forward who keeps his feet moving and is difficult for the opposition to contain due to his large stature. At his best below the hashmarks, Hayden is willing to stand in front of the net and sacrifice his body in a physically punishing scoring area. Skating needs to improve for him to make an impact at the pro level. We see Hayden having a real chance one day as his competitiveness should allow him to play a number of different roles.”

Also from the Hawks’ site:

Big man with an offensive streak recovered from early-season shoulder surgery to put up 31 points (16G, 15A) in 51 total games for the USNTDP this season. The Connecticut native will join reigning NCAA champs Yale this fall.

“Big power forward, strong, with a lot of character,” said Amateur Scout Mike Doneghey. “His skating still needs to come a little bit, but it’s not that far off. He’s a big player that we could use on the wings, and he can create space for a lot of the skill guys.”