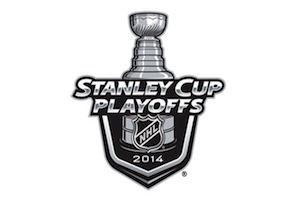 On Wednesday night, the NHL playoffs began with a bang. Defense and goaltending were optional, as all three games were high-scoring affairs. Here’s the scoreboard from the opening night of the 2014 Stanley Cup Playoffs:

As you may have seen since the beginning of the calendar year, the NHL has a new corporate sponsor that is integrating its branding throughout the postseason.

BRP, makers of the Can-Am Spyder, served as an official sponsor of the 2014 NHL Stadium Series held in Los Angeles, New York and Chicago and the 2014 NHL Heritage Classic in Vancouver.

As part of the relationship between BRP and the NHL, six-time Stanley Cup champion Mark Messier has signed-on to promote the unique Can-Am Spyder three-wheeled on-road vehicle to the lives of sports, lifestyle and adventure-seeking consumers.

Messier stars in a video vignette that highlights his winning “guarantee” 20 years ago, when his New York Rangers faced elimination in Game 6 of the Eastern Conference Final. This video presents a new spin on how Messier’s life changed after he guaranteed the win, and can be viewed online at GuaranteedByMessier.com.

Find out more about Can-Am Spyder on Facebook at facebook.com/CanAmSpyder and on Twitter at twitter.com/officialspyder. To find a local retailer, visit the Can-Am Spyder dealer locator.