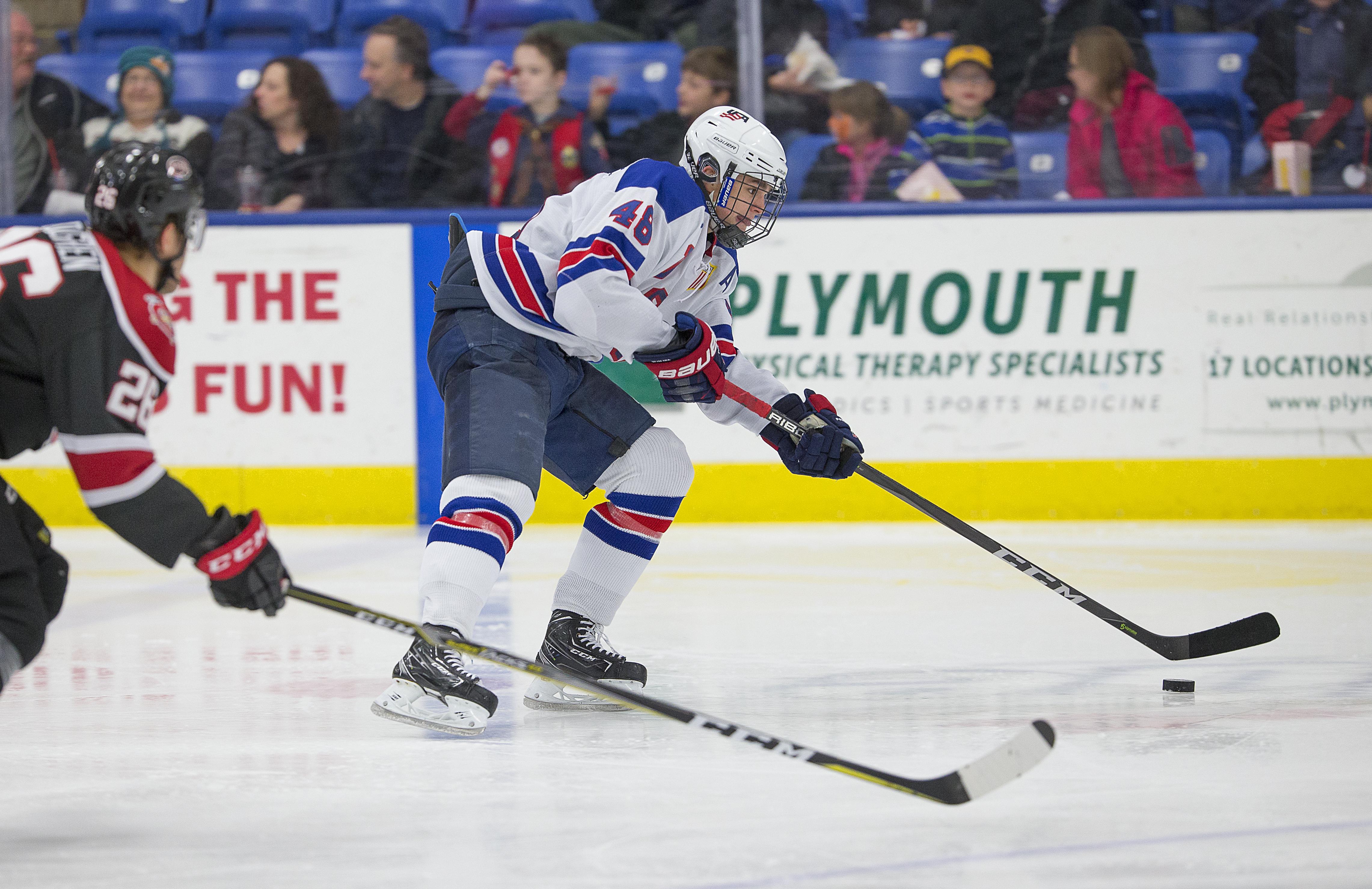 In our fourth prospect profile in advance of the 2019 NHL Draft, we move on to another center. Thus far we have profiled:

After missing several months to begin his draft-eligible campaign, Turcotte is back healthy and producing at a high rate. Turcotte posted near-historic numbers with the U17 team a season ago before transitioning to the U18 team down the stretch. The Wisconsin commit blends exceptional defensive play with high-end speed and skill. Has played second fiddle to Jack Hughes for years, but is beginning to step out of his shadow. A coaches dream. Cam Robinson

Powerful center with excellent playmaking abilities and game-changing speed who has the potential to become a top-line pivot in the NHL. Turcotte, who’s father Alfie was a first-round pick of the Montreal Canadiens in 1983, was a key contributor for both the NTDP’s under-17 and under-18 programs, including a midseason promotion to the latter where he produced 16 points in 19 games in a limited role. Turcotte is a low-maintenance center in that he can excel in both optimal and non-optimal conditions, plus handle physicality better than most offensive forwards. He is a fast, agile skater with a wide, powerful stride and the balance of a seasoned NHL power forward. Getting knocked off the puck while he’s either static or moving is something you rarely see.

Turcotte possesses superior vision and passing ability, and it’s clear from his first shift that he understands the game’s intricacies and nuances that require a center to develop chemistry with his linemates. He plays smart hockey with his head on a swivel and attacks with decisiveness, maintaining situational awareness no matter how fast he’s motoring up ice. Turcotte is one of the few draft-eligible forwards who can time his passes with precision while moving as fast as he can. Although he seems to like to defer to the pass, Turcotte owns a hard, accurate wrist shot with a quick release, and he’s proven to snap off high-velocity shots within tight windows.

Turcotte is an excellent skater. He has a long and powerful stride that makes it very difficult to knock him off the puck. Turcotte is exceptionally quick, he has a very good first step and excellent acceleration. His top-end speed is also very good and just a notch below being great. Once he gets a step on a defender, he can take the puck to the net. That may even improve as he continues to recover from the lower body injury that plagued him early in the season. On top of all that is the fact that Turcotte has a non-stop motor. He is always moving his feet, which keeps him one step ahead of his opponents.

Turcotte controls the play down low, extending the possession and waiting for teammates to get open. When there is an opportunity, he can make a tough pass through tight spaces. Turcotte also has an excellent wrist shot and a quick release. His snapshot and slap shot are also very good. Turcotte has the soft hands to score goals in tight to the net. He is not afraid to take the punishment in front of the net and has the hand-eye coordination to get tip-ins and pounce on rebounds.

Alex Turcotte is relentless in his play, forechecking hard and causing turnovers in the offensive zone. He is a real thorn in the side of opponents. He also has plenty of skill, with his ability to control the puck and make plays while skating at top speed a real asset to his game. Turcotte could use some improvement making quick moves and changing the angles to open up passing lanes and find open teammates. He is a smart player who reads the play well and keeps the puck moving effectively but often is forced into taking a safe pass instead of creating a great scoring chance.

Alex Turcotte is excellent in the defensive zone. He reads the play well and keeps himself between his man and the front of the net. Turcotte uses an active stick to poke check opponents as well as to intercept passes. He is extremely effective on the penalty kill. He quickly transitions turnovers to offence. Turcotte is not a big hitter, but he is not afraid to take a hit to make a play. He is also relentless in getting after the puck and getting in the mix in the dirty areas of the ice. Despite the lack of really big hits, he is always in the face of his opponents.

Turcotte’s non-stop motor and offensive skills make him a prospect who can play in any situation and fill any role. He may need some time before he is NHL ready but will get plenty of time to bulk up while playing in the NCAA. With a few small improvements, Turcotte could become a number one centre in time. Even if he never reaches that ceiling and becomes an effective two-way second line centre, he will still be a coach’s favourite due to his defensive game and relentless energy. His game is reminiscent of Ryan O’Reilly, but this is a style comparison and not one based on skill or ability.