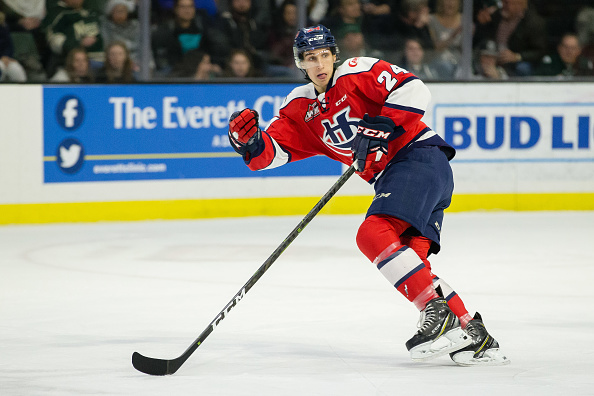 The Blackhawks now own the third overall pick in the 2019 NHL Draft. Over the coming weeks we’ll look ahead at some of the prospects they will consider with their selection.

The first player we’ll look at is Dylan Cozens.

The reigning WHL Rookie of the year was looking to build off a terrific U18 Hlinka performance. He jumped out to a blistering start with Lethbridge in year two by putting up 10 points in his first four games. Since that time though, he’s produced 12 points in 13 contests. Those numbers are fine but not top-of-the-class quality. Cozens remains a top-end prospect and will battle all season long for the right to be the second centre off of the board behind Jack Hughes. The Yukon-native brings good size, speed, awareness and a complete offensive toolkit. He’s a budding fantasy asset that poolies should be well aware of.

A high-octane power forward who can play both center and wing, Cozens is the reigning WHL Rookie of the Year after leading all freshman with 22 goals and finishing second in points with 53. He combines all aspects of skating — quickness, acceleration, balance and agility — into one dynamic package that allows him to dictate things rather than play reactionary. Cozens is a capable stickhandler who can control the puck at high speeds before making proper decisions more times than not, and he’s very good at setting up give-and-go’s that position him for one-timers or tap-ins. He owns an excellent shot, both for its velocity and accuracy, plus he can score on his backhand from in close.

Cozens is very physical and always finishes his checks; at times to a fault, as his desire to mash people into the boards can make him the last forward back on an opposing counterattack. He’s quick enough, however, to eventually catch up and place himself in the right position to ensure there aren’t gaps in coverage. Cozens always keeps his feet moving and keeps his stick active, and his quick turns and pivots allow him to stay with his man, especially while he’s killing penalties. Overall, he’s an excellent 200-foot forward who is very good on draws, can anchor a penalty-killing unit, run a power play and assume top-line duties.

Cozens is a very good skater, especially given his size. His first step is well above average and his acceleration is very good. He also has very good top-end speed. He is able to keep up with the play and this allows him to play a 200-foot game. Cozens agility and edgework are outstanding. He is able to make quick cuts and change directions quickly. This makes him especially difficult to defend off the rush. Cozens balance and power is good at the junior level. It will only get better as he continues to add muscle to his frame. This allows him to be effective controlling the puck down low.

Cozens is a pure goal scorer. He has an excellent wrist shot and a quick release as well as the soft hands to finish in close. Cozens also has a good snapshot and slap shot. He is not afraid to get to the dirty areas of the ice, establishing position at the top of the slot, where he can fire in one-timers or provide the “high-screen” that many teams are using to great effect in recent years. With the puck on his stick, he is not afraid to take it to the front of the net.

Dylan Cozens also sees the ice very well. He controls the puck in the cycle game before dishing to an open teammate. His hockey IQ is excellent, as he anticipates where his teammates are headed and is able to set them up for good scoring chances. He can control the puck and has the patience to slow down the play and the instinct to speed it up in order to create openings depending on the situation. His vision and skill allow him to quarterback the power play on the half boards. Without the puck, Cozens finds soft spots in the defence and gets himself open to make a play. He is also effective at battling for loose pucks in the corners and along the boards.

Cozens will need to add muscle to what is currently a lanky frame. This will help him to be more physical on the forecheck, as well as to better support his defence down low. Cozens is willing to play a physical game and not afraid to throw his weight around in all three zones. He works hard in his own end, and he tends to be in the right position and make the right reads. His positioning and smarts are outstanding though. He is already a very smart defensive player and a good penalty killer. His ability to anticipate plays, as well as his quick stick, create turnovers. Once a turnover is created, he can transition the puck up the ice quickly.

Cozens may never challenge for a scoring title, but he will still be able to score enough to be a first line centre. Add in his strong defensive game, and the potential to grow into a Selke calibre centre and he could be a franchise-changing force up the middle. While he has also played the wing in junior (mainly his rookie year), his skating, vision and hockey IQ all suggest his future is at centre. In terms of playing style, he is reminiscent of Ryan Kesler, though this is not a skill-level comparison.