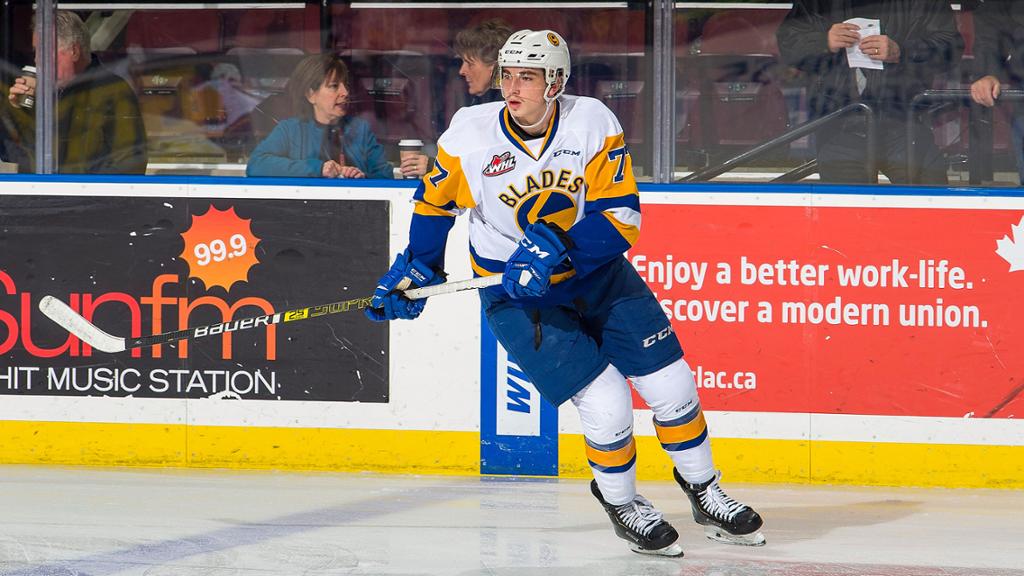 We continue our previews of potential Blackhawks’ picks in the 2019 NHL Draft. We discussed Dylan Cozens and Vasili Podkolzin.

The towering centre is making good on the investment that Saskatoon made when they selected him second overall in 2016 WHL Bantam draft. He leads his team, and all-draft-eligible WHL players in scoring with 11 goals and 34 points in 21 contests. Dach loves to create offense off the half-wall on the power play and slows things down at even-strength to weigh his options. He owns slick hands, a heavy release and great vision.

Dach led all WHL rookies in assists last season with 39 and has a Hlinka gold medal somewhere in his parents home. A cerebral pivot with a massive upside, Dach won’t be waiting long to hear his name called at the draft next June. Cam Robinson

Big-bodied playmaking center with outstanding passing skills and soft hands who is one of the best draft-eligible players at incorporating all his teammates into the attack. Dach has a tremendous wingspan and reach that help him maintain control the puck for lengthy periods inside the offensive zone. He is a confident puck carrier up ice, and you’ll rarely see him advance via direct routes. Dach can create time and space using a variety of methods on zone entries, and he can stutter-step defenders out of position. All these traits force opponents to back away from him, which provides him with the opportunity to unleash a wicked wrist shot. Still, Dach certainly is more of a set-up man than a shooter, and you can make a strong argument that he is the best saucer-passer of any forward prospect.

Dach has elusiveness for a big man, and his agility in tight spaces allows him to outmaneuver pesky opponents. His straight-line speed is average but deceptive, and his skating style and stride appears a bit choppy and short. Nonetheless, Dach has no problem inserting himself into a rush or initiating one himself, and you can count on him to create several odd-man chances each game. He can run a power play from the half wall and has confidence in his passes from either forehand or backhand, and he can sense when the time is right to make a decisive pay during a stagnant possession. Defensively, Dach will pressure the points, and he relies on his long stick to break up plays. He is, however, neither physical nor consistent on draws. Dach will drop down to support his defensemen, but he’ll dig for loose pucks rather than use his strength to knock it free.

Dach is an impressive skater for his size but will never be known as a burner. He has good top-end speed but his first few steps and his acceleration can use some improvement. He also has very good agility and edgework for his size, allowing him to weave in and out of traffic. His stride is long and powerful and he is very tough to knock off the puck. Dach has excellent balance and this should only improve as he continues to add muscle to his frame going forward. This allows him to fight through checks, control the puck down low, and win battles along the boards.

At 6-foot-4 Dach has the size to be a powerful centre. Dach takes the puck to the net and is more likely to go through a defender than to try and make a deke to get around him. He is very tough to contain on the cycle, as he protects the puck well and this allows him to extend plays down low and wait for a teammate to get open or for an opposing defender to get out of position. Dach has very good vision and passing skills. He finds open teammates and sets them up for scoring chances in tight.

Dach also has a decent wrist shot and release. This season he started using that shot more and it is leading to goals and opening up defences, making his playmaking skill even more deadly. While he is still a pass first player, the improved willingness to shoot has made a difference in his game. He is very intelligent and reads the play very well. Dach almost always makes the right play with the puck on his stick. This allows him to be the main focal point of the power play, controlling the play on the boards and setting up teammates for scoring chances.

Dach is also willing to use his body in his own end of the ice. He supports the defence with effective back pressure and works to win battles along the boards and keep the front of the net clear. While he is not a big hitter, he is willing to use his size to his advantage, leaning on opponents to win battles, and using his long reach and active stick to cut down passing lanes. He can be used in all situations, including going against the other team’s best players and killing penalties. Dach is strong in the faceoff circle as well.

Dach is close to being NHL ready but might be best off with one more year of junior hockey. There are some improvements that can still be made in terms of adding muscle to his frame, cleaning up his first step and acceleration, and continuing to have confidence in his shot. Those flaws are minor though and should easily be fixed as he matures. Dach could grow to become a top-line NHL centre. His game is reminiscent of Ryan Getzlaf but this is a style comparison only and not one based on talent.