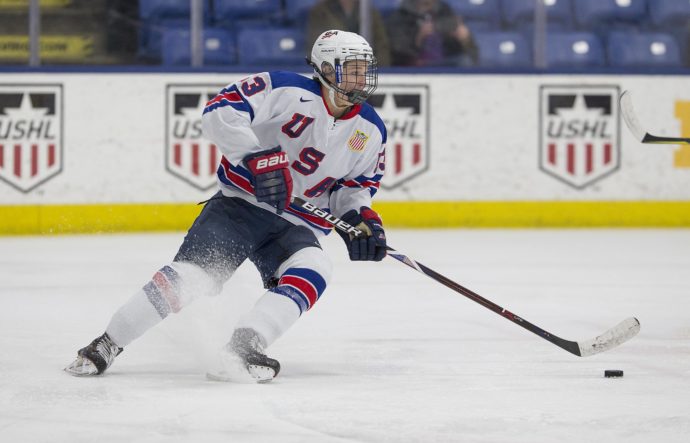 In our fifth draft prospect profile, we stay at the forward position. To date we have profiled:

Trevor Zegras is an elite two-way forward that can play both wing and center. His pro-level mobility is the foundation of his game, supplementing an in-transition speed that shifts the pace of play. He knows how to get under the skin of opponents and will actively seek out opportunities to lay the body and create separation, all the while staying attentive to the unfolding play. This unique aspect of his game makes him difficult and frustrating to play against. His ability to finish and create plays is undoubtedly the hallmark of his game, as he is one of the major dynamos of his draft class. He is a dangerous scoring threat anywhere below the blue line and his vision matched with his net-drive propels him into positions that create high percentage opportunities. Defensively astute and proactive, he sees the lanes that his opponents do and will do his best to force the puck along the wall where he is at his best. All-in-all, Zegras is one of those special buzzsaw-type players that can excel in key roles and perform under pressure. (Curtis Joe, EP 2019)

Zegras is a creative player with exciting puck skills. He blends good speed with unique lines to cause separation through the neutral zone and distribute effectively to his mates. Playing behind Jack Hughes for the last two seasons has muffled his hype, but he’s been dynamite as the 2C with The Program. His patience with the puck allows his vision to take over. Has been at his best while playing against NCAA competition and on the international stage. Possesses all the ingredients for a productive top-six future. Cam Robinson

Slick playmaking center with exceptional hockey sense who took over the under-17 NTDP’s top line after Jack Hughes and Alex Turcotte were promoted. Zegras, who is committed to Boston University, is very dangerous with the puck and appears quite comfortable handling the responsibilities inherent in leading a talented squad’s offense. He is both crafty and fancy with the puck, and his passes almost always are on the tape with authority. Zegras’s pass accuracy remains consistent anywhere on the ice and he’s just as dangerous threading the needle while manning the half wall as he is in open ice. His ability to stickhandle while keeping his head up allows him to be the first to identify trailers or back-door cutters, and Zegras will use no-look centering passes on the power play to exploit an open passing lane. He’s also capable of tricking goalies with a hard, accurate shot that he can tuck under the bar from bad angles.

Zegras plays engaged with or without the puck and stays in motion in all three zones. He locks in on the puck regardless of where it is or whether or not he’s in control. Once he’s corralled it, Zegras can use a variety of stutter steps, gear changes or pirouettes to motor past or through traffic. His agility is outstanding, and he always seems to make the right reads when anticipating puck travel. Zegras is a strong skater with very good straight-line speed who can stay low to the ice and maintain his balance as he zips through the neutral zone into opposing territory. His zone entries are clean and designed to create time and space while maintaining possession. He is very good on faceoffs and will play physical along the boards.

Zegras is a very good skater. His speed is very good. However, it is his first step quickness and acceleration that set him apart. He can use his ability to change speeds to elude defenders and beat them in one-on-one situations. Once he gets a step on a defender he can accelerate to the net. His agility and edgework are elite. Zegras can change directions on a dime and make quick cuts. He has decent balance and can fight through checks at the junior level but needs to get stronger to be able to work down low at the pro level.

Zegras marries his skating ability with the ability to handle the puck and make plays at top speed. He has very good vision and passing skill, helping him to be a primary playmaker on his line. He also has a high hockey IQ and good vision. Zegras anticipates the movements of his teammates and opponents, allowing him to find the open man and create quality scoring chances. He can make tape-to-tape passes through tight areas as well as make a saucer pass to a teammate. Zegras is especially effective on the power play, where he can run the play off the half-boards.

While best known as a playmaker, he can score goals with soft hands in tight to the net. Zegras has good hand-eye coordination and can tip in shots and pounce on rebounds. His wrist shot has decent strength and is very accurate. He has a quick release and can fool goaltenders. Zegras could use some more muscle on his slap shot. Zegras plays a bit of a perimeter game in the offensive zone though. He could stand to get more involved in the dirty areas of the ice.

Zegras works hard in his own end of the ice. He backchecks hard and supports the defence down low. He uses his quickness and an active stick to create turnovers. Once the puck does change possession, he transitions quickly to offence. Zegras has good positioning and seems to always be on the right side of the puck. He is also good in the face-off circle. Zegras isn’t the biggest hitter but is willing to get involved in puck battles and board work in his own end. He also uses his smarts, positioning, and anticipation to be effective in his own end of the rink.

Zegras has the potential to be an effective two-way forward in the NHL. He will need some time to develop though. Heading to the NCAA will give him the time to bulk up and get stronger before heading to the pro game. If a team is willing to be patient, they could end up with a very effective player. While he projects as a centre, he has spent time on the wing as well. Zegras’ game is reminiscent of Evgeny Kuznetsov. This is a stylistic comparison though, not one based on talent level.