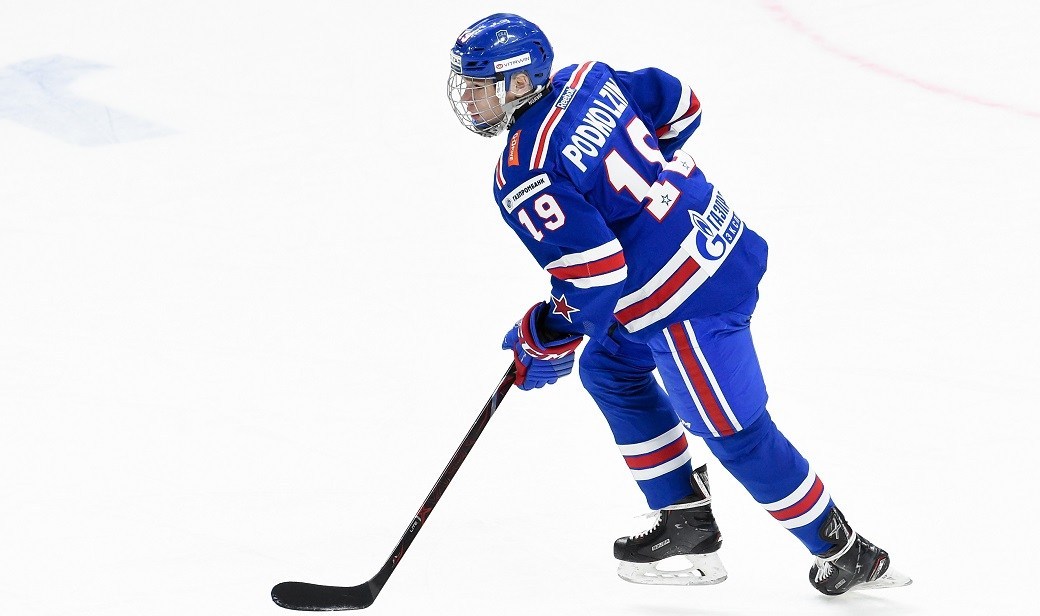 As we look ahead to the Chicago Blackhawks making the third overall selection in the 2019 NHL Draft, we continue our profile series of the players who might be on the Hawks’ board. We previously looked at Dylan Cozens.

Podkolzin started his draft season with a great performance at the Hlinka-Gretzky Cup where he scored eight goals and three assists in just five games. He was also the team captain in that tournament. Podkolzin has all the offensive tools needed to become an elite level player. He has great top speed and he can make plays at high speed. He’s capable of making quick turns. His shot is amazing but he also has the vision and passing skills to be a good playmaker. His one-on-one skills are great as well. On top of all that, he has good size (6-1, 190) and he isn’t afraid to use it. He can power his way to the net at the junior level, and when he adds more muscle to his frame, he can do that at the pro level as well. The Russian factor may cause Podkolzin to drop in the NHL Entry Draft and you may need to wait a couple of years while he develops in Russia but his offensive upside is one of the highest in this draft class. Jokke Nevalainen

A rugged three-zone winger with an incredible compete level that compliments his superior puck skills, Podkolzin has been a top-six fixture for Team Russia at several high-profile international events. This is his first year playing in the MHL — Russia’s premier junior circuit — and he is an early-season favorite to be named one of the league’s top rookies. Podkolzin checks all the intangible blocks, as he can be counted on to address a variety of his coach’s concerns. What separates him from all the other “toolsy” forwards is that he can either create or finish plays while traveling at maximum speed, and his strong balance and stickhandling seems to convince defenders to back off more than they should. Podkolzin is effective both in open ice and during trench warfare, and he’s capable of completing on-the-tape passes that lead directly to quality chances near the net.

Podkolzin can be used to anchor the lead penalty-killing unit or run the power play from the half wall. He is confident with the puck and shows a tremendous amount of poise while controlling it. He’s quite coordinated and has soft hands to handle tough passes, plus Podkolzin hits the net with the majority of his one-time attempts. Without the puck, he’s a crash-and-bang forechecker with powerful leg drive that he uses to jolt bigger defenders off the puck. Podkolzin takes direct routes to the puck, and he anticipates eventual avenues of approach to be used by opposing puck carriers. His foot speed, edge work and agility are excellent, and he should be considered a breakaway threat in open ice. Podkolzin possesses a clear understanding of the game, and his nonstop motor and desire to be the best makes him an asset regardless of whether he’s scoring or not. Keep an eye on his temper and attempts to make big hits.

Podkolzin is a good skater, featuring a powerful stride that generates good speed and also allows him to fight through checks and control the puck down low. He has a good first step and above average acceleration. Once he gets a step on a defender he can drop his shoulder and take the puck to the net. Podkolzin has excellent balance and wins battles on the boards and in front of the net. Overall his speed is good but not great, however, the power and balance set him apart. Profiling as a power winger, he works well below the hash marks in the cycle game. Podkolzin can take the puck to the front of the net and has the ability to finish when he gets there.

Podkolzin has good stickhandling skills which make him tough to defend in one-on-one situations. He can beat defenders out of the corner, or off the rush. Podkolzin also has very good passing skills with the vision to find open teammates and the skill to open up passing lanes and get the puck through. He creates turnovers and offence through a strong forecheck and by quickly putting pressure on defenders. Podkolzin is powerful and wins his battles on the boards and creates problems in front of the opponent’s net.

All that said, the true standout area of Podkolzin’s game is his ability to be a sniper. A natural goal scorer, Podkolzin has a strong wrist shot with a lightning quick release. This release can fool goaltenders and he beats them off the rush. He has shown the smarts to use a defender as a screen when taking this shot. His soft hands also allow him to finish in close to the net. Most impressive though is his one-timer, which is a rocket. Podkolzin finds the soft spot in the defence and gets himself open for the pass.

Podkolzin brings high-compete level and an effective defensive game. He is willing to show the same battle in his own end that he brings in the offensive end. Podkolzin fights for loose pucks and supports the defence down low. He uses his stick well to break up plays. Podkolzin has shown his instincts and defensive play on the penalty kill and is trusted by his junior level coaches in key situations.

Podkolzin is close to being NHL ready but as mentioned above, whatever team drafts him will need to have patience due to his KHL situation. He could be a first line winger in the NHL, using both skill and power to put up points. While this is by no means a talent comparison, his game and style is reminiscent of Rick Nash.