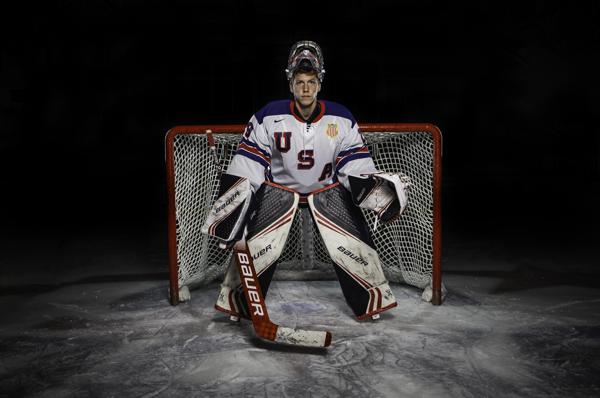 With the 46th overall selection in the second round of the 2020 NHL Draft, the Chicago Blackhawks selected goaltender Drew Commesso.

This is only the third time in 20 years the Blackhawks have taken a goaltender in the second round. Corey Crawford (52nd in 2003) and Kent Simpson (58th in 2010) are the previous two second round picks between the pipes. In 2001 the Hawks selected Adam Munro 29th overall in the first round.

He posted some of the best numbers we’ve seen in the USNTDP in a while. Commesso plays a more aggressive game inherently, but he does a great job staying on top of plays and reading through traffic. He rarely gets caught moving across the crease, owning every inch of space with confidence. He skates at a higher level than most of his fellow draft-eligibles.

Have watched Drew Commesso since he was 14 with the South Shore (Massachusetts) Kings. He’s done nothing but get better each year. Very athletic with intense compete level. CHI got themselves a good one. https://t.co/nG9p3LrAMY

Commesso had an excellent season, being one of the better NTDP goalies in recent seasons and one of the best players on that team. Commesso impressed me the more I watched him. I had skepticism coming into the season on whether he had NHL quality quickness or sense, but he showed that over the course of the campaign. He’s a quick goalie, I debated putting a 60 on his athleticism, but in control with how he moves around the crease. He reacts quickly and tracks pucks well, so despite not having elite quickness, he can get to a lot of pucks. While he’s often square, he can make the high difficulty save when he needs to. He’s a player uniquely affected by the shortened season and no U18 worlds because he only had 27 starts on the campaign. I’m not overly confident in his production due to the sample size, but he’s also one of the youngest players in the draft so there’s a lot of room for projection.

Seth Appert, coach of U.S. NTDP U18, on Commesso: “He’s very consistent. Historically, his numbers are among the best at the program. He doesn’t let in the ones that squeak through. He makes everything look easy.”

Commesso has good size and poise in the net, plays a technically sound game and doesn’t waste a lot of movements. He had very few bad outings this season and seemed to thrive in games where he saw a lot of pucks.

Skating and Talent Analysis
Commesso is 6-foot-2 and takes full advantage of every inch. He gets well out of the net, cutting down angles and challenging shooters. He is able to get back quickly if an attacker drives the net and tries to beat him on the deke. Powerful legs also allow Commesso to get from post to post quickly. He tracks the puck well and anticipates plays well, allowing him to get square to the puck. His angles and positioning are almost always spot on.

Commesso gets down in the butterfly quickly. His strong legs take away the bottom of the net. Meanwhile, his quick glove hand is effective at taking away the top of the net. He fights to find the puck through traffic, competing well when screened. Like many young goalies, Commesso will need to work on his rebound control. He often kicks pucks out in front of the net instead of getting them safely into the corners. Commesso is good at catching pucks on his glove side, but shots on the high blocker can also lead to rebounds. Commesso’s compete level and his athleticism help him to recover and he can often make a big save even with those rebounds going out.

Puck Handling
Commesso is an excellent puck handler. He gets out of his net often to cut off dump-ins and acts as a third defenceman back there. This helps his team to start the transition game quickly and limits the opposition’s forecheck. Commesso is accurate with his first pass to his defenders. He’s even been known to clear the puck off the glass and out of the zone when killing penalties. He can also make a long pass and hit a forward in the neutral zone if the other team gets caught making a line change.

Mental Makeup
Commesso is calm and composed in the net. He does not let a bad goal get to him and is prepared to make the next save. His composure provides leadership, as the NTDP defence seems to play better and more confident when he is in net, as opposed to when his back-up, Noah Grannan takes the crease. Commesso does not get rattled when facing a lot of shots or heavy traffic. He is also ready to make the next save even when his team has controlled the puck for long stretches. He remains focused in all situations. Commesso also reads the play well, knowing when his teammates need him to freeze the puck for a whistle, or when he should keep it moving so they can make a quick counterattack.

Projection and Comparison
Young goaltenders often need time to mature and Commesso is no different. Some time in the NCAA with BU will certainly benefit him. It will also allow him time to get in the gym and build a bit of a leaner body which he will need to go through the stresses of pro hockey in the future. He is a potential number one goalie down the road if he can continue to develop. The biggest weakness right now is his rebound control. Commesso’s game is reminiscent of Marty Turco, however, this is a stylistic comparison only and not one based on skill or potential.