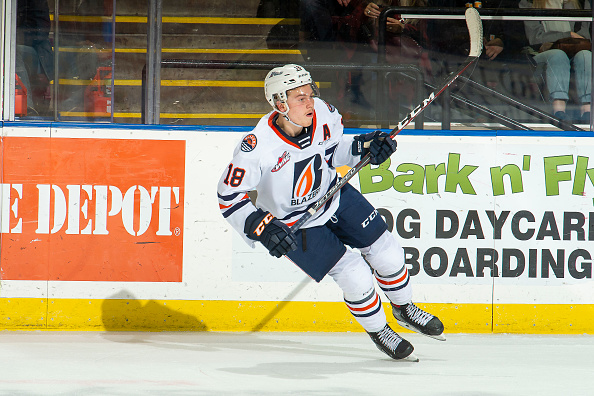 As the Stanley Cup Final nears completion, it becomes time to look ahead to the 2020 NHL Draft. The first round of the 2020 draft is on Tuesday, Oct. 6, giving teams a limited amount of time to be ready for what will undoubtedly be a crazy event filled with trades helping teams get cap compliant.

The Chicago Blackhawks have the 17th overall selection. In the coming days we will preview a number of players the Hawks might consider when they’re on the clock.

Zary was one of the top players in the WHL in his third season in the league and the major reason why Kamloops led the WHL in scoring. Zary is a very entertaining player, as he’s one of the most skilled players in the draft. His touches with the puck are very quick, he’s extremely creative and he can beat defenders clean consistently. He had numerous moments this past season where he pulled off a highlight real-caliber play. Zary is a very smart offensive player. He can make the seam passes and find teammates very well, but also makes plays happen through unconventional ways. He scored a lot of bad angle goals this season, and he finds teammates in situations where there doesn’t seem to be a play. Zary is a highly competitive player. He doesn’t just dangle on the perimeter, he attacks the net, he pressures defenders and he is in the face of his opponents constantly. He can kill penalties and run your power play. The major knock on Zary is his skating. Some scouts think it’ll be pro average, some think below-average. I lean to the former camp. It’s not great, and the stride breaks down at times, but I think the stride is good enough that he’ll be able to skate at the NHL pace.

NHL scout on Zary: “He’s full of skill, hockey sense and competitiveness. You can use him in any situation and he won’t disappoint you. The skating will need to come, but it will get there with strength.”

Skating
Zary is a good skater, if somewhat unconventional. His stride can be a bit short and choppy at times, but this doesn’t seem to take away from his speed. He is still above average in terms of his top-end speed and he reaches that quickly with good acceleration. Zary also has very good agility and edgework. This helps him to get around defenders, both with and without the puck. Strong backwards skating also helps him to play a 200-foot game. Zary has a strong stride, that helps him to fight through checks and get to the dirty areas of the ice. It also helps him to work along the boards. If he can improve his lower body strength, this will improve even more going forward.

Offensive Game
Zary is at his best working in the dirty areas of the ice. He gets to the front of the net both with and without the puck. From there he can bang in a rebound, deflect a teammate’s shot into the net, or one-time a quick pass on goal. He can produce points in the dirty areas of the ice. Zary is willing to battle for loose pucks along the boards. He is also good at creating pressure on the forecheck, forcing opposing defenders to make quick decisions and capitalizing on their mistakes if they don’t. Zary’s stick-handling is strong and he protects the puck well on the cycle and makes plays in the slot. He has good vision and passing skills allowing him to set up teammates for scoring chances.

Zary can also score with a good wrist shot or snapshot. His shots are hard and accurate They also feature a quick release. Zary is a smart player who anticipates the movements of his teammates. He gets open without the puck and sets himself up to take that pass, fire that puck on net, or quickly keep it moving and get it to a teammate. He often makes the smart play with the puck on his stick.

Defensive Game
Zary plays a two-hundred-foot game, as he is not afraid to be involved in his own end. He brings good back-pressure and helps his team’s defencemen down low. He supports his teammates against the cycle game. Zary also uses his high-end hockey IQ in his own end. His positioning is solid, he reads opponents well and he has the anticipation and an active stick necessary to create turnovers. He is also willing to play physically along the boards or in front of the net. Zary does the little things right and helps his team to win games. He is willing to put his body on the line to block a shot. He is also strong in the faceoff circle. Zary is a natural leader and his teammates follow his on-ice example. He can also play against opponent’s top lines and on the penalty kill.

Projection and Comparison
Zary is the type of player who will be loved by his coaches, no matter where he is playing. His solid all-around game means that he can be used in any situation, from the power-play to the penalty kill. If Zary reaches his potential he can be a top-six centre at the NHL level. He will likely find himself back in the WHL next year, continuing to work on his skating and mature physically. He could also be part of Team Canada at the World Juniors. Following that, as a late birthdate, he will be eligible for the AHL in 2021-22. He will likely need those two years before he is NHL ready. Zary’s game is reminiscent of Bo Horvat. This is a stylistic comparison only and not one based on skills and ability.