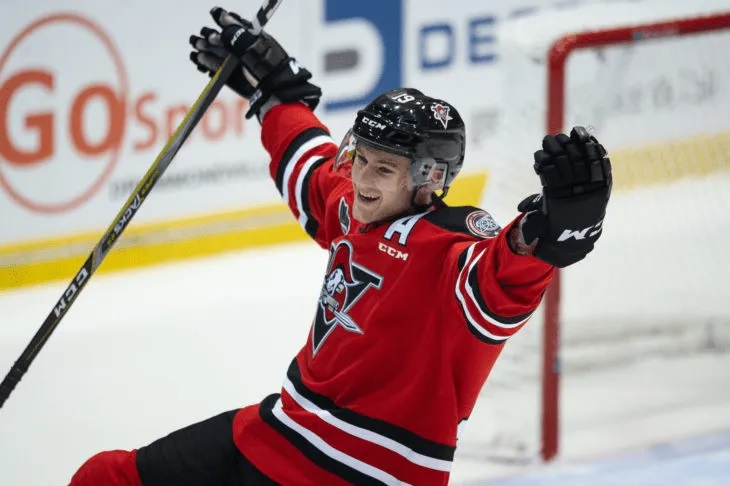 Mercer followed up an impressive 17-year-old season with a better 18-year-old one, as a top player in the QMJHL and a member of Canada’s U20 team. Mercer is a versatile player. Offensively, he’s an exciting player. He has high-end skill with the soft hands and creativity to beat a lot of defenders. He has the quick-twitch in his hands to be unpredictable and make a lot of great plays in tight areas. He’s a very smart player who moves the puck well inside the zone, finding seams and looking off defenders like a pro. Mercer can also score from a distance if given space, but I think his playmaking is more impressive. He’s a competitive two-way center who can be effective in a lot of situations. He plays in the interior third of the ice a lot and can kill penalties. His main drawbacks are his average feet and lack of NHL caliber explosiveness as well as the minor fact of how he slowed down following a trade to Chicoutimi.

Philippe Boucher, GM of the Drummondville Voltigeurs, on Mercer: “He has a lot of skill. He understands the game very well, he can play center or wing, he’s a very well-rounded two-way player.

Skating
Mercer is a very good skater, who always keeps his feet moving and this helps him play a 200-foot game. He may not be the fastest player in the draft, but his speed is still well above average. The fact that he is smart with his positioning and his feet are always moving, help him to seem faster than he is. Mercer has excellent edgework and agility. This allows him to beat defenders in one-on-one situations. Mercer has excellent lower-body strength already. This gives him a powerful stride and he is able to fight through checks. He also wins battles on the boards and in front of the net. This area of his game should only improve as he matures and gets stronger.

Offensive Game
Mercer has very good hands and can beat defenders in one-on-one situations. His speed and agility allow him to take a defender wide and cut back to the front of the net. He can score goals with an excellent wrist shot. If defenders back off to defend against his speed, he has the smarts to use the defenceman as a screen and put that wrist shot on net with a quick release. Mercer also has a very good snapshot, one-timer and backhand. His shots feature a quick release, which makes them even more effective. Mercer can also score goals in tight, with the quickness to pounce on rebounds and the hand-eye coordination to get deflections.

Mercer is quick on the forecheck, pressuring opposing defenders and creating turnovers. He is willing to play a physical game, getting involved in battles on the boards and establishing his position in front of the net. Mercer will improve this aspect of his game as he gets stronger. His stickhandling and puck protection skills are also good, helping Mercer to be effective in the cycle game. He also has good vision and passing skills. In extending the play, Mercer gives his teammates time to get open. When they do, he can make a quick move to create a passing lane and set them up for a scoring chance. He is also a smart player who often makes the right play with the puck. He can also play the role of playmaker when leading the rush.

Defensive Game
Mercer is an effective defensive player as well. He is able to get back and support the defence down low. He works hard on the backcheck, bringing effective backpressure against the transition game and physical support down low against the cycle. Mercer has very good positioning and an active stick. This helps him to create turnovers and he is able to quickly transition them into offensive opportunities. His ability to cut down passing and shooting lanes has helped Mercer to be an effective penalty killer. Transitioning to centre this year, Mercer has shown some ability to win faceoffs but will need to continue to work on this aspect of his game.

Projection and Comparison
Mercer spent his first two years in the QMJHL mainly playing on the right wing. This season, he spent more time at centre and was especially effective there. He will need to continue to improve his skating and faceoff skills in order to remain in the middle of the ice but that is not impossible. In any event, he has the potential to be a top-six forward, capable of playing in all situations if he is able to meet his potential. His game is reminiscent of Jonathan Toews, but this is a stylistic comparison only and not one based on skill or ability.