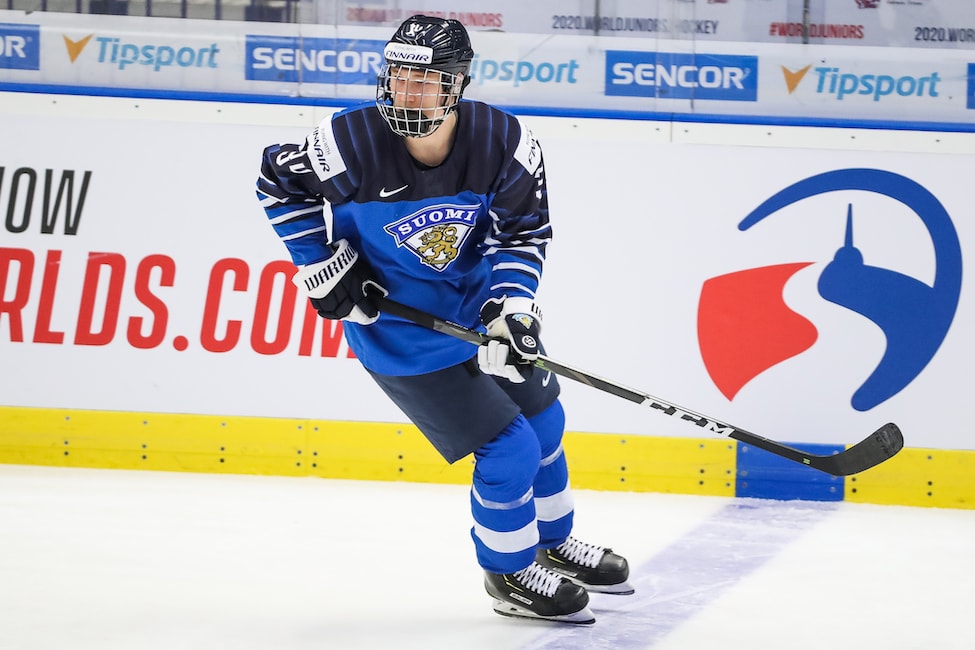 What will the Chicago Blackhawks do with the 11th overall selection in the first round of the 2021 NHL Draft? That’s a question we’ve started trying to answer over the past week as we have started our annual pre-draft prospect profile series.

“Räty is one of the biggest mysteries I can recall of the last few years watching prospects. He was a go-to player for Finland coming up, as the No. 1 center for a solid U18 age group last season and making Finland’s U20 team a year before his draft, while also playing well versus men. He looked like a high-skill playmaking center with good athletic tools. Then this season came and the offense disappeared. Räty’s game looked so simple between the junior and Liiga levels and he was cut from the U20 team. Various scouts have varying theories. Some think he lacks speed. Some think he lacks hockey sense.

I’ve seen enough over the years to still believe in the player, but it’s fair to say I approach him with a large degree of caution. He has skill in his game. He has quick-twitch hands and is great at handling the puck in small areas. He’s a fine, albeit awkward, skater who makes skilled plays on the move but needs to add more pace to his game. His playmaking and shot are both solid quality, but neither are spectacular. He has some physicality to his game and brings energy to shifts. That’s the Räty I think is there, and may show up in future years, but he didn’t this season. In a sentence, Räty projects as an NHL second-line center after being one of my top-ranked prospects coming into the draft season.”

#21 overall prospect
“One of the most polarizing and uncertain prospects in this entire draft, Räty is as confounding as he is intriguing. This year did not go well for him and he’s admitted that the draft season and expectations weighed on him. He was presumed a No. 1 for this class for a few years, but things didn’t go that way this year. While he may no longer be one of the top prospects in this class, I still see a quality prospect with a chance to grow his game even further. He had six points in 35 games in Liiga this season, didn’t make the World Junior team and didn’t have any other chances to showcase his ability to scouts. He was recently named to Finland’s U20 camp roster, which is good that he’s back in the mix there. The thing about Räty that makes me hedge more is that there was such a steep regression from last season to this season. He needs to rebuild his confidence, which is a taller order and requires some special care from the team that drafts him. You get him back on his game, though, and Räty could one day be a top player from this class. In better years, he might slip further, but I still believe he’s got the chance to turn it around.”

Skating
Räty is a good but not great skater. He can get around the ice well enough and keeps up with the play but he is not going to beat opponents purely on his footwork. His first few steps are good, and his acceleration is decent. His top-end speed is also good but does not challenge the best players in the draft. The best aspect of Räty’s skating is his agility and edgework. He has very good lateral movement. This allows him to get by defenders, both on the rush and in the offensive zone. When facing his own age group, he is strong on his skates with the ability to battle through checks and keep going. He also wins battles on the boards and in front of the net. However, he must get stronger to face men.

Offensive Game
Räty is much more of a playmaker than a scorer. His hands are outstanding. He can stickhandle in a phone booth and uses that ability to beat defenders on the rush as well as to create opportunities in the offensive zone. He is also able to protect the puck in the cycle game, extending plays and giving his teammates the opportunity to get open. When they do, he has the vision and passing skills to pass the puck through tight areas and create scoring chances. Räty also has a powerful shot and a quick release.

Räty needs to be better at getting to the middle of the ice though. He plays a bit too much of a perimeter game and this hurts his scoring potential. While his shot is powerful, it often comes from the outside, making it easier for goalies to stop. If he can get those shots off from between the faceoff dots, he will create more offence. While he does this well against other teenagers, he needs to do it more often when playing against men. Räty should be better at battling through those dirty areas as he becomes stronger and more confident.

Defensive Game
Räty shows that he is willing to play a more physical game in the defensive zone. He works hard to support the defence down low and keep opponents to the outside. His positioning is strong, keeping his body between his man and the net and using his stick to cut down passing lanes. A smart player, Räty reads the play well and anticipates the plays opponents will try. This helps him to create turnovers. When he does get control of the puck, he is able to quickly transition the puck up the ice. Räty is willing to battle for loose pucks in the defensive and neutral zones. He also does a decent job in the faceoff circle.

Projection and Comparison
The questions about Räty’s offensive game have made it more likely that he will become a second-line centre than carry a franchise. However, this is still valuable. This is even more true when one considers that Räty’s strong defensive game can continue to grow and he could be used against the other team’s best players and on the penalty kill. The franchise that drafts him will need to have patience and need to work with Räty in taking the puck to the middle of the ice. He should be back in Finland next year and on the Finnish World Junior team, looking for redemption after being left off this year’s squad. When he’s at his best, Räty is comparable to Nazem Kadri, but this is a stylistic comparison only and not one based on skill and ability.