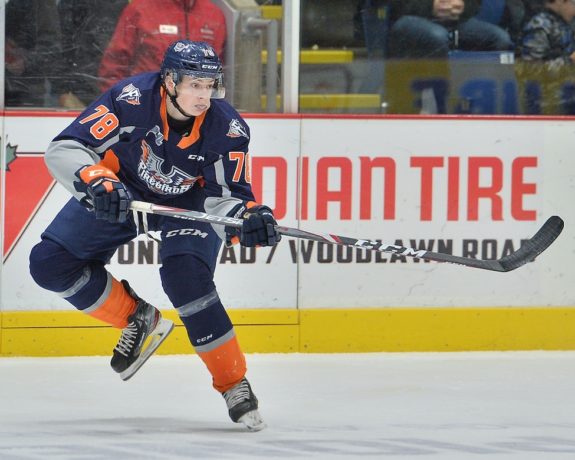 “Othmann went to Switzerland’s second-tier pro league without an OHL season, where he was up and down during that stint. At the U18 worlds, he was excellent, though, as one of the better wingers in the tournament, which looked more like his strong underage season. Othmann is a skilled goal-scorer. He has very quick hands to make plays in small areas and beat defenders. He sees the ice well, showing the ability to create offense with his vision. His shot can beat goalies from range and is his main weapon. He competes well enough to win pucks versus men and is quite physical, although he can be a little perimeter. He lacks the ability to separate with his skating, which is his main drawback. In a sentence, Othmann projects as a second-line NHL winger who will be able to score on and irritate opponents.”

#24 overall prospect
“Normally a member of the Flint Firebirds, Othmann headed to the second division in Switzerland where he got 34 games in. Othmann had 16 points, averaging nearly half a point per game in his first pro experience. He has one of the better shots in this draft with a quick and accurate release. It gets on goaltenders in a hurry, sometimes before they know it’s coming. His ability to shoot from the outside is especially important because he’s not the best skater. He doesn’t have that innate ability to get around defenders, but he uses defensemen well in getting his shot off and drawing them in before taking his chance. That scoring tool is especially intriguing, but Othmann also has good drive and gets on opposing defensemen in the forecheck. He can needle his opponents with competitive, agitating play with a goal of dispossessing them of the puck.”

Skating
Othmann can use some work on this aspect of his game. He has a bit of a clunky stride which robs him of both speed and acceleration. While he is able to keep up with the play due to smart positioning and high hockey IQ, Othmann is not really a threat to blow past defenders. He also could work on his edgework and acceleration. He loses speed in his turns and needs work on his crossovers. Othmann could also stand work on his stops and his first few steps. He really needs to work with a good skating coach in the coming years. Othmann has a strong lower body though. He is very tough to knock off the puck and fights through checks. Othmann wins battles in front of the net as well as along the boards.

Offensive Game
Othmann has an outstanding arsenal of shots. It is amongst the best in this draft class. His wrist shot and snapshot are both powerful and accurate. He can also get them off very quickly with an excellent release. His quick hands help him to change angles on the release and fools goaltenders. Othmann also has an excellent slap shot and one-timer. He has a real knack for getting open without the puck, leaving himself able to take a pass and fire it on the net. He also does a good job of driving the net both with and without the net. Othmann is dangerous in tight, with his quick hands and good hand-eye coordination. He can pounce on rebounds, one-time short passes, and get deflections.

Othmann is mainly a goal scorer but has a decent playmaking game as well. He controls and protects the puck along the boards, keeping the puck in the cycle and making smart passes to teammates. He is also able to make a quick pass through a tight passing lane if he sees a teammate get open. Othmann is aggressive on the forecheck, forcing defencemen to move the puck quickly and causing turnovers.

Defensive Game
Othmann’s defensive game is good but there is still some room for improvement. He is an aggressive, physical player willing to battle in all three zones. He supports the defence down low and also provides back pressure against the rush. Othmann is smart positionally however he can sometimes have a tough time containing his man away from the puck due to his lack of explosiveness. He can be beaten if his man makes a quick move into open space. Still his instincts are good and he reads the play well. This helps him to still cut some of these plays out even with his slower feet. If he can improve his footwork, he will become an even better defensive player.

Projection and Comparison
Othmann is a smart and physical player, with a high-end work ethic. He has the type of makeup that coaches will love and will be given every opportunity to develop into a top-six forward in time. However, he needs to work on his skating if he wants to really make an impact at the NHL level. He’s a bit of a safe pick though, as Othmann will likely be able to carve out a career on the bottom lines if he doesn’t hit his ceiling. If he does, he will be an outstanding complimentary piece, doing the dirty work for his line. Othmann’s game is reminiscent of Zach Hyman, but this is a stylistic comparison only and not one based on skill and ability.