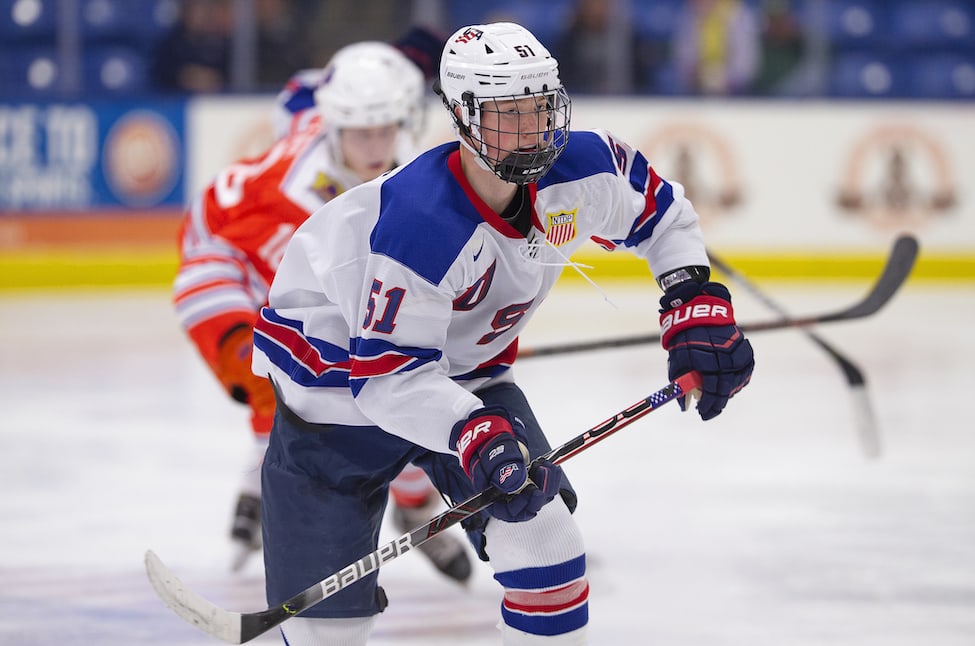 This year, the Chicago Blackhawks own the 11th overall selection in the first round of the 2021 NHL Draft. Earlier this week we started our annual breakdowns of players the Blackhawks might target with their first pick in the draft. Chicago will have options, but are looking to make an impact on the NHL roster soon.

“Lucius missed most of the season with various injuries but when healthy he showed what he did in his underage season, in that he could score a lot of goals and drive a team’s offense. Lucius is one of the most purely skilled players in the draft, with elite one-on-one skills and the ability to make defenders miss. He is known for his goal scoring, but he has good vision and can find seams and create in tight areas. His scoring is less due to an elite shot and where he scores. If you saw a heat map for his shots, it’s a big blob in front of the crease. Lucius lacks physicality and defensive value off the puck but he generates a lot of offense by going to the net. His skating is a concern and he will likely not be able to separate at the NHL level. In a sentence, Lucius projects as a strong top-six NHL forward who can be on a top power-play unit in a bumper/net position.”

#10 overall prospect
“Missing such a large chunk of the season while recovering from knee surgery and later missing the World U18 Championship after coming down with an illness just prior to the tournament, it was not an easy year for Lucius. When he did play, however, he was mostly dominant. He scored 13 goals in 13 games and even when he didn’t have a great game, he found a way to make an impact – usually on the score sheet. Lucius has a lankier frame that he can continue to build some strength onto, which will make him a bit more effective. But it’s his hand skills that especially stand out. Lucius has an innate ability to make plays to get inside and get to prime scoring areas when he has the puck on his stick. His release is so quick that by the time a defender realizes he has to close in, the shot is away and probably in the back of the net. Sometimes his shift-to-shift competitiveness can wane, but he doesn’t shy away from the tough areas of the ice and if he sees a chance to make a play, he doesn’t wait. I think he’s going to be one of the more entertaining players to come out of this draft, so long as he continues to build strength and bounce back from a season that was largely lost to him due to his injury and illness.”

Skating
Lucius skating is not at the level of other top prospects in this draft but it is not ability either. There are some issues with his stride. It is a bit short and choppy, especially in his turns. This can be improved with a good skating coach. Lengthening his stride would improve his power and speed. He can also improve his first few steps and his acceleration. This will help him to get to loose pucks, get in quickly on the forecheck, and beat defenders off the rush. Lucius’ agility and edgework are good though. He is able to make quick changes in direction. His lateral movement is also very good allowing him to open up shooting and passing lanes. He could stand to improve his core strength, which will help him to be even stronger along the boards and in front of the net.

Offensive Game
Lucius is a pure goal scorer. He has a very good arsenal of shots, as he is effective with his wrist shot, snap shot, slap shot, one-timer, and backhand. His shots are accurate and show good power. Lucius has quick hands. He is able to get his shots off extremely quickly. He also has the ability to quickly change the angle on his shot, fooling goaltenders. Lucius also has the ability to score in tight to the net, using those quick hands to elevate the puck quickly and into small open areas. His high-end hand-eye coordination allows him to tip in pucks and to pounce on rebounds. Lucius is a smart player, he finds open spaces on the ice and gets open to receive a pass from a teammate.

Luicus is also a very good stickhandler. He can control the puck in the cycle game, extending plays and waiting for teammates to get open. While more of a goal scorer than a passer, he has good vision and the ability to put the puck through tight areas and to a teammate. Lucius defers to teammates on the rush though. He prefers to give the puck to one of his wingers in the neutral zone and let them make the zone entry. Meanwhile, he finds open space to take a pass for a shot on net, or for a give-and-go style play. He shows good strength and balance in board battles against his age group but needs to get stronger to do it against bigger opponents at the next level.

Defensive Game
Lucius could use some work on his defensive game. He can sometimes get caught up the ice and is one of the last forwards back to his own zone. He also can leave the zone early, looking for a long breakaway pass. When he is committed to defence he shows a good stick and the ability to get on the right side of the puck. Lucius’ lack of strength can also be an issue when he supports the defence down low against the cycle game. He is strong in the faceoff circle though.

Projection and Comparison
Lucius has high-end scoring skills that cannot be taught and this makes him an attractive option going into the NHL Draft. However, he is probably a couple of years away from being NHL ready. Playing in the NCAA, he will get time to work on improving his skating, bulking up, and playing better defensive hockey. He has mainly been used at centre to this point in his career, but may be more effective on the wing given the skating and defensive concerns. His game is reminiscent of Derek Stepan, however this is a style comparison only and not one based on skill and ability.