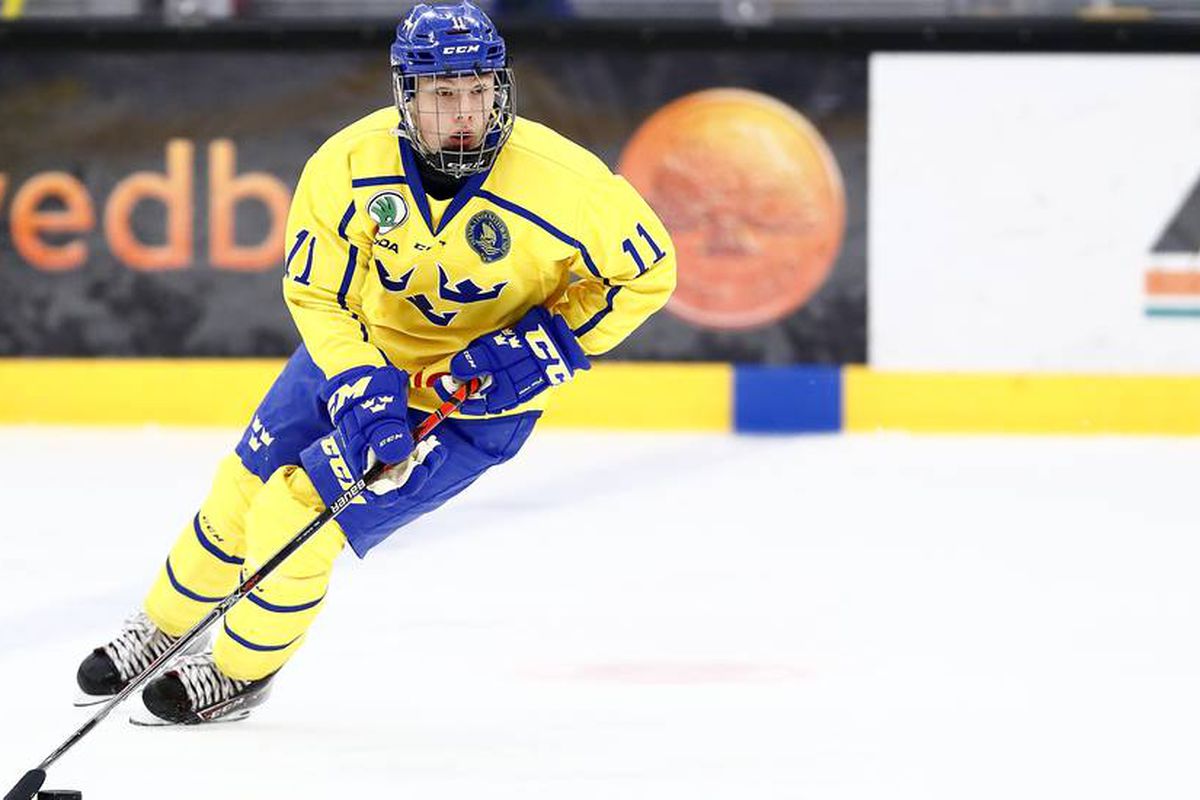 The Chicago Blackhawks own the 11th overall selection in the first round of the 2021 NHL Draft. We’re offering some thoughts on players the Hawks might consider when they’re on the clock at this year’s draft.

“Lysell was up and down this season after a great underage season, moving from Frolunda to Lulea midseason where he didn’t play much but ended strong at the U18 worlds. Lysell is one of the more talented players in the draft, who beats defenders consistently with his puckhandling displays. That he’s a great skater, with both good speed and edgework and can make very skilled plays at full flight, makes him a handful to defend. On his best shift, Lysell is using his skill and speed to get around guys and take pucks to the net, or making tremendous plays with pace to his teammates. His physical effort comes and goes off the puck, but with the puck he plays with courage. In a sentence, Lysell projects as a second-line winger who has the talent to dominate an NHL shift but may frustrate observers too.”

#12 overall prospect
“One of my personal favorites in the draft class, Lysell’s combination of skill and quickness allow him to play the game in a style more indicative of where the NHL will be in the next few years. Watching the young up and coming teams in the NHL, they all have players that can play with some burst and some quickness. Lysell has that and brings the finish to it as well. He dazzled at the World U18 Championship where he scored nine points including a pair of goals in Sweden’s quarterfinal win over the United States. His other goal was an end-to-end highlight reel tally against Belarus. Lysell is a nightmare in transition because his hands and feet work in tandem to mystify defenders. He often enters the zone with speed and has the hands to surprise the goalie with a move or quick shot. His ability to create for himself is a special tool. There are a few concerns about his ability to make plays within structure. So much of his offense is generated off the rush that you wonder if he’ll be able to be as effective when the games are slowed down and the defense has time to set up. I think his talent is unique, though. There aren’t many players in the draft that can move as quickly as he does while also being able to make the kind of plays he does. If you’re team drafts him, he’ll probably be one of your favorite prospects right away because he is a treat to watch.”

Skating
Lysell is one of the best skaters in this year’s draft. He has a very good first step and excellent acceleration. When there is an opening in the defence, Lysell is lightning quick, getting past his man and into an area to create a scoring chance. His top-end speed is also excellent. Lysell can take a defenceman to the outside and cut to the front of the net. His agility and edgework are also outstanding. He is able to make quick cuts and changes in direction. This, combined with his ability to change speeds, makes him very dangerous on the rush. Lysell needs to add muscle to his lower body though. He can sometimes be pushed off the puck a bit too easily. Increased core strength would improve his balance as well as his ability to win battles on the boards.

Offensive Game
Lysell pairs his outstanding skating with excellent puck handling skills. He can handle the puck and make plays while moving at top speed. This makes him very good in transition. Lysell’s skating and stickhandling ability generate odd-man rushes and effective zone entries. His stickhandling also helps him to slow the game down and protect the puck in the offensive zone. He cycles the puck well, giving his teammates time to get open and when they do he can hit them with a pass to create a scoring chance. Lysell has excellent vision. His quick hands change angles for the puck and create passing lanes. He also has the skill to make a pass through a tight area to a teammate. Lysell is good on the power play, directing traffic from the half wall.

While he is more of a playmaking winger than a shooter, Lysell can score goals as well. He has a quick and deceptive release on his wrist shot. His quick hands help him to change the angle on his shot and fool goaltenders. Lysell could have a stronger shot though. As it is he will need to be in close to beat NHL-level goaltenders. This could happen with increased strength though. Getting stronger will also help him to win battles along the boards and to establish his position in front of the net.

Defensive Game
Lysell’s defensive game is also very advanced for his age. He backchecks hard and supports the defence down low. While his lack of size and strength makes him vulnerable to bigger and stronger opponents, he mitigates this somewhat with a quick stick that is good at stealing the puck off of an opponent. He also does a good job of getting his stick into passing lanes and creating turnovers. Once those turnovers are created, he is very good at transitioning up the ice and creating odd-man rushes. Lysell is also strong positionally. He does a good job of staying between his man and the front of the net, forcing opponents to the outside and away from dangerous positions.

Projection and Comparison
Lysell projects as a possible first-line winger in the NHL. His advanced defensive game and the fact that he has already been playing against men mean that he may be NHL ready quickly. However, he likely needs to spend at least one more season in Sweden, getting stronger and producing offence in the SHL. He should also be an important part of the Swedish team at next year’s World Junior Championships. Lysell’s game is reminiscent of Mitch Marner. This is a stylistic comparison only though, not one based on skill and potential.