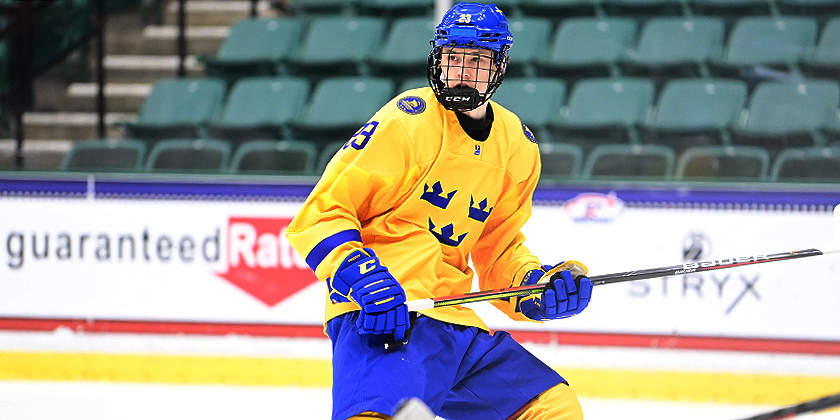 We’re still leaning heavily to the Blackhawks selecting a forward when the draft begins. There’s one more prospect for us to consider before Friday’s first round of the 2021 NHL Draft.

“Rosén hasn’t popped yet at the pro level, but as a junior, between the J20 and international level, he looks like a dangerous scorer at wing. Rosén is very creative with his one-on-one play, showing the ability to beat defenders clean with consistency. Rosén has impressive speed and is able to make a lot of his skilled plays through defenders and to teammates while on the move. His game has a lot of pace to it, which should translate to higher levels. Rosén didn’t get a shot grade but he shows flashes of an above-average shot. He’s OK off the puck, but he doesn’t shy from making plays to the net. In a sentence, Rosén projects as a middle-six NHL winger.”

#18 overall prospect
“A speedy north-south winger who can back down defenders on the rush, Rosén had his breakout moment this season at the World U18 Championship where he set a new high-water mark for Swedes in that tournament. His seven goals is an all-time record in that event by a Swedish player. Beyond that, he competes hard and plays reasonable defense. There’s a relative lack of high-end puck skills, though Rosén has a good shot. A reasonable concern about his game is that it doesn’t always have the same level of creativity of some of the forwards in this range. He didn’t put up numbers in the pro league this year, but was a point-per-game player in the U20 ranks. Despite not having a huge frame, Rosén is strong on the puck and protects well. The real standout trait for me, however, is his explosive speed that makes him an especially dangerous player on the rush and in transition. He can flip games quickly.”

Skating
Rosén is an outstanding skater. His first steps as well as his acceleration are excellent. He is lightning quick and this helps him to be first on loose pucks. His ability to change speeds while moving through the neutral zone can fool defenders and helps him to create odd-man rushes. Rosén also has outstanding speed. He can take his man to the outside and cut to the front of the net. Rosén also has very good edgework and agility. He uses this to avoid defenders both with and without the puck. However, Rosén will need to add muscle to his frame. His lack of core strength can be an issue in his balance and in his ability to fight through checks. This should come as he matures.

Offensive Game
Rosén pairs his skating with excellent stickhandling. With his ability to make moves at top speed he is very good at moving the puck through the neutral zone and generating effective zone entries. This can help him to create chances off the rush or get set up in the offensive zone. Rosén is a pure sniper. He has an outstanding wrist shot with good accuracy and a quick release. His stickhandling helps him to change the shooting angle at the last second, getting around a defender or fooling a goaltender. His shot has very good power and could be even better with more strength on his frame. Rosén also has an excellent snapshot and a very good one-timer. His hands are good enough to score goals in tight. However, his lack of size and strength means he doesn’t win many of the net-front battles.

Rosén’s lack of strength also shows up in his work along the boards. He will again need to add muscle to be effective in this area against men. However, he gets in quickly on the forecheck and creates turnovers by pressuring the defense. His passing skill and vision are decent. However, playmaking is not the bread and butter of his game. He makes short, quick passes to the open man and then moves his feet, looking for open ice on a give-and-go. Rosén gets himself into good areas to shoot and is never afraid to fire the puck on the net.

Defensive Game
Rosén’s quickness also helps him in the defensive zone. He reads the play well and gets into passing lanes, creating turnovers and getting the puck up the ice. When a turnover is created, he is very good at starting the transition and getting the puck out of the zone. He is strong positionally and is willing to block shots when necessary. Rosén also provides effective backpressure, helping the defense against the rush. His lack of size can be an issue when defending against cycling forwards, as he can be pushed around by bigger and stronger opponents.

Projection and Comparison
Rosén has a very good all-around game and this will help him become a top-nine forward at the next level. The question will be if his offence can develop into a true top-six player. He will need to add strength and get better at winning battles in the dirty areas of the ice and along the boards. Rosén will also need to be more of a playmaking threat, to add variety to his game and keep opponents honest. His game is comparable to Viktor Arvidsson. This is a stylistic comparison only though and not one based on his skill and potential.