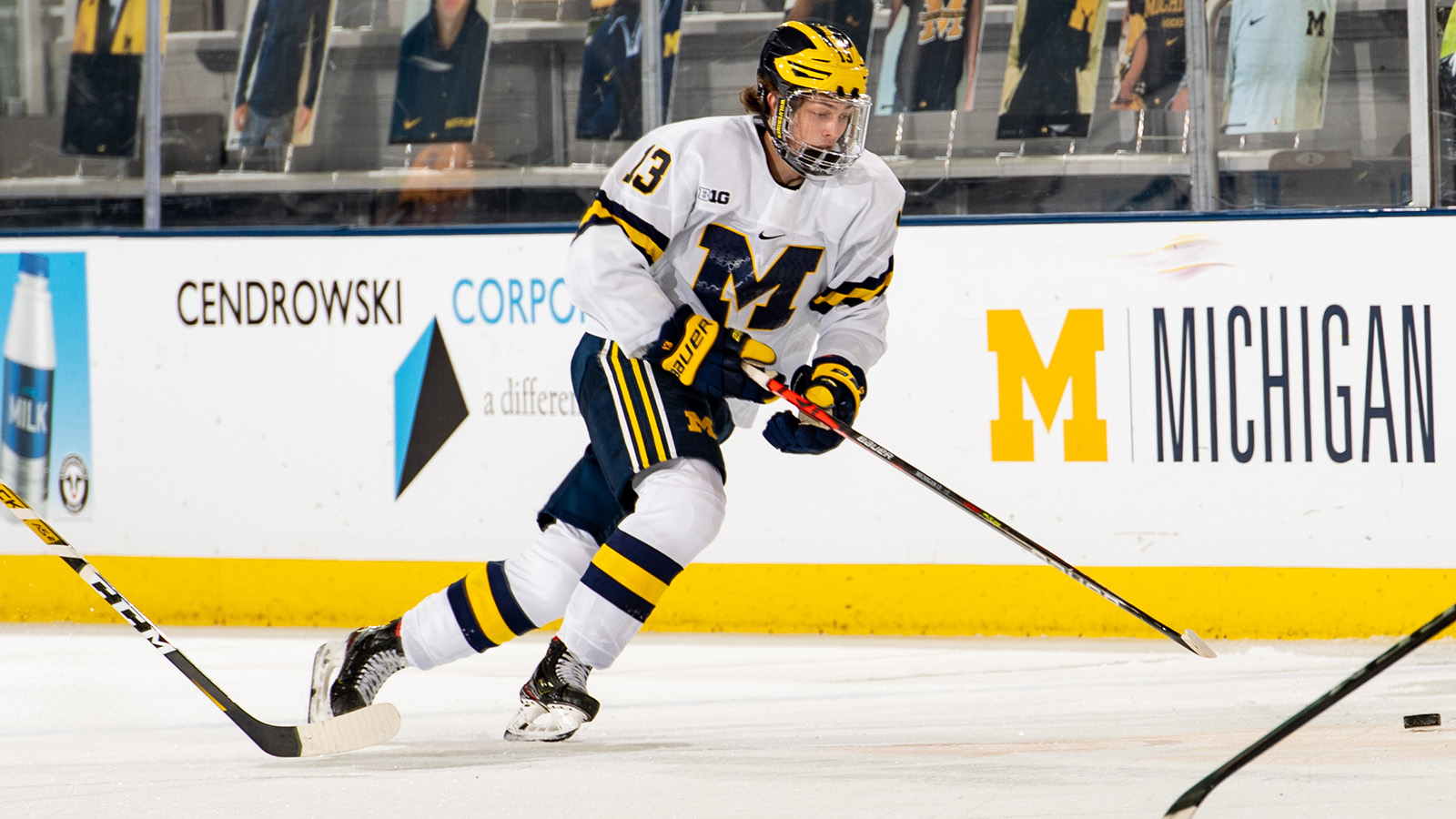 Now that the Blackhawks have officially posted their list of protected players for the expansion draft, there are a couple more names for us to consider before Friday’s first round of the 2021 NHL Draft.

“Johnson is the player you want to know about in this year’s draft in terms of dynamic skill and playmaking ability. A lot of his puck touches look unique from other players on the ice, with the ability to make between-the-legs and behind-the-back plays look routine. He’s a very creative playmaker who can make difficult plays in small areas consistently but can overcomplicate at times. Johnson has a decent wrist shot, which he showed more in junior than college. His game can lack pace and he’s not that hard to play against, but I wouldn’t call him soft either. In a sentence, Johnson projects as a top-line NHL forward, likely on the wing, who has the most star potential in the draft but also has the most significant physical drawbacks of the top prospects.”

#6 overall prospect
“One of the most creative, gifted puck handlers in this class, Johnson is a player with so many more options than the average forward. He’s got the skill to beat defenders one-on-one, but mixes that with poise and patience to let the game come to him and exploit the openings that he finds just by holding onto the puck. The game seems to slow down for Johnson when he has the puck on his stick and it makes him one of the more dangerous forwards in this draft. A legitimate shot-pass threat, he’s always looking for the best play he can make.

“Though he can play center, I don’t think there’s enough defensive value to comfortably project him there. His dynamic talent flourished on the wing last season and can maximize his offensive potential there. Johnson still needs to add some more physical strength, but the skill he has makes him such a difficult player to stop.”

Skating
Johnson is a very good skater. His top-end speed is very good and he reaches it quickly with a few smooth strides. Johnson also has an excellent first step. He wins races to loose pucks. His ability to change speeds also means that if he gets a step on a defender, he can accelerate by on the outside and cut to the net. His agility and edgework are also very good. They allow Johnson to carry the puck effectively through the neutral zone, avoiding defenders and generating clean zone entries. Johnson has a very slight frame though. He needs to add muscle to be stronger on the puck and improve his balance.

Offensive Game
Offensively, Johnson is creative and fearless. He will try a number of things that other players wouldn’t even dream of. This includes going for the “Michigan” or “Svechnikov” lacrosse-style goal, or going between his own legs to try and deke an opponent. He has high-end vision and can see the smallest of openings. Johnson is not afraid to try to pass through these tight passing lanes, or saucer it to a teammate. He extends plays, waiting for teammates to get open with his soft hands and puck control. He works the puck on the half-wall of the power play, quarterbacking things for his teammates.

Johnson’s hands allow him to handle the puck and make plays while moving at top speed. He is dangerous off the rush and can beat defenders in one-on-one situations. When defenders back off to respect his speed, he is able to use them as a screen and fire a shot on the net. His wrist shot is powerful and accurate. He gets it off with a very quick release. His ability to change the angle of his stick just before shooting also helps him to fool goaltenders. Johnson needs to get stronger and play in the dirty areas of the ice though. He’s willing to work in those areas, but isn’t always successful against bigger defenders. As he gets stronger, he will win more battles on the boards and establish his position in front of the net.

Defensive Game
Johnson is also good in the defensive end of the ice. He does a good job of bringing pack pressure against the rush. Johnson also understands his responsibilities in his own end, supporting the defense down low and working to cut off the cycle. He is good positionally and keeps him body between his man and the net. Johnson uses his stick to cut down passing lanes as well as to poke check opponents. This is another area where lack of muscle on his frame is a detriment right now though, as he can sometimes be pushed around by bigger opponents. When his team is able to retrieve the puck, Johnson is able to quickly transition to offence and creates opportunities by getting up the ice quickly both with and without the puck.

Projection and Comparison
Johnson has the potential to be an effective two-way center at the NHL level. He mostly played left wing as a freshman, but will likely transition back to center at some point. Johnson will need to work on his strength and do a little more in the dirty areas of the ice going forward, but his skill level is high and he is willing to go to the tough areas. His results against bigger defenders should improve as he grows into his frame. Another year or two at the NCAA level, with weekend games and plenty of time in the weight room would really help him. His game is reminiscent of Mikael Granlund, but this is a stylistic comparison only and not one based on skill or ability.