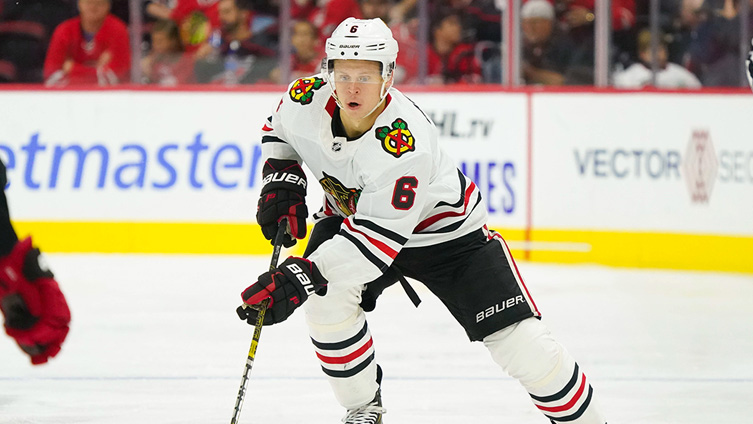 As we patiently wait for the Blackhawks to return from nearly two weeks off, we’ve started looking ahead to the NHL trade deadline options of the Hawks. Earlier this week we discussed what the Blackhawks should do before the deadline. If the Blackhawks look to sell, or make hockey trades to help both now and in the future, what are the teams they might speak with between now and Feb. 24?

Let’s look at three Eastern Conference teams that might line up for a potential deal with the Hawks in the coming weeks.

The Leafs have been dealing with a blue line that’s been missing Jake Muzzin and, more significantly, Morgan Reilly. Reilly is out long-term so Toronto is hunting for a defenseman who can help bolster the team as they try to get into the playoffs.

Toronto is looking at an upcoming summer in which they need to consider the futures of three UFAs on their blue line: Ceci, Muzzin, Cody Ceci and Tyson Barrie. Both Muzzin ($4M) and Barrie ($2.75) could be looking at fairly significant raises on their individual cap hits. On New Year’s Eve the Leafs gave former Blackhawks draft pick Justin Holl a three-year extension with a $2M AAV. Reilly has two years left after the 2019-20 season with a $5M AAV.

One player who the Leafs are reportedly looking to unload is Ceci. The 26-year-old has a $4.5M cap hit this season and is averaging more than 20 minutes per night on the Leafs blue line.

A potential fit for Toronto could be either Erik Gustafsson or Olli Maatta. Maatta has a $4,083,333 AAV for two more years after this season, which would give Toronto some stability on their blue line after this season if they have issues retaining both Muzzin and Barrie. Gustafsson would give them another puck-moving defenseman with a significantly lower cap hit ($1.2M).

Toronto has a lot of picks in the upcoming draft, but six of the ten are in the sixth and seventh rounds. So if the Blackhawks wanted to add pick(s) to their 2020 draft class, Toronto would be somewhat limited in earlier rounds.

Chicago’s lack of forward depth in the system should make them interested in Kasperi Kapanen. The 23-year-old winger has a $3.2M AAV for two more years after this one. If the Blackhawks included a center (read: David Kampf) in a deal with one of Gustafsson and/or Maatta, the Hawks and Leafs might be able to find a way to use picks to balance the equation. Toronto has been linked to Kings defenseman Alec Martinez ($4M AAV), who has one additional year remaining on his current contract.

The injury to Dougie Hamilton places increased importance on Carolina finding a suitable defenseman to help soften that blow. Carolina is also interesting because they’ve been linked to Robin Lehner in trade rumors frequently.

Of most interest to Blackhawks fans is Carolina having two picks in the first and second rounds of the 2020 NHL Draft. The Canes own Toronto’s first rounder in 2020.

Carolina has a few players they need to deal with in free agency this summer. Former Blackhawks defenseman Trevor van Riemsdyk and former Blues blue liner Joel Edmundson are both UFAs this summer, as are veteran Justin Williams (who just came back) and Erik Haula. Carolina does have four defenseman under contract beyond this season making north of $4M.

The Canes are reportedly looking for more of a defensive defenseman, which obviously means Gustafsson wouldn’t be the right name to consider. However, Maatta would would be intriguing if the Hawks and Canes were able to perform enough financial gymnastics to get the math to work.

If the Blackhawks took one of Carolina’s goaltenders back in a deal that included Lehner, the Hawks would have a veteran under contract for next year. James Reimber and Petr Mrazek aren’t going to replace what the Hawks have enjoyed this year with Lehner and Corey Crawford, but having a known commodity making either $3.125M (Mrazek) or $3.4M (Reimer) would provide some stability; both have one year left on their current deals after this season.

If Chicago brought back TvR as a rental ($2.3M) and Mrazek, they would likely need to eat some of either Maatta’s contract or Lehner to make it work for Carolina this year. However, the Blackhawks potential willingness to eat money in a deal might open the door for an improved draft pick coming back in a deal.

If the Hawks need to do some creative math to make a deal work with Carolina, Florida becomes a tougher sell because of their cap situation. They, too, need a defensive blue liner, which likely knocks Gustafsson (the most affordable defenseman Chicago could make available) off the list of likely fits.

Mark Pysyk, 28, is an unrestricted free agent at the end of this season and carries a $2,733,333 cap hit. However, Florida needs to think about the futures of Mike Hoffman and Evgeni Dadonov, both of whom are also UFAs this summer. Florida, like Carolina, has an expensive blue line; Aaron Ekblad, Keith Yandle, Anton Stralman and Michael Matheson hit the cap for almost $24M combined next year.

If the Hawks flipped Maatta for a combination of Pysyk and Acciari, Bowman might need to retain money on Maatta’s deal after this year for Dale Tallon to pull the trigger. But Acciari would be an affordable forward addition to the Hawks’ forward mix – he has won 51 percent of his faceoffs this year.