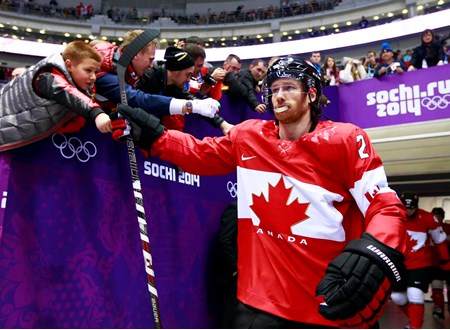 On Friday, Sweden won a tight game 2-1 with rival Finland to advance. Later, Carey Price and Canada shutout the United States 1-0 to move on.

On Sunday, six Chicago Blackhawks will play for a gold medal in Sochi. In the late game, Jamie Benn tipping home a Jay Bouwmeester pass from the point was the sum of the offense in an incredibly well played game. Price stopped all 31 shots from the Americans to earn the victory, while Jonathan Quick – who is far too accustomed to getting to offensive support – took the loss in spite of his 36 saves.

Patrick Kane skated 20:25 in the loss, but was the most dynamic playmaker for the United States in the game. He was credited with three shots on goal.

For the victors, Duncan Keith skated 20:23 without a shot on net. Patrick Sharp was credited with five shots on net – three coming in the first period – and saw 10:26 on the ice. Jonathan Toews’ line was tasked with shutting down Phil Kessel’s top scoring unit for the US and they were successful. Toews won 10 of 16 faceoffs and skated 6:23 of his 15:45 in the final period.

In their 2-1 victory, Sweden relied heavily on Niklas Hjalmarsson and Johnny Oduya. Hjalmarsson skated more than eight minutes in the third period – exactly 22 minutes in the game – and Oduya was on the ice for 21:25 in front of a sterling performance from Henrik Lundqvist. Marcus Kruger played 12:41 in the game and won 11 of 16 faceoffs.

14 thoughts on “6 Blackhawks To Play For Gold”