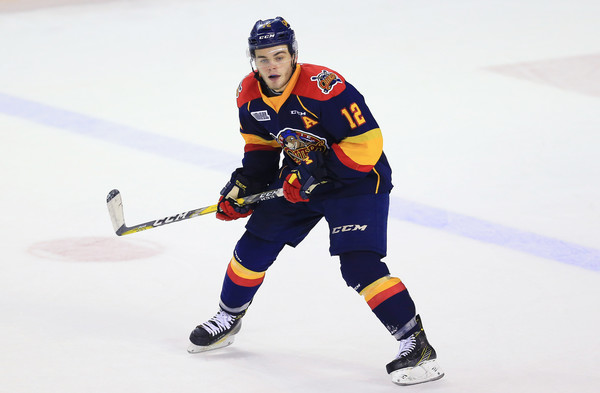 DeBrincat and the Erie Otters defeated the Mississauga Steelheads in overtime to clinch the J. Ross Robertson Cup as OHL champions. For his part, DeBrincat posted 13 goals and 25 assists in 22 postseason games after a record-breaking regular season of 127 points in 63 games. The Saint John Sea Dogs will represent the QMJHL in the 2017 Memorial Cup. Forward Matthew Highmore, who signed as an undrafted free agent with the Blackhawks in March, scored six goals with 18 assists in 18 postseason games. Highmore led Saint John with 89 points (34 goals, 55 assists) in regular season games. Highmore’s teammate, Nathan Noel, scored two goals win seven assists in his postseason run. In spite of missing a dozen games during the regular season, Noel had a strong year with 24 goals and 26 assists in 52 games. The Windsor Spitfires did not end their season with a league championship – they lost Game 7 of their OHL first round series – but, as the host team, will be on the ice as well. Graham Knott, who was traded to Windsor early this season, had two goals and two assists in his seven-game postseason. After being traded, Knott had 11 goals and 24 assists in 45 regular season games with Windsor.

The round-robin games of the Memorial Cup begin on Friday, May 19.