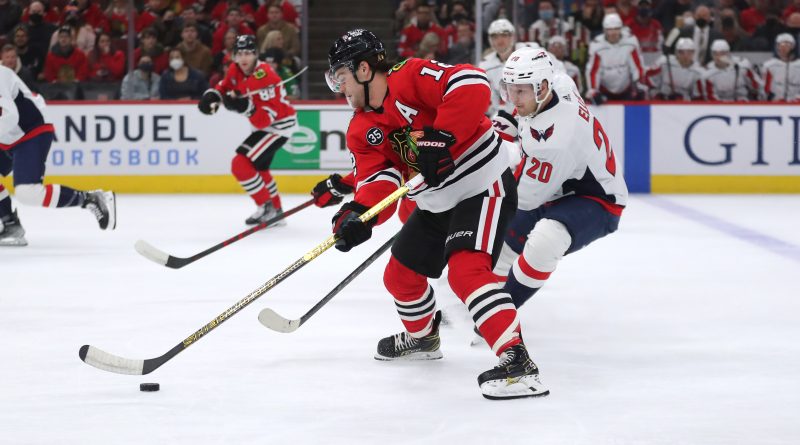 After having their game earlier this week postponed because the Flames are in COVID hell, the Blackhawks returned to the ice on Wednesday night against the Washington Capitals.

Brett Connolly and MacKenzie Entwistle made their way into the lineup for Chicago, Washington was without Evgeny Kuznetsov as their forward was placed in COVID protocol mid-afternoon. The Caps did get Nicklas Backstrom back in the lineup for the first time this season, however.

The most important return of the night, however, was Troy Murray was back in the radio booth. It was great to hear him back on the mic. We’re continuing to keep him in our thoughts and prayers as he fights the good fight against cancer.

Before the puck dropped, the Hawks took a moment to celebrate Marc-André Fleury’s 500th career win.

Of course the first time the Blackhawks were short-handed early in the second period, Washington made them pay. And it was a historic goal for Alexander Ovechkin.

Ovechkin’s 274th career power play goal ties him with Dave Andreychuk for most power play goals in NHL history. Nicklas Backstrom picked up his first point of the season with an assist on the record-tying goal.

Then Chicago’s offense exploded like we haven’t seen in some time. Martin Fehervary went to the box at 12:05 into the second. Nic Dowd joined him 103 seconds later and the flood gates opened. The Blackhawks remembered how to score! And on the power play; they were 5 for 41 on the advantage at home this season before the second period began.

Alex DeBrincat tied the game 17 seconds after Dowd went to the box during the 5-on-3 advantage.

With the advantages successfully completed, the Blackhawks weren’t done. Entwistle scored his third of the season 16 seconds after the Kurashev goal to give the Blackhawks a 3-1 lead. Three goals in a stunning 34 seconds!

Unfortunately Daniel Sprong cut the lead to one with 42 seconds left in the period.

Washington out-shot the Blackhawks 19-12 in the second period. Fleury stopped 30 of 32 in the opening 40 minutes of play while his teammates scored three times in their first 18 shots on net. The Blackhawks took their one-goal lead to the final period.

The last thing the Blackhawks wanted to do was give the Caps a power play, but Entwistle went to the box 50 seconds into the third. The Hawks were able to kill the penalty, however.

Lars Eller was able to tie the game with a soft backhand shot almost 12 minutes into the third period. Sadly, the three-goal outburst was now erased by the Capitals, and the Blackhawks were going to need a fourth goal — something the Blackhawks have done only three times in regulation since the start of November.

TJ Oshie tripped his former college teammate, Toews, with 6:18 left in regulation and the Hawks got a much-needed power play. To start the advantage, Derek King sent out Dylan Strome between Hagel and DeBrincat with Kane and Seth Jones on the point. Jones walked the puck into between the circles and ripped a shot that just missed the net after slipping through Ilya Samsonov.

Remember we noted how awful the Blackhawks’ power play had been at home? Well DeBrincat sniped home his second power play goal of the night — the third Chicago PPG of the game — with five minutes left in regulation and the Hawks had a 4-3 lead.

Hagel and Strome picked up the assists on DeBrincat’s 16th of the season and second of the game.

Washington pulled Samsonov with 90 seconds left in regulation. A desperate passing sequence saw Jake McCabe and Connor Murphy paying too much attention to Oshie (who cross-checked McCabe without a call), leaving Connor Sheary open in the middle of the ice. A Murphy shot block found Ovechkin, who somehow lost Kurashev. Ovechkin made a nice pass to Sheary in the middle of the ice who tied the game with three seconds left in regulation.

The play was reviewed to see if the Caps were offside on the play but they weren’t. The game was tied. And we were headed to overtime.

Fleury stopped 41 of 45 in regulation; his teammates put 26 shots on net in 60 minutes of hockey.

Kane was on the ice for the entire first minute of the overtime and won a puck battle against the boards to spring Dach and Caleb Jones on a 2-on-1. Dach ripped a shot that was stopped but Jones was there to knock home the rebound for a game-winning goal.

The Hawks did an exceptional job at the dot again, and it wasn’t just Toews. The Captain won 15 of 19 faceoffs in the game. But Stome won nine of 15, Carpenter won four of five and Dach won five of 11.

Dach had a strong game. In 17:15 he put three shots on net and was credited with two assists. Hagel also had two assists in the game while Caleb Jones (one goal, one assist) and DeBrincat (two goals) also had two-point nights.