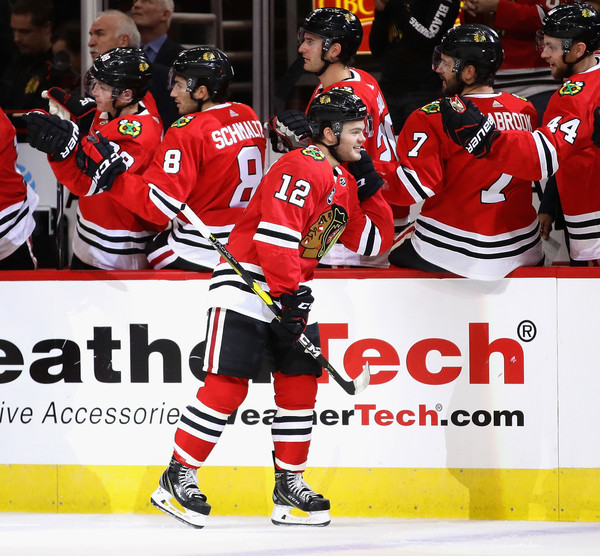 Stop me if you’ve heard this before: the Blackhawks took an early lead, gave it away, and went to overtime.

Yes, for the fifth time in as many games to begin the 2018-19 season, the Chicago Blackhawks needed overtime to decide an outcome.

Can we have a painting of this photo? #DK1K

On the night Chicago celebrated Duncan Keith’s 1,000th career regular season game against the hated St. Louis Blues, things got off to a nice start for the home team. Artem Anismiov scored his first of the year just after a penalty ended to give the Hawks a 1-0 lead.

You almost felt bad for the Blues, diving everywhere to try to keep the puck away from the net. But Kane patiently let everyone block a shot that hadn’t come yet and easily deposited the puck above the yard sale.

At the end of one period, Chicago held a 2-0 lead.

The start of the third period was not good. David Perron scored his fourth of the year at 1:44 and Schenn gave the Blues their first lead of the night three minutes later.

But the Hawks battled back.

Keith made a terrific play to get the puck to Jonathan Toews who set up Alex DeBrincat for the tying goal at 13:06 into the third.

Neither side would finish their scoring opportunities in the final six minutes and, once again, the Hawks would offer the fans free hockey.

In the overtime period, Schenn had a great breakaway chance to finish a hat trick two minutes into the extra session but Cam Ward came up with a big save.

Immediately on the other end Kane had a good look at the cage but whiffed on a one-timer.

Alexandre Fortin had a terrific night and saw ice time with in the top six during regulation. He got a chance for an overtime shift as well but wasn’t able to get a shot on net.

Inside the final 2:30 the Blackhawks controlled the puck through two full changes. DeBrincat and Kane both had really good chances but weren’t able to find the back of the net.

With nine seconds left in overtime, Erik Gustafsson found DeBrincat wide open on the side of the net. DeBrincat tapped home his second of the night and sixth of the season to earn the second point in the standings.

Somewhat fittingly, in Keith’s 1,000th game, it was Henri Jokiharju who led the Hawks’ defenseman in ice time. The rookie skated 24:04 with five shots on net, one hit and one takeaway.

Kane led all skaters with nine shots on net in a blistering night for Chicago shooters. Jake Allen faced 50 shots in the game, stopping 46 in the loss.

Brandon Saad, freshly demoted to the fourth line, skated only 10:14 – the second-lowest total for the Hawks. He picked up an assist and put two shots on net, but noticeably spent almost one-third of his ice time (2:43) on penalty kill duty.

The Hawks are now off until Thursday because the schedule makers for the NHL this year suck.