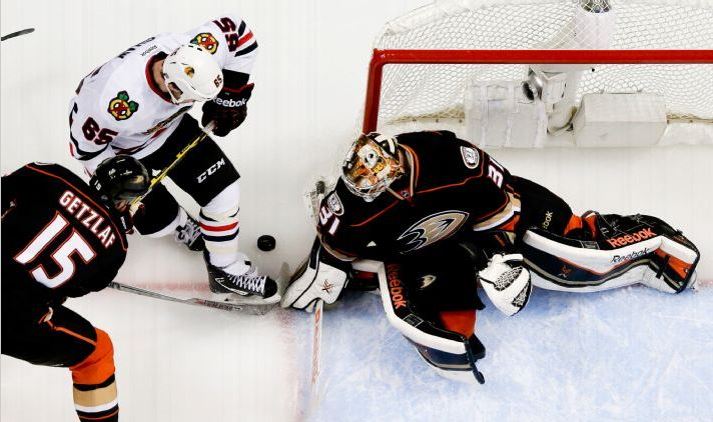 The Blackhawks did a nice job of controlling the puck, but the Anaheim Ducks were able to make their shots matter and took an early lead in the Western Conference Final with a 4-1 win on Sunday afternoon.

Chicago dominated much of the first period, out-shooting Anaheim 16-7 but looked up to see a 1-0 deficit after the opening 20 minutes. David Rundblad coughed up the puck and was then cross-checked right in front of Corey Crawford as a Hampus Lindholm shot made its way past the Hawks’ netminder for the only first period goal. Even with the score not in their favor, there was a lot to like about the Hawks play in the first.

At 4:17 into the second period, Rundblad was not able to clear the puck and the Ducks took advantage. Kyle Palmieri scored his first of the postseason, beating Crawford as he was falling to extend the lead to 2-0 in favor of the home team. The Hawks once again carried a great deal of the puck possession in the second, but weren’t able to get a shot past Frederik Andersen.

Until Brad Richards made an outstanding individual play.

Richards took the puck away from Francois Beauchemin and beat Andersen with 40 seconds left in the middle stanza to give the Blackhawks a goal on the scoreboard and some momentum heading to the third period.

Also in the second period, the Joel Quenneville Line Blender went into overdrive. He mixed up his left wings, moving Bryan Bickell up to skate with Marian Hossa and Jonathan Toews and skating Patrick Sharp with Richards and Patrick Kane. Brandon Saad saw action with Antoine Vermette and Teuvo Teravainen.

Chicago had two power plays in the opening eight minutes of the third but failed to convert on either; the Hawks finished the game 0-3 with an “advantage.”

Quenneville continued to mess with his lines, including a few shifts that had Teravainen with Toews and Kane, but the Hawks weren’t able to beat Andersen again in the game.

In the late stages of the third, Duncan Keith had a puck bounce over his stick and the Ducks were off to the races. Crawford was able to make the initial stop, and Brent Seabrook took care of the initial trailer on the play but Nate Thompson followed the play and was able to deposit the rebound to extend the lead to 3-1.

An empty net goal from Jakob Silfverberg put the final tally on the board. The initial attempt hit iron, but Silfverberg and Toews got mixed up and went to the ice and the puck appeared to bounce off the two (three?) bodies and found the empty cage.

Crawford finished the afternoon making 23 saves against 26 shots in the loss. Andersen was strong the entire afternoon, stopping 32 of 33 to earn the victory.

With Michal Rozsival out of the lineup, the Hawks needed more from their bottom two defensemen and it just wasn’t there. Rundblad was on the ice for the Ducks first two goals, and finished the game with three hits in 10:47. Kimmo Timonen was once again stapled to the bench, skating only 11 shifts and 5:15 in the defeat.

Keith skated a team-high 28:25 and, though the game’s opening faceoff had him paired with Seabrook, spent too many shifts baby-sitting Rundblad. The reigning Norris Trophy winner was minus-three on the afternoon. Seabrook skated 26:57 in the game and was credited with three hits and team-leading three blocked shots.

Bickell led the Hawks with seven hits but failed to register a shot on goal. Bickell, Rundblad and Timonen were the only three Blackhawks skaters to not get a shot on net in the game.

Richards was ultimately the one player who had a “good” game statistically for the Hawks, winning 10 of 17 faceoffs registering three shots on net with one takeaway. Saad led the Hawks with four shots on net, while five other Hawks joined Richards with three credited shots on Andersen.

Patrick Kane and Jonathan Toews only had one shot get on net each in the game, a credit to Anaheim’s defensive approach. The Ducks did a good job of blocking shots as four Anaheim defensemen were credited with three blocks each. Ryan Kesler won 15 of 28 faceoffs while Toews won only 13 of 27; those two will see a lot of each other in games played in California in this series.