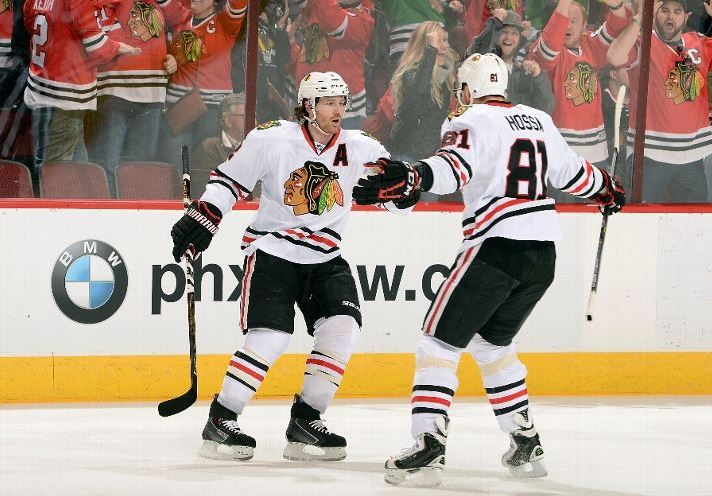 Whatever was ailing the Blackhawks offense was apparently left at the airport before the team departed for Arizona.

Because they unloaded on the Coyotes early and often.

Chicago jumped out to a 2-0 lead early with power play goals from Duncan Keith and Artem Anisimov. Patrick Kane picked up an assist on both goals and the Hawks’ power play showed life that it had lacked for over the last couple weeks.

But, as they tend to do, the Hawks let their opponent back into the game. Goals from Shane Doan and Zbynek Michalek inside of two minutes tied the game in the middle of the first period. Both goals were relatively soft from Corey Crawford, but he didn’t get much help from the skaters in front of him. The ugly tendencies that have cost the Hawks close games too often this season started to show up, and the Hawks needed to swing the momentum back.

They did just that with a third power play goal of the opening period when Artemi Panarin unloaded a missile to give the Hawks a 3-2 lead with 52 seconds on the clock.

Kane, Keith and Brent Seabrook had two points each in the first period as the Hawks special teams erupted. But the game was in no way under control.

Arizona made a change in net, replacing Anders Lindback with Louis Domingue. But that didn’t slow down the Blackhawks offense. Andrew Desjardins extended the Blackhawks’ lead to 4-2 only two minutes into the period, with the assists going to Teuvo Teravainen and Phillip Danault.

Chicago killed a couple penalties in the middle of the period, and then Kane scored his 22nd of the season. Andrew Shaw found a wide open Kane, who didn’t get off a clean shot but had a wide open cage to put the puck into. At this point, the wheels were completely off for Arizona.

Rookie defenseman Erik Gustafsson, who was recalled on Monday, picked up his fourth assist in seven NHL games on the goal.

The Hawks out-shot the Coyores 17-14 in the second period, but where Crawford had a few regrettable moments in the first period he was exceptional in the second. Arizona had a few good opportunities in the period but he held up strong and the offense extended the lead.

Through 40 minutes, ten Blackhawks had registered a point. Kane had three, while both Seabrook and Keith had two each. And the kids – Teravainen, Danault, Gustafsson – were involved as well. Chicago was rolling.

Jonathan Toews was one of the few Hawks who hadn’t recorded a point in the first two periods, but he led the team in shots on goal (four) and had won 12 of 17 faceoffs.

In the third, the Hawks added insult to injury. Desjardins scored a second goal, an ugly one that bounced off and over Domingue and somehow ended up in the net.

Desjardins two goals in the game give him three for the season.

Doan, in an effort to simply keep up with Desjardins, scored a second goal of his own on a Coyotes power play later in the third to cut the lead to 6-3.

As a Bryan Bickell penalty expired, Connor Murphy scored to make the score 6-4 with 6:57 left in regulation. Tobias Rieder did a nice job of setting up the Doan and Murphy goals and was credited with an assist on each.

And suddenly the game didn’t feel as comfortably out-of-reach.

The game got chippy in the final couple minutes. Marian Hossa went to the box after he hit Michalek high, and then Anisimov dropped Oliver Ekman-Larsson in front of the Hawks net with a huge crosscheck. Toews scored a short-handed empty net goal to push the lead to 7-4 before Doan added his third of the night on the power play to get the Coyotes back within two.

The tally for Doan tied Dale Hawerchuk for the Jets-Coyotes franchise record with 379 goals.

Doan’s third closed the scoring for the night as 12 goals between the two teams, and the Blackhawks hung on for a 7-5 victory.

Teravainen added his second assist and Keith picked up his third point of the night on Toews’ goal as five different Blackhawks had a multi-point game. Toews finished with a team-high six shots on net and two takeaways in the game.

Desjardins added two hits and two takeaways to his two goals in a solid effort. He skated 16:48 in the game as the Hawks buried underwhelming veterans on the bench and went heavy on their top lines. Bickell (6:47), Ryan Garbutt (5:50) and Dennis Rasmussen (6:21) barely got on the ice, but both Bickell and Rasmussen found a way to pick up a couple penalty minutes in their limited roles.

Crawford finished the night allowing five goals against 37 shots. The Hawks successfully killed six of the Coyotes’ eight power plays on the night.

The Hawks are back on the ice in Denver on New Year’s Eve against the Avalanche.