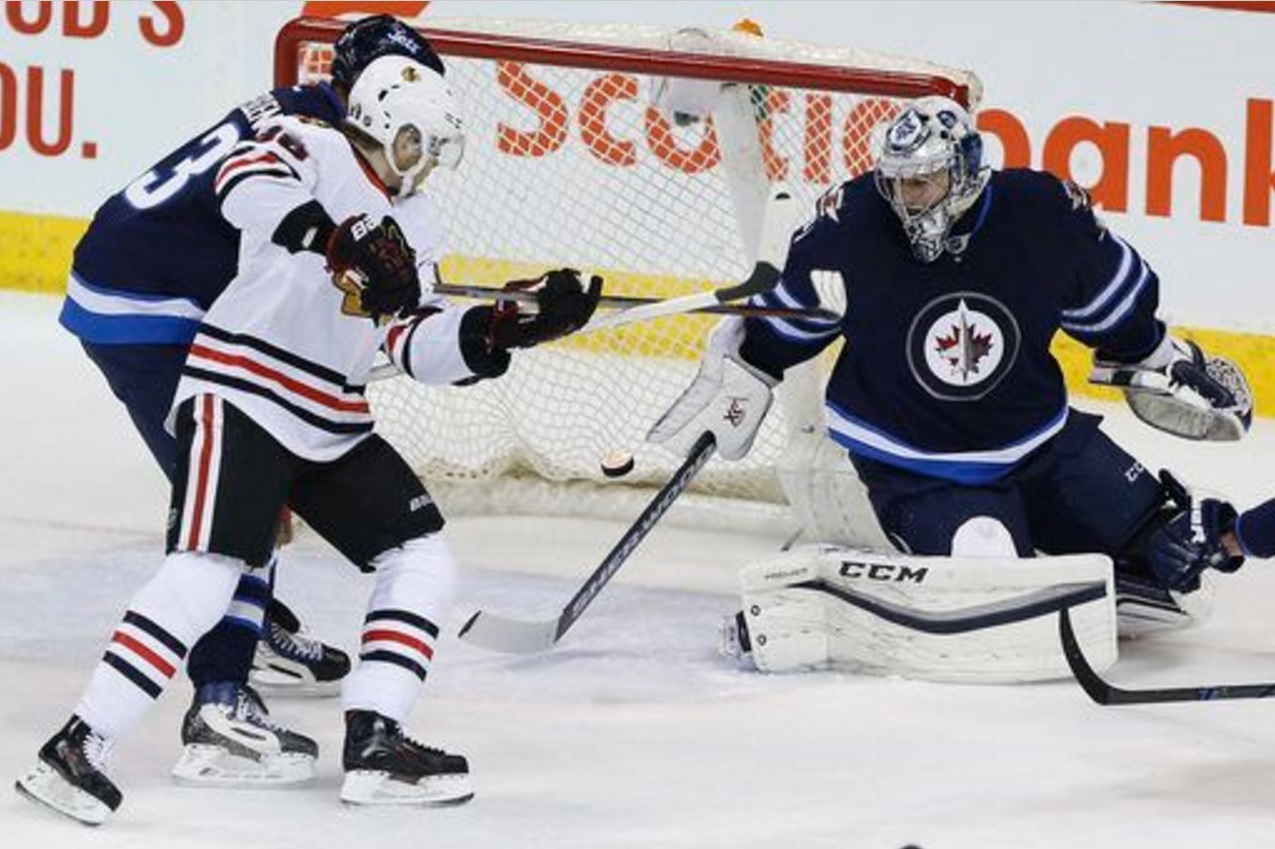 Apparently four in a row was enough.

The Blackhawks skated to a very vanilla draw in the opening 20 minutes, but took care of business with a flurry in both the second and third periods that produced two quick goals in each.

Patrick Kane, skating with Winnipeg-native Jonathan Toews and former Winnipeg captain Andrew Ladd, opened the scoring with his 39th of the season at 16:56 into the second.

Only 26 seconds after Kane’s goal, Marian Hossa scored his 12th of the season and the 498th of his career to extend the lead to two. Hossa skated with Artemi Panarin and Artem Anisimov; Anisimov picked up the assist on Hossa’s goal.

After a lovely tribute video was shown in the arena to welcome Ladd back, the Jets let their former captain score a goal three minutes into the third period. Toews and Kane picked up assists on the tally, giving Kane a two-point evening after a tough couple weeks for the league’s leading point producer.

Less than two minutes after Ladd’s goal, Tomas Fleischmann scored his 13th of the year to push the score to 4-0 in favor of the visitors. Teuvo Teravainen, who missed the morning skate because he’s still under the weather, didn’t look very bad on the ice. He was credited with the lone assist on Fleischmann’s goal, his 20th helper of the season.

Scott Darling started with Corey Crawford ailing and pitched a fabulous shutout, making some acrobatic saves in the early going to keep his team on top. Friday night was the second shutout of Darling’s career – and came on the one-year anniversary of his first in the NHL. Darling stopped 27 shots in the victory.

Richard Panik returned to the lineup and led Chicago with five hits in 11:20. Kane predictably led the Hawks with six shots on net. And, perhaps most importantly, the Hawks were able to roll four lines with a big lead late; Ladd was the ice time leader for Chicago forwards, but skated only 16:16 in the win.

Four of the Blackhawks’ six dressed defensemen blocked two shots, and Michal Rozsival played a much better game than his Wednesday performance as the Hawks also spread out the ice time on the blue line. Niklas Hjalmarsson and Duncan Keith were the only Hawks over 20 minutes in the game, but skated only 23:23 and 24:19 respectively.

The win comes at an important time for the Blackhawks, Nashville lost 4-1 in Washington on Friday night, and Dallas announced Tyler Seguin’s regular season is over earlier in the day. St. Louis is now only one point ahead of the Blackhawks for second place in the Central, but the Hawks have five more regulation wins than the Blues. Dallas’ lead is down to three points, with all three teams atop the division having played 72 games.

Minnesota visits the United Center on Sunday, and the Hawks will look to keep rolling against a Wild team that hosts Carolina on Saturday night.