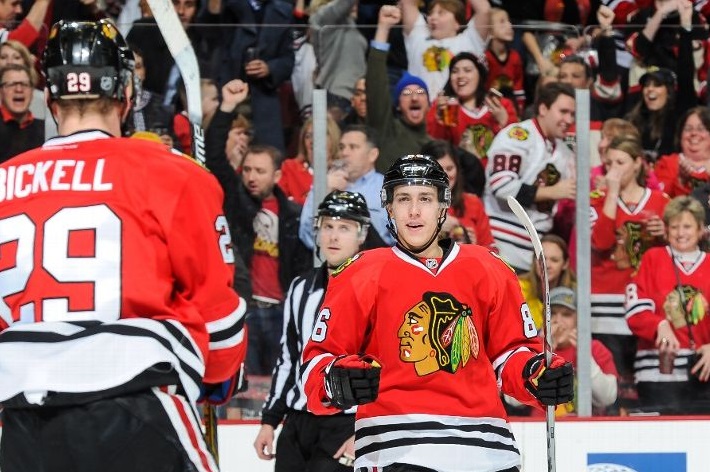 On a night filled with milestones, the Chicago Blackhawks broke out of a two-game home losing streak with authority and hammered the visiting Arizona Coyotes.

After struggles to score, especially with a man advantage, the Hawks got on the board early. Jonathan Toews got the party started with a power play goal at 6:53, but it wouldn’t hold-up as the game-winner unfortunately.

At 12:48 into the first, the line of Teravainen, Bryan Bickell and Andrew Shaw made their first impact of the game. Bickell made a nice play to get the pick to Teravainen, who made a great pass to Shaw who had positioned himself right in front of Mike Smith. Shaw was able to settle the puck down and get it past Smith for his first goal in eight games – and of the new calendar year.

Chicago out-shot Arizona 20-9 in the first period and did a much better job connecting on passes that had eluded them in the previous few games. The second period would be more of the same.

Less than four minutes into the second, Kane put a rebound home for his 22nd of the season. The benchmark goal was his second point of the night; he also assisted on Toews’ goal in the first. Patrick Sharp picked up his second assist of the night on Kane’s goal.

Teravainen picked up his second goal o the season and second point of the evening less than six minutes later to extend the lead to four.

Sadly, Antti Raanta wouldn’t get a shutout as Lucas Lessio scored the first goal of his NHL career at 17:54 into the period. Michal Rozsival got greedy and pinched on the play, opening the door for a breakaway. Arizona defenseman Keith Yandle picked up the 300th point of his career on the goal.

The excitement for Lessio and his teammates lasted only 85 seconds, as Duncan Keith made a nice play and found Shaw for his second of the night and eighth of the season. Shaw had scored twice since Nov. 28 – a stretch of 23 games – before facing the goaltender who cost him a few postseason games a couple years ago.

With the game in-hand, the Hawks put some pressure on Smith in the third but not much. David Rundblad did troll his former team by scoring late in the third to push the score to 6-1, with Kane picking up his third point of the night with the primary assist.

Bickell, Sharp and Brad Richards had two assists each in the game. Shaw led the way with eight shots on net, while Rozsival had a team-high two blocked shots and Brent Seabrook had a team-leading three hits. And Toews won 13 of 20 faceoffs on the night.

Raanta made 35 saves in the victory to stay perfect at home this season. Smith allowed six goals against 51 shots in defeat.

Chicago finished up the pre-All-Star break schedule in Pittsburgh on Wednesday night.