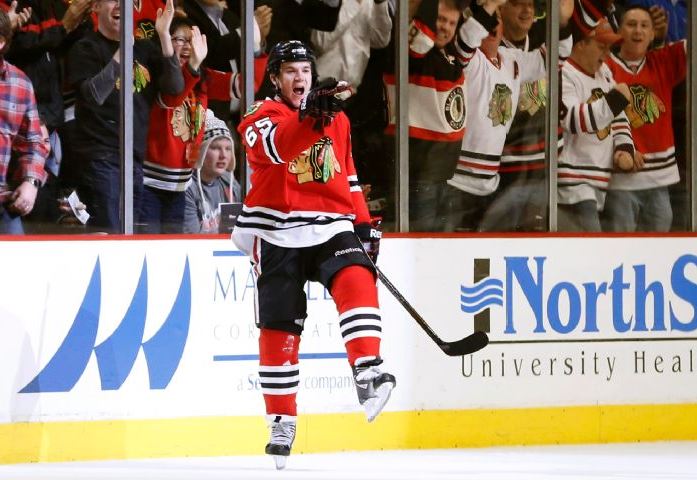 With questions about their offensive consistency creeping up after a quiet trade deadline, the Blackhawks answered the bell with a dominant win over the visiting Blue Jackets on Thursday night.

Andrew Shaw scored twice and Brandon Saad made a highlight reel move through the Columbus defense to set up Jonathan Toews for an easy goal as the Hawks piled it on in a big second period.

Shaw and Saad skated with Toews as coach Joel Quenneville mixed up his lines to spark the offense after a disappointing performance against Colorado. Patrick Sharp skated with Patrick Kane and Michal Handzus and Peter Regin found himself with Bryan Bickell and Kris Versteeg.

Quenneville’s lines worked, as three of the four lines contributed goals in the first 40 minutes and the Hawks were up 5-1 after two periods.

Sergei Bobrovsky, the reigning Vezina Trophy winner, lasted only 32:29 and faced only 18 shots in the loss, allowing four Blackhawks goals.

Brandon Bollig started the scoring, tipping a Marcus Kruger shot past Bobrovsky for his seventh goal of the season. After Ryan Johansen tied the game, Shaw received a great pass from Sheldon Brookbank on a breakaway and flipped the puck into the back of the net.

The Hawks added three goals in 10 minutes in the second period to blow the game wide open. Saad wandered through the Columbus “defense” and set up Toews for one of the easiest goals he’s scored this year to increase the lead to 3-1. The play was started by a huge hit Shaw put on Nathan Horton.

Just over four minutes later, Kris Versteeg put a hard shot wide and Bobrovsky obliged him by directing a rebound right to a streaking Bryan Bickell. Bickell reached double digits with his tenth goal of the season; it also ended the night for Bobrovsky.

The onslaught continued as Shaw tipped a Brent Seabrook shot past Curtis McElhinney. Shaw’s goals came at 16:44 in the first and 17:44 in the second, and broke a terrible personal drought. Shaw had only scored three goals since the calendar rolled over to 2014, and hadn’t scored since January 22nd in Detroit. Thursday was Shaw’s third multi-goal game of the season. Toews added his second goal of the night, another easy deposit for Chicago’s captain off a great pass from Kane on a power play. The goal was Toews’ 24th of the season.

Seabrook and Marcus Kruger had two assists each as 13 different Blackhawks had a point in the victory. Corey Crawford stopped 22 of 23 shots, and the Hawks successfully killed all four Columbus power plays.

Chicago has outscored their four opponents 14-8 since returning from the Olympics, with four of the eight goals being scored by Colorado on Tuesday evening. The Hawks have killed 13 of 14 penalties over those four games as well.

Also on Thursday night, the Blues won 2-1 in Nashville to stay ahead of the Blackhawks. Colorado defeated Detroit 3-2 in overtime.