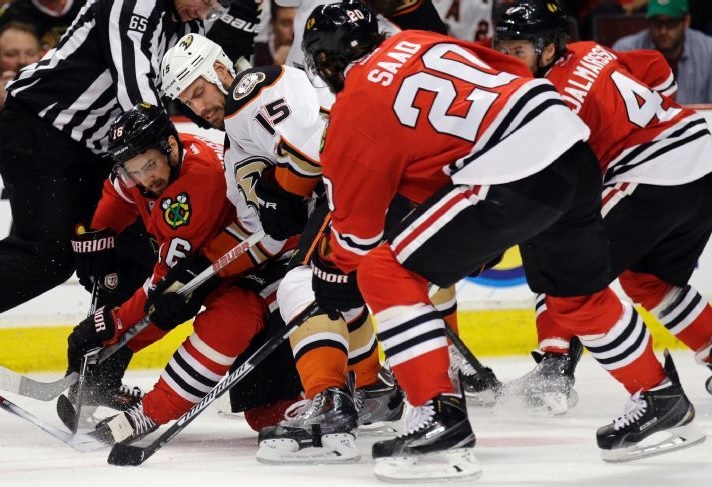 Once again, it took a marathon effort for the Blackhawks to beat the Ducks. This time, at the United Center, Chicago had to overcome a 37-second disaster in the third period to win in a second overtime.

The hero was Antoine Vermette, who returned to the lineup after he was a healthy scratch for Game Three. With “fresh legs,” Vermette returned to win 14 of 20 faceoffs in 17:56 and scored the game-winning goal at 5:37 into the fifth period.

The other healthy scratch in Game Three was Teuvo Teravainen, who almost ended the game in the first overtime. He won the puck and found Patrick Sharp streaking up the ice for a breakaway that Frederik Andersen was able to stop and control in front of the net. Chicago’s reunited third line of Vermette, Sharp and Teravainen was once again a difference maker, this time contributing the ultimate tally.

While the finish was exhilarating, the third period left Hawks fans gasping for air.

Chicago dominated the first period, arguably their best 20 minutes of the series. They out-shot the Ducks 14-6 and were able to successfully kill two minor penalties, the second of which brought the United Center to its feet when Brandon Saad opened the scoring with a short-handed goal.

Saad was shot out of a cannon the play, exploding past Ryan Kesler and his shot was true. He got an assist from an official, who bumped into a would-be defender on the play and opened the door for Saad to take off up the ice.

In the second period, tired legs cost the Blackhawks the lead. Niklas Hjalmarsson failed to clear the zone and a Kyle Palmieri shot was tipped past Crawford by Emerson Etem. It was Etem’s third goal of the playoffs, and took the wind out of the United Center.

The shots were 20-17 in favor of the Blackhawks through 40 minutes, and the goaltenders were playing well in a defensive battle.

Then the third period happened.

Jonathan Toews was able to break away from Kesler’s harassment and patiently waited for Andersen to leave the top of the net open for a go-ahead goal. Toews made his shot count to give Chicago a 2-1 lead.

Exactly five minutes later, Brent Seabrook joined the rush at and culminated a dominating shift by Toews, Saad and Marian Hossa with his fourth of the postseason. The 3-1 lead had the building on its feet and the momentum was squarely behind the Blackhawks.

Kesler came back and scored 1:04 later to cut the lead in half, and the Ducks added two more goals in the 36 seconds that followed to grab a 4-3 lead and crush the crowd. Matt Beleskey scored 22 seconds after Kesler, using Kimmo Timonen as a screen to get a shot past Crawford.

Coach Joel Quenneville used his timeout with the score tied in an effort to get some composure on his bench, but the Ducks were having nothing of it. Corey Perry was able to get a rebound just past Crawford’s leg to give Anaheim the lead only 14 seconds after the timeout ended.

The three goals in 37 seconds was the second-fastest three-goal outburst in postseason history. And the Blackhawks desperately needed anything to work.

Thankfully, Jakob Silfverberg obliged with a holding penalty that gave the Hawks a chance. And they made it matter.

Patrick Kane banked a shot off the inside of Andersen’s leg and into the net to tie the game, and there was hope.

Crawford nearly cost the Hawks the game at the end of regulation, opting to whack Beleskey as he skated by and a high, hard shot almost beat him. With five goals scored in 5:01, cardiac wards all over Chicago were getting prepped for the first overtime.

In the first overtime, Crawford made 17 saves to keep his teammates in the game and we once again went to a second overtime in the series. And for the fourth time in these playoffs, the Hawks were able to score the game’s final goal in extra time.

Duncan Keith led the Hawks with seven shots on net and was incredibly active. He also led the team in ice time again, skating 40:39 in the victory. He also blocked one shot and was credited with two hits and three takeaways in a magnificent game.

Sharp and Andrew Shaw led a more physical Blackhawks effort with nine hits each, and Shaw nearly ended the game in the first overtime when a shot hit the crossbar.

Saad led Chicago with three points, adding two assists to his short-handed goal. Toews, who won 20 of 31 faceoffs, was the only other Blackhawks player with a multi-point evening (one goal, one assist).

Crawford finished the night with 47 saves against 51 shots, and while his play in the late stages of the third period wasn’t ideal he earned his money in the first overtime period.

The two teams will face another short turnaround, going back to work on Monday night in Anaheim with the series tied.