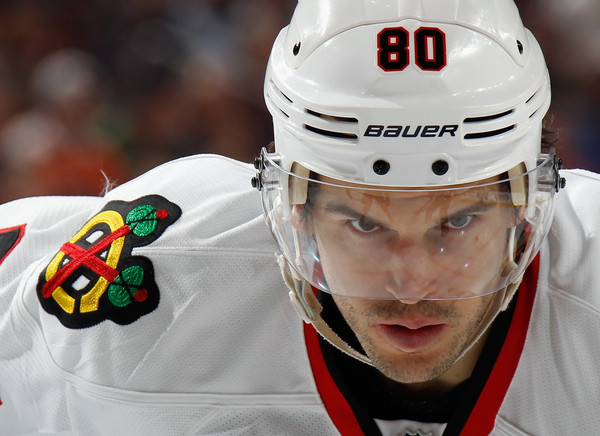 To say Antoine Vermette’s play was underwhelming after he was acquired at the trade deadline is being modest.

The veteran center, who averaged 18:59 per night and had 35 points in 63 games for a bad Arizona team, had only three assists in 19 games with the Blackhawks before the end of the regular season. He saw his ice time cut back and his role diminish with each week, finishing with an average ice time total of barely 14 minutes in an Indian head sweater. He won only 50 percent of his faceoffs, and struggled for stretches at the dot that failed the (perhaps unfairly) lofty expectations that met him upon arriving in Chicago.

When coach Joel Quenneville made him a healthy scratch in the first two games of the playoffs, fans were calling for the heads of the player, coach and General Manager Stan Bowman for giving up a first round pick to acquire a needed piece in the wake of Patrick Kane’s injury.

However, since returning to the lineup, Hawks fans are now seeing the player who was worthy of the steep price paid by the organization. And consistency in his linemates has translated into increased production, and quality of play, from Vermette.

Skating on the Hawks’ third line between Patrick Sharp and, now, Teuvo Teravainen, Vermette has looked more comfortable. He has been dominant at the dot in the postseason, winning 63.5 percent of his faceoffs, and has developed some nice chemistry with Sharp and Teravainen. He has one goal and one assist in six games, but his plus-five rating is a stark contrast from the minus-25 he posted during the regular season. Also, Vermette has the highest 5-on-5 PDO on the Hawks roster (111.11).

With Sharp (four goals, four assists) and Teravainen (one goal, two assists in only four games), the Hawks third line has combined for 13 points in these playoffs and have been flying since they were put together in the Game One of the second round. The trio has combined for six points in the first two games of the series, and Vermette is proving to be precisely what the Hawks hoped to add when they made the deal with Arizona.