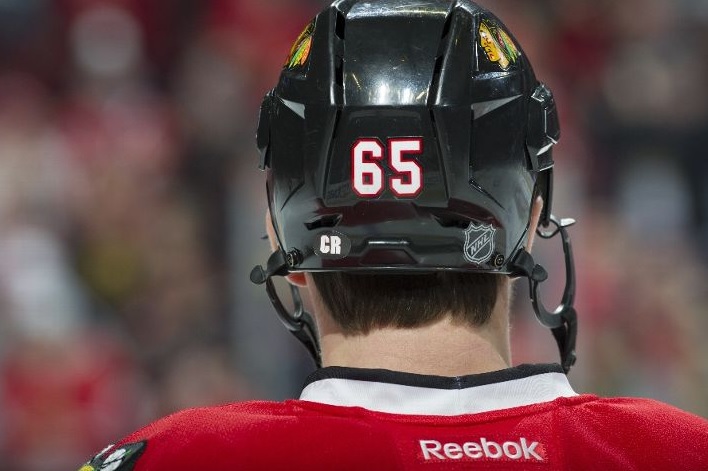 On a tough, emotional night for the Blackhawks at the United Center, the team responded to terrible news with a strong team performance and shutout the Toronto Maple Leafs. Antti Raanta made 31 saves to post his second shutout of the season. Toronto put 14 shots on net in the third, but Raanta made saves on every one of them to preserve the doughnut on the scoreboard.

Chicago got on the board in the first period as David Rundblad scored his first goal with the Indian head on his sweater. In what would become a familiar refrain on Sunday night, Patrick Kane and Patrick Sharp were credited with assists on the goal.

Sharp opened the game on the second line with Kane and Kris Versteeg in the place of Brad Richards, who was scratched with an upper-body injury. Richards is listed as day-to-day, but the second line continued rolling in his absence.

In the closing seconds of the first, Kane led a rush and dropped the puck to Versteeg. Versteeg kicked the puck to his stick and shot it past James Reimer with 0.4 seconds showing on the clock. Sharp picked up the second assist on this goal as well.

For Versteeg, his ninth goal continues a career renaissance. The forward had only 12 goals in 81 injury-plagued games combined between the Panthers and Blackhawks last year. He now has nine goals in 30 games to start this season.

Both teams failed to score in the second period, but emotions flared when Roman Polak (who is still a turd) drove Kane into the boards from behind. Polak was only called for a two-minute boarding minor penalty on the play, and Kane was fine. But that doesn’t change the fact that Polak remains a turd.

In the third, the Hawks killed a Versteeg penalty and then went on the power play as David Clarkson went to the box after interfering with Johnny Oduya. Only 21 seconds into the advantage, Kane put the Hawks up 3-0 with his team-leading 16th goal of the season. And, once again, Sharp picked up an assist.

Jonathan Toews finished the scoring with his 13th of the season only 2:15 later. For a fun change of pace, the assists on this goal went to Brent Seabrook and Duncan Keith.

The second line dominated the night. Versteeg (one goal), Kane (one goal, two assists) and Sharp (three assists) combined for seven points in the game as the Hawks ran away from the league’s top scoring squad.

In the second night of a back-to-back with travel in between, coach Joel Quenneville spread out the ice time evenly in the emotional game. Toews only skated 15:42 but won 11 of 18 faceoffs. Versteeg, the designated center on the second line, won only one of six faceoffs in the game, but Marcus Kruger, Ben Smith, Andrew Shaw and Sharp combined to have a strong night at the dot; Chicago won 31 of 58 draws in the game.

The Hawks will return to their home ice on Tuesday night when the Winnipeg Jets visit.