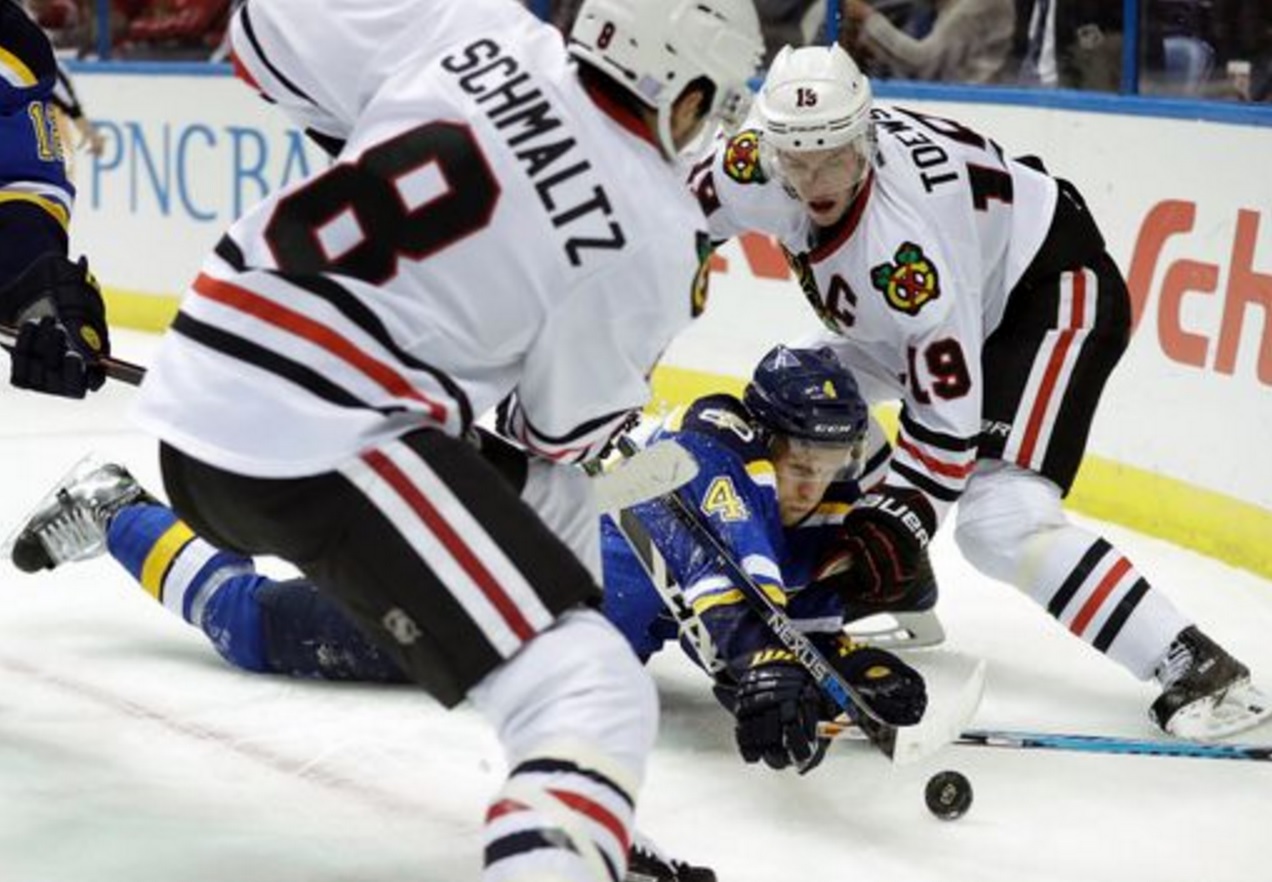 After allowing five goals to the Blues on United Center ice to open the 2016-17 regular season, the Blackhawks visited St. Louis for the first time on Wednesday night with a much improved defensive effort.

In the opening 40 minutes, Chicago killed two penalties successfully and Corey Crawford stopped all 16 shots he faced. Through 40 minutes, only one shot had beaten either goaltender – and it was Marian Hossa staying hot for the Hawks.

The goal was Hossa’s seventh of the season already and gave the visitors a 1-0 lead.

Unfortunately, the second period didn’t end without some adversity for the Blackhawks. Artem Anisimov, one of the hottest offensive players in the entire NHL, went to the room at 15 minutes into the second period and did not return to action.

With Anisimov out, Marcus Kruger and Nick Schmaltz saw chances to center the line with Hossa and Artemi Panarin.

Neither side had much going until Jonathan Toews went to the box for tripping at 9:19 into the third. The two minutes that followed was some of Crawford’s best work of the year, stopping a number of great chances including an incredible save on what appeared to be a wide open cage for Hawks-killer Vladimir Tarasenko.

The Hawks killed the penalty and quickly received a power play of their own moments later. This time, Jake Allen was fantastic for the Blues and the Blackhawks weren’t able to extend their lead.

Less than ten seconds after their first advantage of the third period ended, Panarin dropped the gloves with Scottie Upshall. Panarin handled his own business impressively, but went to the box in a one-goal game for five minutes with only 5:52 left in regulation.

Chicago got another power play 37 seconds after the fight, but were without both Panarin and Anisimov while maintaining the slimmest of margins. Another power play ended without any change in the score, but now the Blues had less than three minutes left in regulation to match the Blackhawks’ goal.

St. Louis would beat Crawford with 2:11 left on a big shot from Alex Pietrangelo. Jori Lehtera made contact with Crawford in front of the crease as the shot was being unloaded and coach Joel Quenneville challenged the play, but video review upheld the scoring play.

So without Panarin or Anisimov and with two minutes left in regulation, the game was now tied.

Pietrangelo tied the game, but shot a puck out of play to give the Blackhawks another power play late in the third period. St. Louis killed 1:36 of the power play to finish regulation, and the two teams headed to overtime with Chicago carrying 24 seconds of an advantage over into the extra session.

Through 60 minutes, Crawford had made 27 saves; Allen had stopped 28. Both goaltenders were fantastic.

Panarin exited the box when regulation came to a close and was able to join the power play to open overtime. Chicago wasn’t able to score in the 24 seconds of power play time…. but Panarin sniped the game-winning goal one second later to earn the Blackhawks the important second point in the standings.

The goal is Panarin’s sixth of the year.

Panarin picked up his first career Gordie Howe hat trick and finished tied with Kane for the team lead with six shots on net in exactly 17 minutes of ice time.

Brent Seabrook led Chicago with three blocked shots and picked up an assist on the game-winning goal. Kane also had an assist on the GWG and led all Hawks forwards with 25:45 on the ice. Toews won only eight of 18 faceoffs but Kruger won seven of 10 as Quenneville had to juggle his centers in the absence of Anisimov. Dennis Rasmussen won five of 10 at the dot and led the Hawks with two hits.

Because his night was cut short because of injury, Anisimov’s 11-game point streak came to an end on Wednesday night.

Without Tyler Motte for the next three weeks and now not knowing the availability of Anisimov, the Blackhawks will put a seven-game win streak on the line when they host Alex Ovechkin and the Washington Capitals on Friday night.