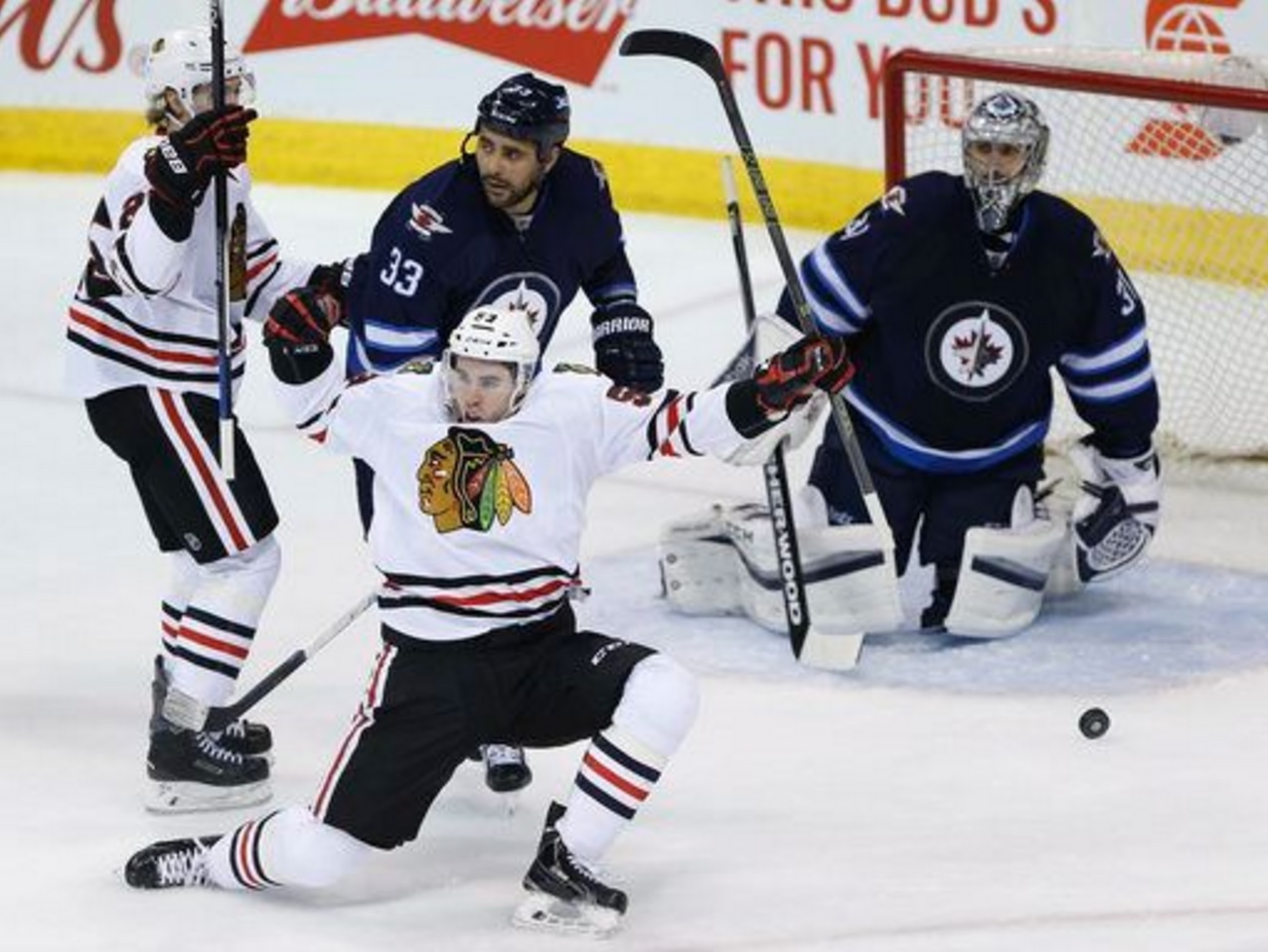 Where do we begin?

Before Friday’s game began, Duncan Keith was suspended for six games. And Marian Hossa wasn’t even with the team because of an illness.

Then the game started.

First, Andrew Shaw was helped to the bench with an apparent lower-body injury.

Then Trevor van Riemsdyk got run over by Blake Wheeler and needed help to the room.

Then a clearing attempt from Niklas Hjalmarsson hit Jonathan Toews in the head. And he went to the room.

Shaw didn’t return, but TvR and Toews did.

And Artemi Panarin’s offense, which had been absent for the better part of a month, also returned – in a big way.

Panarin lit up the scoreboard for four points (two goals, two assists) and had the primary assist on Brent Seabrook’s overtime game-winner as the Hawks somehow escaped Winnipeg with a 5-4 win.

Winnipeg got on the board first when Nic Petan scored the second goal of his career. But the Hawks would put two on the board in the final 5:21 of the first to take a 2-1 lead to the first intermission. Panarin scored a power play goal, and Brandon Mashinter returned from six consecutive healthy scratches to score his fourth of the year.

The Jets tied the game when Wheeler scored his 21st of the season at 12:08 into the second. But Patrick Kane – wearing an “A” because of Keith’s suspension and Hossa’s illness – gave Chicago the lead once again with his career-best 40th goal of the year.

In the third, Winnipeg would storm back again against the handcuffed Hawks. Dustin Byfuglien tied the game and Wheeler gave the Jets a 4-3 lead at 11:39 into the final frame. But the Hawks wouldn’t go away.

Panarin scored his second of the night and 27th of the season at 15:15 into the third to tie the game at four.

Regulation would end with the score knotted at fours.

Only 62 seconds into free hockey, Panarin fed Seabrook for the game-winner.

The win showed a level of grit and determination fans have been begging to see from the Hawks for weeks.

Erik Gustafsson played a strong game, saving at least one goal and picking up two assists in 11:57 on the night. Seabrook also had a multi-point night from the blue line (goal, assist) and, somehow, Hjalmarsson skated almost 27 minutes without a single blocked shot. TvR led Chicago with four blocked shots; he skated 21:19 and was minus-three even with the ice time missed because of injury. Michal Rozsival also blocked four shots.

Four Blackhawks were credited with a team-high of two hits, and they were the players one would assume were leading the way in a physical game: Toews, Marcus Kruger, Dale Weise and Teuvo Teravainen.

Kruger set up Panarin for the beautiful game-tying goal in the third and won seven of 13 faceoffs in 15:20 as he continues to work his way back into the flow.

With Kruger back, the Hawks penalty kill looked better once again. Chicago was perfect against three short-handed situations on Friday night.

Scott Darling stopped 28 of 32 in the win, but was able to withstand 25 shots over the opening 40 minutes while teammates were dropping like flies around him. Before the game, coach Joel Quenneville said Corey Crawford might skate this weekend.

Shaw is reportedly day-to-day with an upper-body injury.

Artem Anisimov returned from a lower-body issue to skate 14:57. He won five of 13 at the dot and was credited with one assist and one blocked shot.