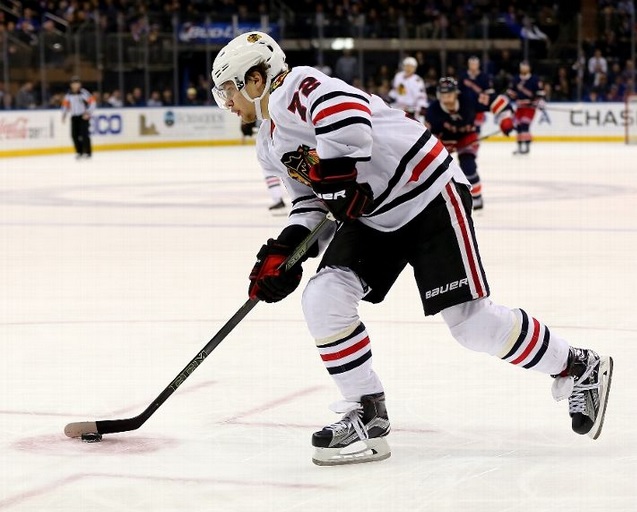 For seven minutes on Wednesday night, poor Vince Hinostroza was wondering if a couple penalties had cost his team in the worst way possible.

Heading to the third period, the Blackhawks held a 2-1 lead. Teuvo Teravainen set up Andrew Desjardins with a beautiful pass to open the scoring 3:30 into the first.

Artemi Panarin extended the lead with a power play goal 10:05 into the second. Panarin’s first goal of the night made him the first undrafted rookie in Blackhawks history to score 20 in a season. He also became the first rookie in the league to hit the benchmark this year.

But he wasn’t done.

A goal from Kevin Hayes at 13:45 into the second cut the lead in half but Corey Crawford held the Hawks in the game through 40 minutes. New York out-shot the Hawks 19-13 through two periods, but their best opportunity came in the closing moments of the second when Hinostroza was called for a double-minor for high sticking Dominic Moore.

Those two power plays carried over into the third period and, on fresh ice, the Rangers immediately made the Hawks pay. Twice.

Derick Brassard tied the game 24 seconds into the third and Dan Boyle gave New York a 3-2 lead at 2:17 while a dejected Hinostroza watched from the penalty box. The Rangers held onto that lead for 7:30 until the Blackhawks attacked.

Teravainen, who had perhaps his strongest game of the calendar year, made a pretty pass to Andrew Shaw to tie the game on another Hawks power play. He skated 18:03 and led the Hawks with four shots on net with his two assists; he also blocked two shots and spent time on both special teams units.

Keith Yandle went to the box with 3:30 left in regulation and Panarin went back to work.

Panarin scored his second of the night 30 seconds into the advantage for Chicago’s third power play goal of the game. The eventual game-winner came off a gorgeous pass from Patrick Kane from behind the net that slipped through Artem Anisimov and right to Panarin’s stick in front of the net.

With 71 seconds left in regulation, Panarin scored into an empty net to complete his first career hat trick. Yandle tripped him after the shot was released, a dangerous play that could have injured Panarin, but the Hawks Calder candidate got up OK on the play. He was all smiles with a big time performance on a national stage at Madison Square Garden.

Crawford finished the night with 31 saves against 34 shots, nearly double the number of shots Henrik Lundqvist faced on the other end of the ice (four goals allowed against 19 shots).

Chicago finished with three power play goals on four advantages. Perhaps most impressive in the five-goal outburst was the offensive distribution; the only Chicago skaters with a multi-point night were Teravainen and Panarin. Trevor van Riemsdyk was the only Chicago defenseman to not pick up an assist, but he blocked two shots and was credited with one hit in 18 minutes of action. Brent Seabrook led the Hawks with three hits and finished tied with Niklas Hjalmarsson for the team lead with three blocked shots in the victory.

Not everything from the Hawks’ blue line was ideal, however. Erik Gustafsson returned to the lineup, and he struggled with Michal Rozsival on a number of occasions.

The Blackhawks will visit the White House before their next game, which is outdoors against the Wild in the Stadium Series game on Sunday.