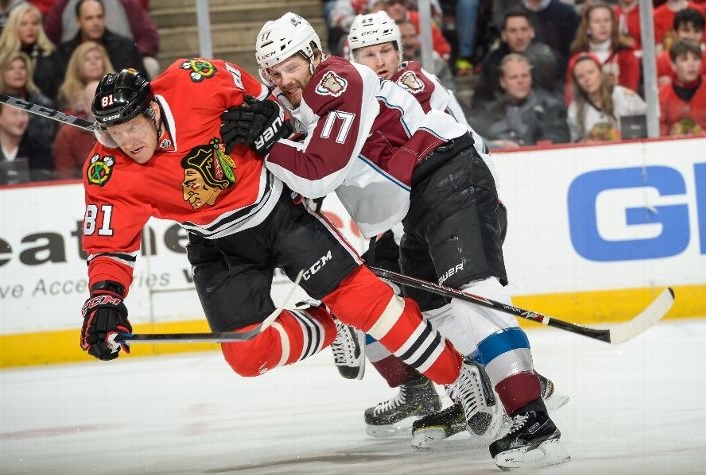 A 5-on-3 advantage in the third period opened the door for the visiting Colorado Avalanche to break a tie game, and the following minutes would blow the Blackhawks away. Through the first 40 minutes the Blackhawks trend of starting slowly but coming on in the middle frame held up once again. Tyson Barrie, who has absolutely killed the Hawks over the last couple years, gave Colorado a 1-0 lead in the first period, but Kris Versteeg tied the game in the second (after losing part of a front tooth on his prior shift).

Unfortunately, the wheels came flying off in the middle of the third period.

At 10:44 into the third, both Patrick Sharp and Niklas Hjalmarsson were called for separate interference penalties, giving the Avs a 5-on-3 for two full minutes. Gabriel Landeskog scored 21 seconds into the two-man advantage, allowing Hjalmarsson out of the box. Barrie scored again 24 seconds later to push the lead to 3-1 and effectively end the night for the Blackhawks.

Brad Stuart scored one of the ugliest goals allowed by Crawford in his NHL career a few minutes later. He just dumped the puck on net and Crawford let it bounce over his stick and into the net. The lazy play gave Colorado a three-goal lead with a little more than five minutes left in regulation.

Crawford made 26 saves in the loss, while Semyon Varlamov extended his dominance of the Hawks with a 27-save win.

For the first time this year, Patrick Kane has been held pointless for three consecutive games. Brad Richards and Michal Rozsival picked up the assists on Versteeg’s goal.

Rookie forward Ryan Hartman skated only 8:31 again, but was credited with three hits and one shot on net. He spent some time on a line with Marcus Kruger and Sharp in the second period.

Sharp started the game on the “fourth line” again, but that again proved to be only cosmetic. He skated 15:26 in the game and was credited with two hits and five shots on net in addition to his two penalty minutes.

Defenseman Kyle Cumiskey skated more than 15 minutes in the game and was credited with a team-high two blocked shots in the game. It wasn’t a good night for the Blackhawks’ defensemen; Duncan Keith turned the puck over a number of times and a Brent Seabrook turnover led directly to Barrie’s goal in the first period. In fact, Rozsival may have had the best night among Hawks defensemen.

The Hawks are back on the United Center ice at 2:30 CT on Sunday as the struggling Boston Bruins come to town.