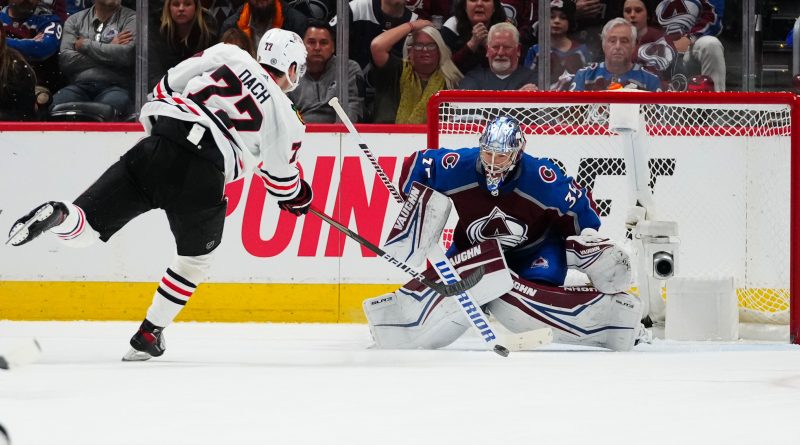 Wednesday was the beginning of a new day in Blackhawks history. The organization turned over a huge part of the roster, leadership changed and hopes were high as the team hit the ice in Denver against the best team in the Western Conference.

Once the game started… um, yeah.

Four minutes in, a Connor Murphy shot from the point went wide and the Avs were off to the races. Jack Johnson streaked up the middle of the ice and… Tyler Johnson collided with Jake McCabe, wiping both players out of any chance at helping defend the net. Johnson went one-on-one with Marc-André Fleury and beat him for the first goal of the season for Colorado.

The Avs continued putting pressure on the Blackhawks. Only 82 seconds after the first Johnson goal, Erik Johnson put a shot on net that was redirected twice, first by Nazem Kadri and then by Gabriel Landeskog. Landeskog’s first of the year made the score 2-0 Colorado.

Less than four minutes later, Landeskog added a second point to his register with an assist on Bowen Byram’s first career NHL goal. Colorado was up three less than half-way through the first period.

And Colliton burned his timeout less than ten minutes into the first game of the season.

Fleury looked frustrated. The passing was all over the place, players were losing an edge far too frequently and the communication didn’t appear to exist.

Chicago got a power play late in the first when Alex DeBrincat was hooked by JT Compher. The first unit looked good in the offensive zone, but after a clear they looked lost. Seth Jones left a drop pass for… presumably Patrick Kane? at the blue line but nobody was home. That almost turned into a breakaway for Colorado but Kane broke up the play.

When the second unit came out they made it count. Dominik Kubalik rifled home his first of the season to cut the lead to two. Ian Mitchell and Philipp Kurashev picked up the assists.

But when the final horn sounded, the Blackhawks were chasing two goals and had been outplayed all over the ice. The shots were 18-8 in favor of the Avs and that felt generous for the Blackhawks.

Jonathan Toews skated 5:20 in the first period and won five of six faceoffs, a solid return to regular-season action after a “full” 2021 season away from the team. Tyler Johnson, in his debut as the top-line center, lost his only faceoff in the first and was minus-two for the period. Riley Stillman and Logan O’Connor mixed it up after the final horn of the period and spent the first two minutes of the third period in their respective penalty boxes.

Seven minutes into the second period, Landeskog went to the box to give the Blackhawks their second power play of the night. Nothing happened on the advantage and Jones was on the ice for the entire two minutes.

Shortly after the Blackhawks’ powerplay expired, the Hawks were short-handed. Murphy was upended about 15 feet away from the puck — which wasn’t called — and the player who hit him, Tyson Jost, ended up with a breakaway the other way that Murphy broke up illegally.

The officials leveled the field with a hooking call on Compher 35 seconds into the Murphy penalty. The Blackhawks actually had some momentum before the blown call on Murphy that turned into a would-be powerplay, so going to 4-on-4 opened up the ice for Chicago to potentially take advantage.

The 4-on-4 lasted less than 60 seconds. Brandon Hagel got mixed up with Cale Makar as he tried to fly up the ice and got caught. For 38 seconds the Avs would have a 4-on-3 advantage.

Toews won the faceoff with Jones and McCabe on the ice and the puck exited the zone. Once the teams were back to 4-on-4, Dach got a breakaway but was stoned by Darcy Kuemper.

All of the penalties in the sequence came and went without either team scoring; the best chance for either side was Dach’s takeaway/breakaway.

Dach kept flying up and down the ice. He had another great opportunity with about five minutes left in the period but Kuemper turned his shot aside. Dach then stole the puck in the neutral zone and attacked, weaving through traffic before the puck eventually found its way to Murphy who unloaded a hard shot that went wide of the net.

The problem with hard shots that fly wide against the Avs is it usually goes the other way quickly, and it did just that. Kadri was credited with his first goal of the season, the fourth of the night for Colorado, as he finished a terrific rush by Byram.

In the closing seconds of the middle frame, Stillman absolutely unloaded on Darren Helm. Helm struggled to finish his shift and get to the room as the horn sounded ending the second period.

After 40 minutes, the Blackhawks were down 4-1. Chicago out-shot Colorado 13-9 in the second but Kuemper was up to the task. Dach had four of the Blackhawks’ 21 shots in the first two periods. Toews won 10 of 16 faceoffs through two periods.

In the “What did Jeremy Colliton do to limit his roster in this game?” category, Mitchell found himself stapled to the end of the bench for most of the second period. Even though he had a powerplay assist in the first period, he had only skated 7:14 through two periods. MacKenzie Entwistle skated only 5:16 through two periods because, you know, why give the kid any chance to earn his spot, develop chemistry or — heaven forbid — get comfortable.

Playing the first game of the regular season in Denver (read: altitude), Colliton had two players on the end of his bench not skating. That wasn’t helping a team that was a mess to begin with.

To open the third period, Henrik Borgstrom was centering Kane and DeBrincat. Entwistle got a shift with Dach and Hagel early in the period. And Tyler Johnson was on the fourth line.

It took almost 16 minutes in the third period for either team to change the score. Murphy blasted home his first goal of the season to cut the lead to two.

With 3:34 left in regulation, Landeskog hammered Dach into the boards. Dach was on his knees when Landeskog initiated the contact and Colorado’s captain drove him into the boards. He was sent to the showers with a boarding penalty and should get a call from the league.

The Blackhawks got a power play; Tyler Johnson was sent off for roughing for having Dach’s back.

The Blackhawks pulled Fleury for an extra attacker while on the power play with three minutes left in regulation.

While on the power play, DeBrincat dumped the puck in and chased it into the corner. He got hit hard into the boards and left the ice immediately favoring his left arm. It looked bad… but he returned to the ice for his next shift. So there was a modest exhale. However, the Blackhawks did not score on the power play with Fleury on the bench.

The final minute rolled off the clock and the Avs skated away with a 4-2 victory. After an ugly first period, the Hawks put more pressure on Colorado. Kuemper was terrific, Dach missed on a couple grade-A scoring chances and the early misses were too much to overcome. Even without Nathan MacKinnon in the lineup for the Avs.

Toews finished the night skating 17:15 and won 16 of 24 faceoffs. Dach skated 18:59 and won three of five faceoffs. He led all Hawks skaters with five shots on net; unfortunately, two of those were desperately needed goals that he needs to finish in the future.

Borgstrom had a nice night. He won half of his eight faceoffs and blocked two shots with one assist in 13:25.

Mitchell finished the night with one assist and one shot on net in 8:23. His assist came in his 16 seconds of power play time in the first period. But, you know, Colliton is the coach who’s here to help develop the next generation of whatever bullshit the font office is going to tell us about him being the head coach still.

Jones had a long night. He blocked four shots and put four shots of his own on net in 28:19 on the ice but the Avs’ speed gave him and the rest of the Hawks’ new-look blue line fits. The communication needs to improve and there needs to be a system in place… of course, these are things we’ve been saying since Joel Quenneville got fired.

This was only the first game of 82. The good news is Jonathan Toews is back and looked like the Jonathan Toews who led the Blackhawks for a decade. The silver lining in the loss was the reality that this Colorado team is going to run a lot of teams — especially in the Western Conference — out of the barn this season. But there’s a lot of improvement the Hawks need to make to get into the playoff picture this season.

49 thoughts on “Avs Bury Blackhawks Early, Skate Away With Game One Win”