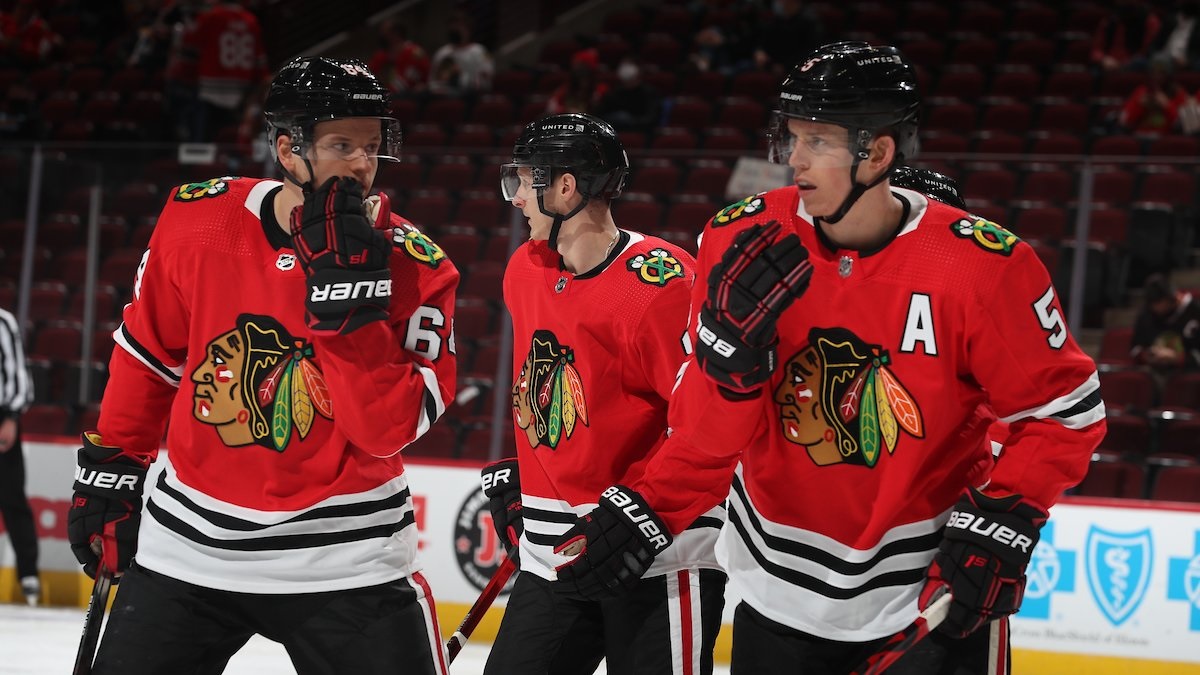 For the first time in 14 months, there were paying fans in the seats at the United Center on Sunday night. More than 3,000 happy humans were able to take part in the penultimate game of the 2021 Blackhawks season. And the organization welcomed fans back in the building with a stirring video narrated by Brent Seabrook and Andrew Shaw.

The Blackhawks were playing for pride and the chance to make a final impression on the coaching staff and front office on Sunday evening. Thanks to Nashville clinching the final playoff berth in the division on Saturday, the same was true of the Dallas Stars.

So Jeremy Colliton loaded up his lineup with rookies. Ten first year players were in the lineup for Chicago; Duncan Keith and Dylan Strome were among those who were not dressed. Kevin Lankinen was back between the pipes and Colliton rolled with seven defensemen.

The first goal of the game was the first of MacKenzie Entwistle’s career. Mike Hardman was credited with a helper on the goal.

Patrick Kane picked up his 50th assist of the season.

Three minutes later, Denis Gurianov tied the game for Dallas. While Chicago wasn’t getting as many shots on net, they were making them matter.

Brandon Hagel scored his ninth of the season 51 seconds after the Gurianov goal to give the Blackhawks a 2-1 lead.

Philipp Kurashev and Dominik Kubalik picked up the assists on Hagel’s goal.

With 96 seconds left in the period, Alex DeBrincat sniped home a power play goal to extend Chicago’s lead to 3-1.

Kane and Hagel picked up the helpers on DeBrincat’s 30th of the season.

Alex DeBrincat scored his team-leading 30th goal of the season and has now found the back of the net at least once in each of the @NHLBlackhawks’ last six games. #NHLStats pic.twitter.com/NHtYaxM58N

When the dust settled at the end of one period, the Stars had a 17-9 shot advantage but the Blackhawks had a two-goal advantage on the scoreboard. Lankinen was good but the youngsters came to play. Four of the Hawks’ rookies — Hagel (two), Kurashev, Hardman and Entwistle — had points in the opening 20 minutes. Kane had two assists in the period as well.

The Hawks were out-shot 10-5 in the second period but Lankinen kept Dallas off the board. Chicago took the same two-goal lead to the third.

Getting out-shot by a 2-1 ratio isn’t a good way to hang onto any lead, and it didn’t take long for Dallas to cut the lead in half once the third period began. Mark Pysyk scored 2:16 into the final period to make the lead just one.

With 3:11 left in regulation, DeBrincat added his 31st goal. He has 11 goals in his last 14 starts and a seven-game point streak, pushing himself to third place in the NHL in goals behind Auston Matthews and Connor McDavid.

Pius Suter picked up an assist on DeBrincat’s second of the night.

Dallas pulled the goalie with two minutes left in the game chasing two but it didn’t matter. The Hawks handled their business and took two points to the room with fans in the stands to applaud the final horn.

Let’s break down the rookie performances for the Blackhawks on Mother’s Day: