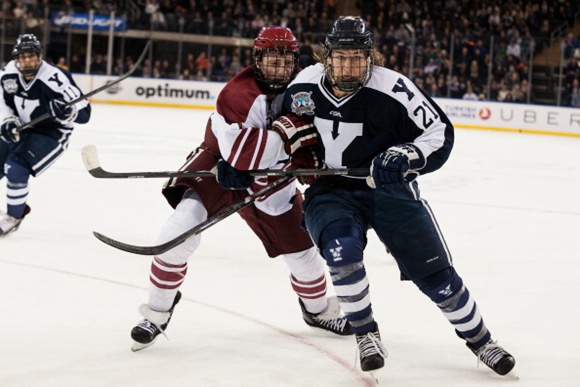 Since Stan Bowman took over as general manager of the Blackhawks, the organization has consistently drafted players headed to play college hockey in the United States. From the first round pick in 2010 – Kevin Hayes – to the most recent class of picks, the Hawks have had a few NCAA-bound players among their selections each year.

With some recent cap casualties opening up roster spots, college players will be a focus heading into training camp this year as well. Nick Schmaltz, Luke Johnson and Tyler Motte will join recent college players Vince Hinostroza, Tanner Kero and Kyle Baun in the battle for NHL ice time. And the rumors about the Hawks’ interest in Jimmy Vesey remain as well.

But even with those prominent names in the organization, there are other headed back to campus for the fall. Here’s a look at the 14 Hawks’ prospects who will be playing college hockey again this year. 20 thoughts on “Back To School: Blackhawks Prospects Headed To College”