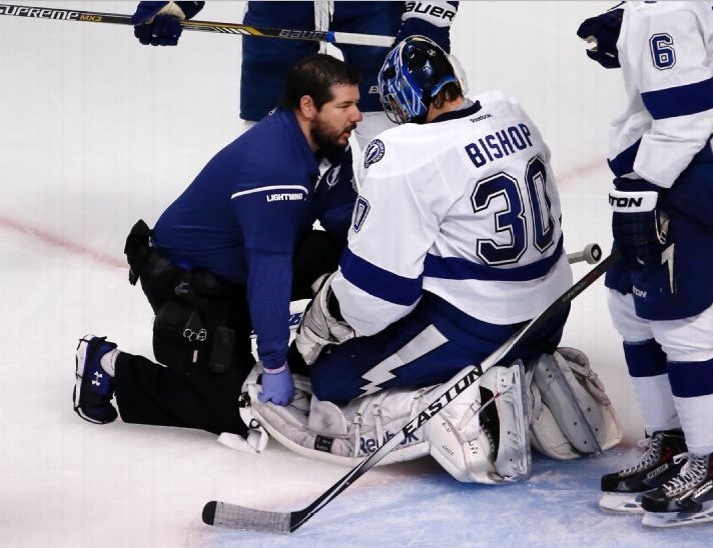 Ben Bishop returned to the net – and stayed there for the entire game – in spite of an apparent issue, but the Blackhawks weren’t able to capitalize. A 3-2 loss in Game Three gives home ice advantage back to the Lightning, and makes Game Four on Wednesday night a must win for Chicago.

The Hawks got off to a first period start they wanted, but failed to capitalize on a number of great chances. Chicago out-shot Tampa 19-7 in the opening 20 minutes, but Bishop was able to make 18 saves while clearly laboring. Ryan Callahan gave the Lightning a lead 5:09 into the game, but after the goal the Blackhawks dominated the rest of the period.

Braydon Coburn took two penalties in the first period, the first of which was offset by a cross-checking call on Brandon Saad. Coburn tripped Marian Hossa as he drove to the net, and the Hawks veteran forward managed to get a great shot on net that barely missed – an unfortunate theme for the Hawks on Monday night.

The second Coburn penalty, however, opened the door for the Blackhawks to take advantage of Bishop and Brad Richards scored his third of the postseason to tie the game. Bishop got a glove on Richards’ shot, but wasn’t able to stop it.

The momentum shifted in the second, as Tampa out-shot the Hawks 17-7 in the middle stanza. Corey Crawford made a number of huge saves in the second, including against a Nikita Kucherov breakaway as he left the penalty box.

Kucherov went to the box for tripping Johnny Oduya, and he was clearly not right after the play. He appeared injured and frustrated on the bench after the play, and didn’t appear again until the third period.

Chicago had to kill off an extended 5-on-3 during the second as well. Bryan Bickell, who returned to the lineup after two games off because of vertigo, went to the box for roughing at 15:18 and Saad joined him 34 seconds later. Without Oduya, the Hawks were able to do a magnificent job of killing the penalty, and there was a sense in the United Center that Chicago would carry some momentum from their special teams to the third.

Four minutes into the third period, the Hawks top line of Saad, Hossa and Jonathan Toews took control. Slick passing from Duncan Keith to Hossa to Saad ended with the puck in the back of the net and Chicago took a 2-1 lead.

A lead that last 13 seconds.

Immediately after the faceoff, Tampa attacked and Ondrej Palat pushed a loose puck past Crawford to tie the game.

After the Palat goal, both teams pushed but the goaltenders were big on both ends. With less than four minutes left, Victor Hedman carried the puck into the Hawks zone and threw a pass to the front of the net. Kyle Cumiskey failed to put a body on Cedric Paquette, who put an easy shot between Cumiskey’s legs and into an open net.

Crawford was pulled late, but the Hawks weren’t able to take advantage of Bishop and score an equalizing goal. Hossa was the best played on the ice for Chicago, skating 23:56 with two assists, three hits and two takeaways. Toews won 18 of 25 faceoffs in 21:08 and Saad finished with a team-high six shots on net and three hits with his seventh goal of the playoffs.

Bickell and Antoine Vermette finished tied for the team lead with four hits, but Bickell still didn’t look right on the ice. He was limited to 9:53 in the game; coach Joel Quenneville relied heavily on his snipers late, shifting Teuvo Teravainen and Saad with Patrick Kane at times as he tried to find a combination that could produce a goal.

Trevor van Riemsdyk made his postseason debut and performed admirably in the second and third periods while Oduya was dealing with his issues. He skated only 9:01 in the game, but may play a more critical role moving forward. After the game, Quenneville said they would need to see how Oduya looked on Tuesday before committing to him moving forward in the series; Oduya played just 16:47 in the loss.

Crawford finished the night with 29 saves against 32 shots, while Bishop made 36 saves against 38 shots while clearly favoring his left leg/side. Bishop’s physical issues make the Hawks’ inability to finish – at home – harder to stomach.

Home ice advantage is gone as Chicago dropped a crucial home game. Wednesday night is now the biggest game of the year for the Blackhawks, who will look to tie up the series at home.