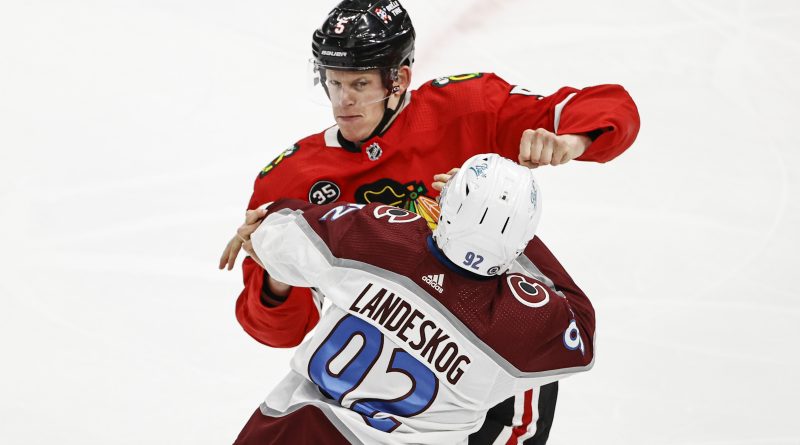 The Colorado Avalanche visited the United Center for the first time this season on Tuesday night, a game you could have only watched on either ESPN+ or Hulu. Marc-André Fleury made his first start since landing on the COVID list during the holiday/COVID shutdown against a team that was absolutely rolling before the league took a break.

The Avs started the season with a long list of injuries, including a few to significant players. After a 4-5-1 start, Colorado rolled off a 13-3-1 record before Christmas. They beat Anaheim 4-2 in their first game back after the break on Sunday.

On the other end of the ice, the Blackhawks have lost their first two games of the new calendar year in ugly fashion.

In what-took-so-long news, Erik Gustafsson was a scratch. Hopefully he does that more frequently the rest of the season.

The game opened up with Connor Murphy finding his way to Gabriel Landeskog and the gloves dropped; Murphy clearly remembered a questionable hit Landeskog had on Kirby Dach in a previous meeting.

After the fight, the first period went sideways for Chicago. Two penalty kills were made less impressive by two goals from Erik Johnson and Alex Newhook. Indeed, if not for a few incredible saves from Fleury, the Blackhawks could/should have been chasing more than two after 20 minutes. Colorado out-shot the Hawks 14-5 in the first period.

With the exception of an Erik Johnson penalty late in the first that overlapped into the opening 96 seconds of the second period, the middle frame was played completely at full strength and the Blackhawks found some rhythm. In fact, they dominated the period. Chicago was credited with 17 shots on net to seven for the visitors. Only one of those shots found the back of the net; Jonathan Toews won a puck battle and then went to the front of the net and won again to cut the lead in half.

Toews goal came with assists to Seth Jones and MacKenzie Entwistle, who returned to the lineup.

Chicago had to feel good about the effort in the second period and Colorado threw them a couple bones early in the third. Nathan MacKinnon went to the box 34 seconds into the period and was joined there by Tyson Jost 56 seconds later.

With the two-man advantage, the Blackhawks took advantage. Alex DeBrincat tied the game at two.

With MacKinnon out of the box, Chicago decided to add a third goal and take the lead. DeBrincat’s second power play goal of the night turned the tables completely on the Avs.

The goals came 40 seconds apart. Seth Jones and Patrick Kane picked up assists on the first PPG. Kane and Dylan Strome were credited with apples on the second.

Predictably, the Avs cranked up the physical play now chasing one goal after having a two-goal lead in the first period. At 11:44 into the third, Erik Johnson scored his second of the night to tie the game at three.

Both teams put a rush on as the period continued and Fleury got some help from the corner of the net late in the period. Toews sprinted up the ice and rifled a shot on net that was saved by Darcy Kuemper at the horn to close out regulation. We were headed to overtime.

Dach won eight of 19 faceoffs and had three shots on net in 21:24 regulation. Toews won 12 of 22 at the dot and was credited with two shots on net in 17:23 in the first three periods. It was Dach who started overtime with Seth Jones and Philipp Kurashev — a different look for the Blackhawks. And Dach lost his first two faceoffs in the opening seconds of the overtime.

DeBrincat and Kane then came out with Calvin de Haan. Kane almost had a breakaway attempt but Devon Toews was able to break up the play.

Jones and Toews were joined by Brandon Hagel. Toews danced through traffic and got a shot off but it hit the iron. It was a vintage, circa-2009 move from Toews that he just missed finishing. The posts made as many saves as the goaltenders in OT at this point.

Half-way through the overtime, Cale Makar made a ridiculous play. He undressed Dach with a cut back and then deked Fleury before roofing a back-hand shot. The play was… Patrick Kane-like. And from a defenseman!

Chicago lost 4-3 and remains winless in 2022, but this effort was much better than the previous two efforts since the shutdown.