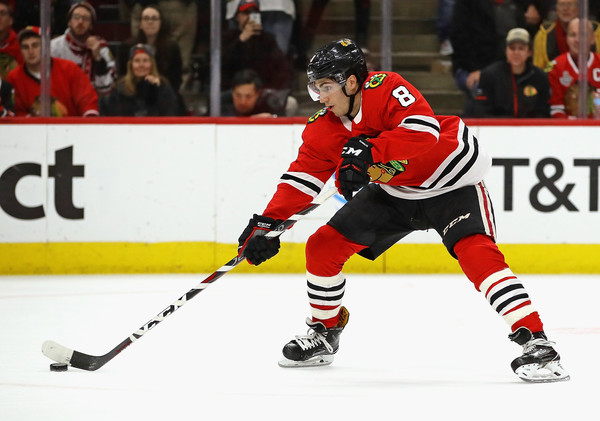 In the midst of the bad from the Blackhawks this season, second year forward Nick Schmaltz has put together a pretty good sophomore campaign.

After putting together six goals and 22 assists in 61 games last year – with a trip to Rockford in the middle of the season – Schmaltz won a permanent roster spot in camp this year and has been skating in a top six role all season. His ice time has increased by more than five minutes per game and he’s already reached the 40-point mark.

In fact, Schmaltz came into Friday night’s game against the San Jose Sharks with the same season line as Jonathan Toews; 16 goals and 24 assists. And Schmaltz had accomplished the numbers in four fewer games.

It was only fitting, then, that Schmaltz would have an assist on the Blackhawks’ first goal of the night and score the second to celebrate his birthday.

The first period of Friday night’s game was brutal. Long, boring and the 0-0 score gave the hockey that was played too much credit. San Jose out-shot Chicago 15-11. Neither team scored.

However, in the second the Hawks got on the board when Jan Rutta put home his sixth of the season to give the Blackhawks a 1-0 lead.

Anthony Duclair was credited with the second assist on the Rutta goal.

The Hawks out-shot the Sharks 13-10 in the second and JF Berube made the saves he needed to keep San Jose off the board.

Only two minutes into the third period, Schmaltz scored his 17th of the season off a pretty pass from Duclair to extend the Blackhawks’ lead to two.

The next goal came 10 minutes later, and unfortunately it came off the stick of Timo Meier. The Sharks were within one with 7:51 left in regulation.

Chicagos’ best line all night was their new-look third line of Schmaltz, Duclair and Alex DeBrincat. The three youngsters showed a lot of speed and creativity with the puck – something that has been lacking all year.

For what it’s worth, Tomas Jurco skated with Artem Anisimov and Patrick Kane for the majority of his shifts in what can best be described as a showcase… we hope. Jurco missed a wide open cage inside the final minute with Martin Jones on the bench for San Jose but Anisimov scored his 17th of the season to keep pace with the birthday boy.

Berube had a marvelous night in his first start with the Blackhawks. He made 42 saves against 43 shots as the Hawks won their second straight game.