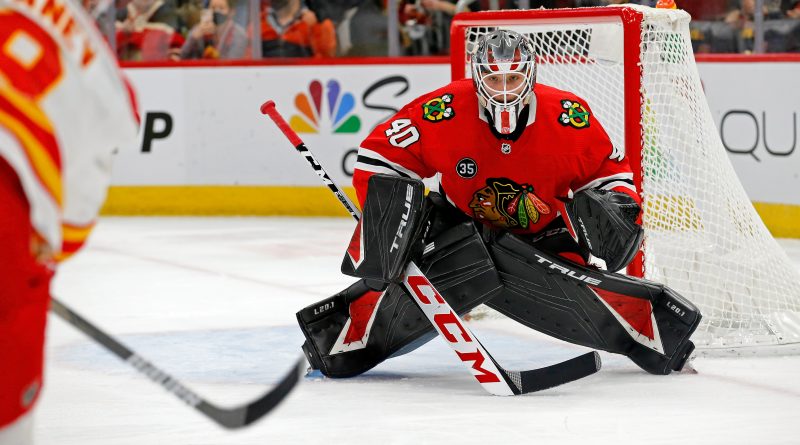 After not playing between Dec. 18 and Jan. 1, the Hawks finally returned to the ice. Unfortunately, hockey-craving fans in Chicago were treated to offensive displays at the expense of the Blackhawks’ defense.

Instead of breaking down the details of a 6-1 loss to Nashville or a 5-1 loss to Calgary, what can we take away from the two games?

First, Arvid Söderblom was impressive on Sunday night against the Flames. With the exception of an ugly goal to Johnny Gaudreau with less than 90 seconds left in regulation, Söderblom kept the Hawks in the game for most of the first 57 minutes. He has a .915 save percentage in Rockford in nine appearances this season and got the call to start when Kevin Lankinen joined Marc-André Fleury in COVID protocol. Fleury was available and backed up Söderblom on Sunday. The rookie stopped 37 of 41 Sunday night after allowing three goals against 18 shots on Saturday against Nashville. He’s 22 years old and has a $883,750 cap hit next year; Fleury, Lankinen and Collin Delia are all free agents after the 2021-22 season.

Erik Gustafsson shouldn’t wear a Blackhawks’ sweater again. I know this sounds like a broken record, but what exactly does he bring to the table that one of the younger players in the organization doesn’t? Coach Derek King tried him with Riley Stillman on Saturday and it didn’t work. So he tried him with Caleb Jones on Sunday and… they were chasing the puck, too. The common denominator: Gustafsson sucks. When Stan Bowman brought him back most onlookers wondered what the hell he presented to the organization that one of Ian Mitchell, Wyatt Kalynuk and/or Nicolas Beaudin doesn’t other than experience; his track record would tell us he isn’t good, for what that’s worth. He needs to go, but who would take him in the NHL at this point? He was a training camp cut that somehow got an NHL deal from Bowman.

Special teams are a mess. Calgary scored a power play goal and a short-handed goal in the second period to take a 3-1 lead; Nashville scored two power play goals on Saturday. On the radio broadcast of the Hawks’ game on Sunday there was a conversation during the third period about the Blackhawks playing somewhat effective hockey at even strength in the last two games. Here’s the problem: the Hawks are one of the worst 5-on-5 offenses in the NHL. So when you can’t score and your special teams are a debacle, what do you get? A lottery pick.

Why the hell is Kurtis Gabriel here? He skated in place of Ryan Carpenter on Sunday… well, he saw 6:39 on the ice and hit someone five times against Calgary. To our earlier point about the Blackhawks being awful offensively, what do you expect when you’re dressing at least two of Gabriel, Carpenter and Juhjar Khiara? They provide nothing but physical play, which is a need… but what good is Gabriel for six minutes? Carpenter and Khiara have killed penalties at least. And the Hawks shouldn’t have both of them on the roster. Gabriel is here to hit people and maybe fight. That’s great if you have 11 other forwards who can score. The Blackhawks have… three forwards who have shown the ability to score this year. And the only one who’s doing it with any consistency is Alex DeBrincat.

Kirby Dach‘s been okay the last couple games. He’s won eight of 21 faceoffs (better than his 32 percent this season) and has five shots on goal in two games. Need to see him attack more consistently and continue improving at the dot. Two games isn’t enough of a sample size to have a parade for him, but Dach is approaching a contract decision with the organization. We can’t get hyped for 38 percent at the dot and no points.

Sorry, have to circle back to this. Gustafsson sucks and needs to go away.

The Blackhawks are going to sell at the deadline, but the unfortunate reality is the players they should remove from the roster either have no value or are going to cost the organization additional assets to deal. Bowman left this team a collection of pieces from different puzzles and now a new head coach and general manager are trying to make them fit together. The next few months are going to see a lot of painful games if the dead weight doesn’t find a new address sooner than later.